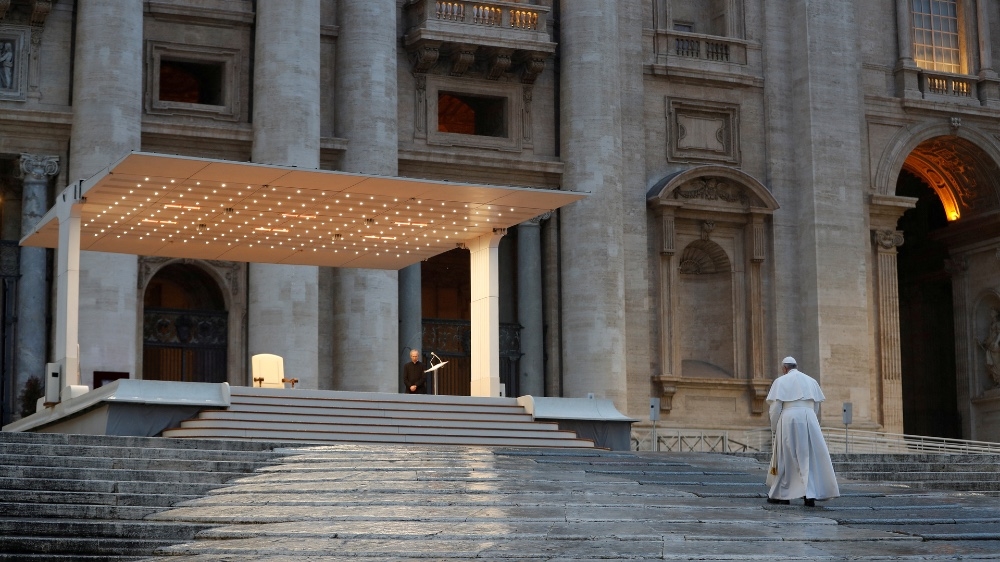 Pope Francis has held a dramatic, solitary prayer service in St Peter’s Square of the Vatican, urging the world to see the coronavirus pandemic as a test of solidarity and a reminder of basic values.
Speaking into an eerily empty square before delivering an extraordinary “Urbi et Orbi” (to the city and the world) blessing, the pontiff said on Friday that the health crisis put everyone “in the same boat”.
More:

“It has taken over our lives, filling everything with a deafening silence and a distressing void that stops everything as it passes by; we feel it in the air … We find ourselves afraid and lost,” he said.
The Vatican called the service “An Extraordinary Prayer in the Time of Pandemic”, a sombre echo of an announcement by Italian officials minutes earlier that the coronavirus death toll in the country had surged past 9,000.
Francis walked alone in the rain to a white canopy on the steps of the basilica and spoke sitting alone before a square where he normally draws tens of thousands of people, but which is now closed because of the pandemic.

“We have realised that we are in the same boat, all of us fragile and disoriented, but at the same time important and needed, all of us called to row together, each of us in need of comforting the other,” he said.
Francis said the virus had exposed people’s vulnerability “to those false and superfluous certainties around which we have constructed our daily schedules”.

He praised doctors, nurses, supermarket employees, cleaners, caregivers, transport workers, police and volunteers, saying they, and not the world’s rich and famous, were “writing the decisive events of our time”.
The leader of the world’s 1.3 billion Roman Catholics said God was asking everyone to “reawaken and put into practice that solidarity and hope capable of giving strength, support and meaning to these hours when everything seems to be floundering”.
He prayed before a wooden crucifix which is normally kept in a Rome church and brought to the Vatican for the special service.
According to tradition, a plague that hit Rome in 1522 began subsiding after the crucifix was taken around the streets of the Italian capital for 16 days in 1522.

Pope Francis is the leader of the world’s 1.3 billion Roman Catholics  [Guglielmo Mangiapane/Reuters]

Kenya police under fire over ‘excessive force’ as curfew begins

Catholic voters have an opportunity in November to help elect only the second Catholic president in U.S. history in former Vice President Joseph R. Biden, but already the more devout followers are lining up behind President Trump. Gone are the days when nearly 80% of Catholic voters united to push Irish-Catholic Democrat John F. Kennedy… 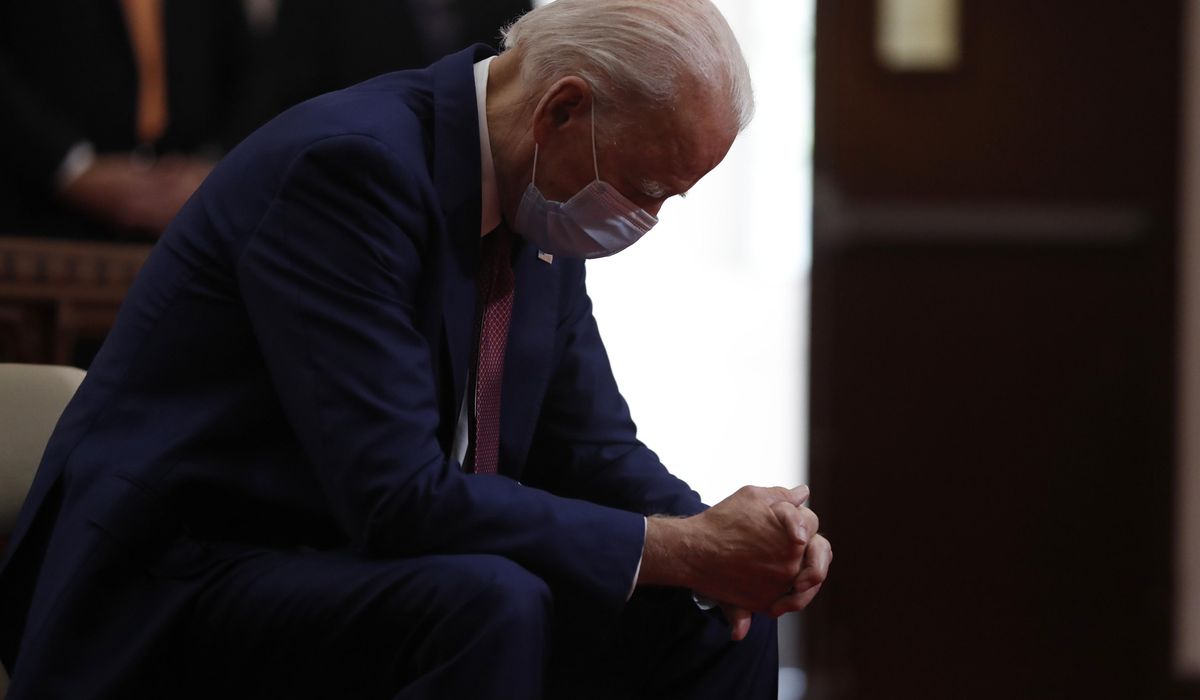 Catholic voters have an opportunity in November to help elect only the second Catholic president in U.S. history in former Vice President Joseph R. Biden, but already the more devout followers are lining up behind President Trump.

Gone are the days when nearly 80% of Catholic voters united to push Irish-Catholic Democrat John F. Kennedy into the White House in 1960. Catholic voters today are split on the 2020 candidates, even though Mr. Biden is a lifelong Mass-attending Catholic, and Mr. Trump is a Presbyterian.

“The Catholic vote is not a monolithic vote in America,” said Brian Burch, president of the conservative CatholicVote. “We’ve moved away from that kind of tribal, if-he’s-a-Catholic-therefore-I-trust-him view. There are other reasons inside our own church for that as well. It’s not enough to merely say you’re Catholic.”

While Mr. Biden is known for his regular church attendance — he and his wife Jill Biden worship at St. Joseph on the Brandywine in Greenville, Delaware — polls show his supporters within the church tend to be less fastidious in their Sunday habits.

“Among Catholics who do practice the faith in a substantive way, yes, there’s been a dramatic shift over the last several decades away from the Democratic Party and into the Republican Party, and I think it’s been especially pronounced under President Trump,” Mr. Burch said.

He cited not only the abortion issue, on which Mr. Trump has been widely described as the most pro-life president ever, but his appeals to “this notion of the importance of place, of country, of patriotism, of family, of meaningful work,” as well as his political grit in the face of opposition.

“His policies are demonstrative proof of his pro-life credentials, but more important, and I increasingly hear this from Catholics, are his fortitude and courage,” Mr. Burch said. “Many Republican administrations in the past have paid lip service to the issue, and while they might be sympathetic to our cause, when things got difficult, they abandoned ship.”

Both camps are making plays for Catholic voters, and for good reason: Not only do they make up 22% of the U.S. electorate, but in nine of the last 10 presidential elections, Catholics voted with the winner, Mr. Bunson said.

Mr. Biden has sought to press his advantage with regular references to his faith. In a video released before the Democratic National Convention, he recalled meeting Pope Francis and talking with several nuns during a visit to the Vatican.

“That’s what in my experience — being raised Catholics and being educated by the nuns — that’s those lovely women I’m talking to symbolized to me,” Mr. Biden said in the video. “We are our brother’s keeper. We have an obligation. I think that’s the only way we’re going to make the world better and safer.”

DNC emcee Julia Louis-Dreyfus, who starred in “Seinfeld,” managed to ding Mr. Trump and showcase Mr. Biden’s churchgoing in her crack about the president’s appearance in front of St. John’s Episcopal Church after it was torched by rioters.

“Just remember, Joe Biden goes to church so regularly that he doesn’t even need tear gas and a bunch of federalized troops to help him get there,” said Ms. Louis-Dreyfus.

For traditional Catholics, however, Mr. Biden remains a hard sell, given his pro-choice stance on abortion and his opposition to conscience exemptions for religious organizations, business owners and medical professionals under Obamacare.

Then there’s Mr. Biden’s running mate. Sen. Kamala D. Harris, California Democrat, is viewed on the right as overtly hostile to Catholics based on her December 2018 grilling of federal judicial nominee Brian Buescher over his membership in the Knights of Columbus.

The Catholic Association described Ms. Harris, a Baptist, as “the ringleader of the anti-Catholic bullying stance adopted by the Democratic Party.”

“With Harris now joining the race to become the next Vice President of the United States, Catholics are (rightfully) concerned about what the future of the country has in store, and whether the anti-Catholic sentiments will only get worse,” TCA said in an Aug. 13 statement.

Mr. Trump had a strong showing with Catholics in 2016. Pew Research said he won the Catholic vote by 52%-46% over Democrat Hillary Clinton, although other measures have characterized the results as more of a toss-up.

Mr. Biden’s greatest strength may lie with Hispanic Catholics. While 59% of White Catholics plan to vote for Mr. Trump, according to Pew, 65% of Hispanic Catholics support the Democrat — in both cases a number more in line with people of their ethnicity regardless of religion.

There was a similar split in 2016, with 64% of White Catholics backing Mr. Trump and 78% of Hispanic Catholics supporting Mrs. Clinton.

Even though no Catholic has been elected president Mr. Kennedy, since 2004 there has been a Catholic on at least one of the major party tickets. The last Catholic presidential nominee was Democrat John Kerry, who lost to President George W. Bush in 2004.

Ironically, if Mr. Biden is denied the presidency in November, it may be conservative Catholics who stand in his way.

“I expect record turnout among Mass-attending Catholics,” said Mr. Burch, “given the existential stakes of this election.”