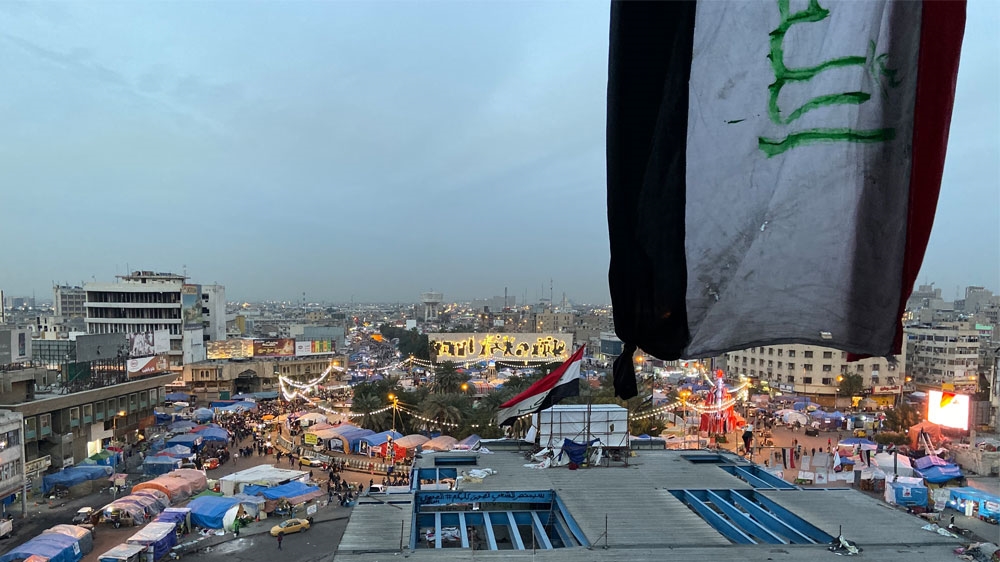 Baghdad, Iraq – In the late hours of a crisp winter’s night, Ahmed al-Rikabi and others are huddled under blankets in a tent in Baghdad’s Tahrir Square.
For these men, most of whom did not know each other before coming to the square but have now formed strong friendships, this tent has been home for almost three months. They are but few of thousands of young Iraqis who have taken to the streets in an effort to change Iraq’s political system – a system which, since 2003, has been dominated and defined by foreign powers and corruption.
More:

OPINION: The Iraqi people will pay the price for Iran-US rivalry, again

Across the Tigris River, in the capital’s Green Zone, momentum has been building for an effort by pro-Iranian politicians to expel United States forces from the country in the wake of last week’s US assassination of Iranian commander Qassem Soleimani and Iraqi militia leader Abu Mahdi al-Muhandis near Baghdad’s airport.
A non-binding parliamentary motion tabled on Sunday passed with a landslide – though almost all Kurdish and Sunni ministers of parliament boycotted the vote.
Yet, while the political tide is moving in one direction, those in the square – the hub of the months-long protest movement – are not convinced it is flowing the right way.
For some like al-Rikabi, there is the fear that the Baghdad elite may try to hijack the sacrifices of his fellow protesters – at least 500 have been killed in a vicious clampdown by security forces since October – and many of those in Tahrir Square allege that Iran was partly to blame for it.
“We here have all seen and felt what this government has done,” al-Rikabi said. “They have done it with Iranian help, they did it with Qassem Soleimani too.”
Meanwhile, there was President Donald Trump’s threat of sanctions in the event of a US withdrawal.
“It’ll make Iranian sanctions look somewhat tame,” Trump warned, referring to the punishing economic measures reimposed by Washington as part of a “maximum pressure” campaign against Tehran.
That threat evoked memories of the 1990s when Iraq’s economy and infrastructure was punished by crippling sanctions in the wake of President Saddam Hussein’s invasion of Kuwait – then it was the people who paid the price.
We don’t want our politicians to force us into camps to either be pro-US or pro-Iran.
Sajad Jiyad, managing director of Bayan Center

For some in Parliament, the killing of Soleimani and al-Muhandis was the final straw for an unwelcome US presence in the country that had already lasted too long.
Baghdad’s political class claims it has galvanised political support for Tehran and Iraq’s pro-Iran leaders.
“They lost a person [Soleimani] but they regained the people,” said Sami al-Askari, a former minister of parliament and chief of staff to former Prime Minister Nouri al-Maliki.
“I think the Iranians have now won most of the Iraqi Shias, even the voices against Iran have vanished.”

For almost three months, thousands of Iraqis have taken to the streets in an effort to change Iraq’s political system [Gareth Browne/Al Jazeera]

Yet for many protesters, the assassination of Soleimani in Baghdad and the events that followed – including Iran’s retaliatory missile strikes on Wednesday at Iraqi bases housing US troops – raised fears their country could become a playground of conflict between Tehran and Washington.
“We do not hate America, we just want the world to respect our sovereignty. This is about Iran just as much – it is about anyone who tries to violate our sovereignty,” said Asrhad al-Karbali, who said he gave up his job as a policeman to come to Tahrir.
Others said the effort by some politicians and militia heads to capitalise on the moment laid bare a significant disconnect between those who have camped out in cities across the country and Iraq’s political class.
“We don’t want our politicians to force us into camps to either be pro-US or pro-Iran – I don’t think that’s healthy,” said Sajad Jiyad, managing director of Bayan Center, a think-tank based in Baghdad.
“For the average Iraqi, the protesters, they don’t want to be talking in terms of the US and Iran,” he added. “They want to be talking about what’s happening for us on the ground in terms of services, the protection of rights and political reforms”.
Continue Reading…

President Trump’s two highest-profile counterterrorism victories have been largely absent from his reelection pitch, a departure from recent elections in which the winning candidate made a prominent case for fortitude in battling jihadis. Unlike President George W. Bush, who ran for reelection during his war on terror, or President Obama, who made the raid that… 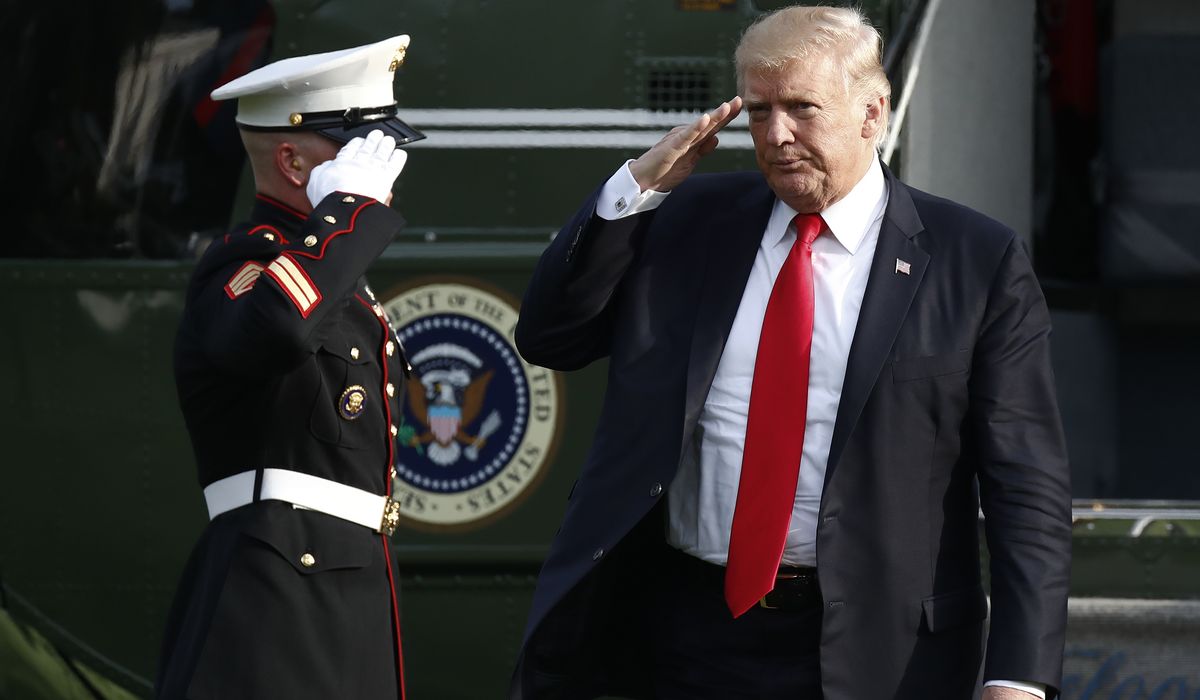 President Trump’s two highest-profile counterterrorism victories have been largely absent from his reelection pitch, a departure from recent elections in which the winning candidate made a prominent case for fortitude in battling jihadis.

Unlike President George W. Bush, who ran for reelection during his war on terror, or President Obama, who made the raid that killed 9/11 mastermind Osama bin Laden a cornerstone of his 2012 campaign, Mr. Trump and his team have yet to fully capitalize on the president’s successes against terrorism.

Neither the mission in October that resulted in the death of Islamic State leader Abu Bakr al-Baghdadi nor the January strike that killed Iranian Maj. Gen. Qassem Soleimani has been given significant attention in Mr. Trump’s battle with presumptive Democratic nominee Joseph R. Biden.

The successful operations, which eliminated two of the world’s most powerful and dangerous terrorist leaders and seemingly offer powerful ammunition for a commander in chief who prides himself on strength, have been mostly missing from Mr. Trump’s recent speeches. His campaign also hasn’t made them the focus of a major concerted advertising blitz in the way political observers might expect.

Analysts say there are several reasons why. The COVID-19 pandemic and its associated economic free fall, as well as recent racial justice protests, have consumed so much political space that there is little room for foreign policy on the campaign trail let alone a serious appetite among voters to hear about it.

But political insiders say other factors are also at play. They say a more aggressive pitch on the president’s counterterrorism successes could backfire.

One concern is that the deaths of al-Baghdadi and Soleimani, while important victories in the fight against extremism, wouldn’t have the same emotional impact among voters as bin Laden’s demise.

“Another complicating factor in getting that positive message out is that since many of our 2016 campaign advisers were framed as Russian agents by the #Resistance, including Democrats in Congress and legacy media, it could be safer for the current campaign to avoid foreign policy altogether,” he said.

The Biden campaign and its liberal allies have been taking the foreign policy fight to Mr. Trump. They say the president has been soft on Russia, bungled relations with China, unnecessarily stoked tensions with Iran, abandoned American allies in Syria and made a host of other serious missteps.

The backdrop of the political attacks is broader turmoil inside the Trump campaign.

Although campaign officials denied that Mr. Parscale had been punished or demoted, the development added to an appearance of internal upheaval at a moment of questionable polling numbers for the president.

Recent polls have shown Mr. Biden with a commanding lead over Mr. Trump nationally and in key battleground states.

One of the big questions heading into the campaign’s final three months centers on the extent to which Mr. Trump may or may not try to steer public attention toward his foreign policy record.

As it tries to regain its footing, the Trump campaign seems willing to fight over foreign policy when attacked. Top campaign officials are quick to contrast the president’s record with that of Mr. Biden, who served as vice president while the Islamic State rose to power in Iraq and Syria.

Mr. Biden and Mr. Obama also oversaw the Iran nuclear deal, which lifted some economic sanctions on Tehran but, as critics assert, allowed millions of dollars to flow to Soleimani’s Quds Force and the various terrorist outfits it backs across the Middle East.

A matter of messaging

Trump campaign officials say they are aware of the president’s wins on counterterrorism and are prepared to tout them publicly within a wider narrative of national security success over the past four years.

“President Trump kept his promise to rebuild the American military after it was severely depleted under the Obama/Biden administration,” Ken Farnaso, the campaign’s deputy national press secretary, told The Washington Times. “And his ‘America First’ agenda has secured the elimination of two most-wanted terrorists, Abu Bakr al-Baghdadi and Qassem Soleimani, the destruction of the ISIS caliphate, and sustained strong political and economic pressure on adversaries like Iran, Venezuela and Russia.”

The president and his surrogates have made those arguments, but there are key differences between the way the Trump campaign is handling the issue this year and how the Obama camp approached it in 2012.

Mr. Obama was reelected in the year after the raid that killed bin Laden, capping nearly a decade of searching for the man behind the 9/11 attacks. The Obama campaign team used the event as a sharp political weapon and suggested that Republican nominee Mitt Romney might not have ordered the mission as commander in chief.

The narrative proved effective in portraying Mr. Obama as a strong, decisive leader and blunting Republican efforts to once again cast a Democrat as weak on international affairs.

One of the more memorable campaign advertisements of 2012 featured former President Bill Clinton saying it was a momentous decision for Mr. Obama to order the assault on bin Laden’s secret compound in Abbottabad, Pakistan.

“Suppose the Navy SEALs had gone in there and it hadn’t been bin Laden. Suppose they’d been captured or killed. The downside would have been horrible for him,” Mr. Clinton said in the commercial. “He took the harder and the more honorable path, and the one that produced, in my opinion, the best result.”

The ad then asked, “Which path would Mitt Romney have taken,” before highlighting the Republican’s questioning about whether the U.S. should launch counterterrorism strikes in Pakistan or spend time and resources searching for a single terrorist leader.

Mr. Trump has aired some memorable campaign commercials, but some political analysts say none has brought his counterterrorism achievements to the forefront the way the Bill Clinton ad did for Mr. Obama.

Some specialists also argue that there may be little the Trump campaign can do at this point to effectively capitalize on the al-Baghdadi and Soleimani operations.

Talking about the strikes or crafting multimillion-dollar ad campaigns to highlight foreign policy achievements of the past, they said, likely would turn off voters who are rightfully consumed with domestic crises playing out at the moment.

“When you have people dying at the numbers they’re dying at in the United States right now, the threat from international terrorism seems to pale by comparison,” said Stephen Zunes, a professor at the University of San Francisco who studies the intersection of politics and foreign policy.

“If Trump embraced that,” Mr. Zunes said, “it could even backfire.”

What’s behind the Qassem Soleimani assassination?

MUST-SEE PROGRAMMESNewsFeed Iranians and Iraqis react to Soleimani’s killingIranians and Iraqis react to the killing of General Qassem Soleimani, the head of Iran’s elite Quds Force.Iran, Middle East, Donald TrumpNewsFeedTop Iranian general killed in US attackGeneral Qassem Soleimani, the head of Iran’s elite Quds Force, has been killed in a US attack in Baghdad.Soleimani assassination, Iran, Middle EastNewsFeedProtesters storm US embassy in BaghdadThe US says it is sending 750 troops to the Middle East after its embassy in Baghdad was stormed by protesters.Iraq, Middle East, United StatesNewsFeedIndia’s tourism industry hit by citizenship protestsTourist numbers have dropped significantly in India after a wave of protests against a new citizenship law. Narendra Modi, Asia, India