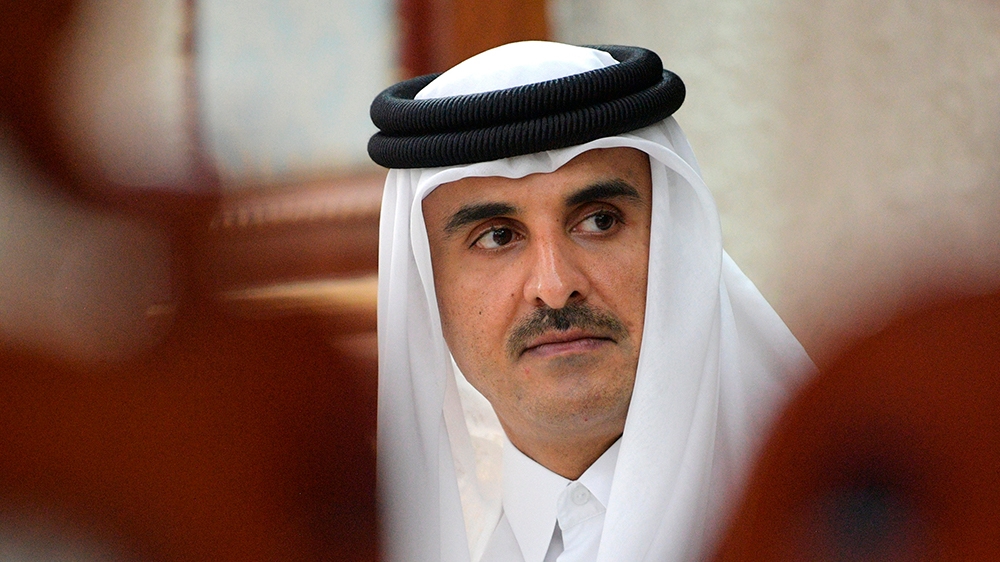 Qatar’s Emir Sheikh Tamim bin Hamad Al Thani has arrived in Iran’s capital, Tehran, to hold talks with senior officials, including President Hassan Rouhani.
The visit on Sunday comes amid heightened tensions in the Gulf following the US assassination of top Iranian commander Qassem Soleimani in Baghdad and Iran’s retaliatory missile strikes at US targets in Iraq.
More:

Iran launches missile attacks on US facilities in Iraq

US-Iran tensions: What war powers does Trump have?

State-run Qatar News Agency (QNA) said the talks will focus on “bilateral relations between the two countries and ways of promoting and enhancing them, as well as the latest developments in the region and the regional and international issues of mutual concern”.
Qatar, which is close to the US but also has strong ties with Iran, with which it shares the world’s largest gas field, has called for a peaceful solution to regional tensions.
“He is the first national leader to come here” since Soleimani’s killing on January 3, Al Jazeera’s Assed Baig, reporting from Tehran, said.
Sheikh Tamim is accompanied by an official delegation in his first trip to Iran since becoming emir in 2013.
Earlier on Sunday, the Qatari emir headed to Oman’s capital, Muscat, where he offered his condolences to the Gulf state’s new sultan, Haitham bin Tariq Al Said, for the death of his predecessor, Sultan Qaboos bin Said Al Said.

Emir of Qatar will be in Tehran shortly for the first time and meeting with Iranian President Hassan Rouhani #SoleimaniAassination #emirofqatar #AlJazeeraEnglish
— Dorsa Jabbari (@DorsaJabbari) January 12, 2020

‘Reduce escalation’
A day after the January 3 killing of Soleimani, the head of the overseas wing of the elite Islamic Revolutionary Guard Corps, Qatari Foreign Minister Sheikh Mohammed bin Abdulrahman Al Thani met his Iranian counterpart, Mohammad Javad Zarif, in Tehran.
The two officials discussed the latest developments in the region, “especially the events in Iraq as well as ways of calm to maintain collective security of the region,” QNA reported at the time.
On Wednesday, Sheikh Mohammed said Qatar is closely following developments in Iraq and seeking to coordinate with friendly countries to reduce tensions.
“We seek through a series of communications to consult and coordinate with friendly and brotherly countries to calm and reduce escalation,” he wrote on Twitter.
Continue Reading…

World leaders pour into Oman to offer condolences for Qaboos