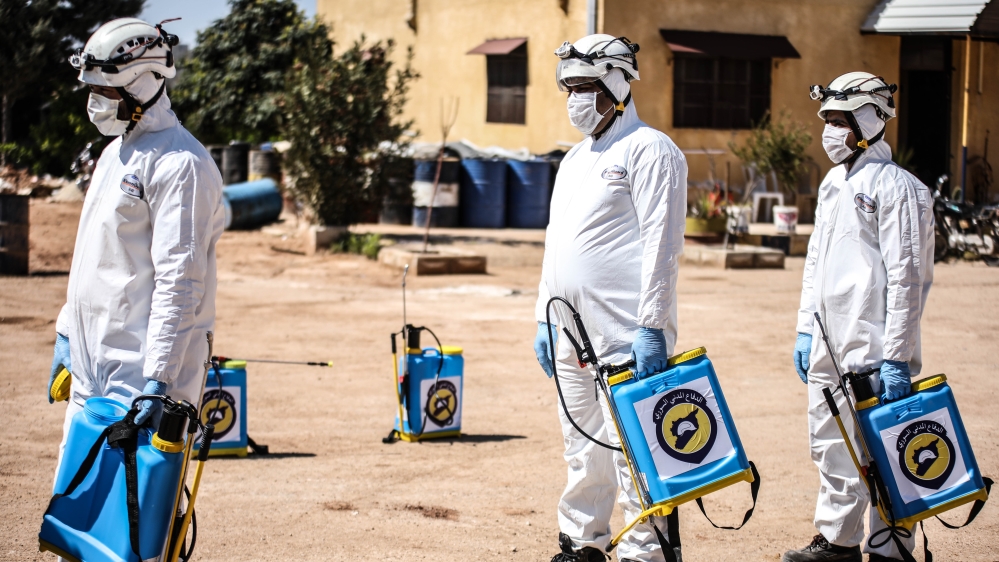 For years now, Moustafa Youssef has been rushing to buildings flattened by heavy bombardment, risking his life to pull out people trapped underneath the rubble.
But these days, the 47-year-old is among the thousands of first responders in Idlib, a war-battered province in northwest Syria that is home to more than three million people, who have engrossed themselves in the battle against the new coronavirus pandemic.
More:

How long will the Turkish-Russian deal on Idlib last?

The White Helmets or Syrian Civil Defence is a volunteer search-and-rescue group that operates in rebel-held parts of Syria. Earlier this week, it launched an awareness and sterilisation campaign amid mounting fears over a major outbreak after the government confirmed the country’s first coronavirus case – although unconfirmed reports had previously claimed that the rapidly spreading virus had already infected people in Syria.
“We fear that another disaster may unfold and hit civilians who are crammed in this overcrowded region,” Youssef told Al Jazeera.
“Unfortunately, we as a struggling region are not exempt from this pandemic, so we must be prepared to fight it despite the other challenges we’re facing here,” Youssef said.

Members of the Syrian Civil Defence, also known as the White Helmets, sterilise a school in the area of Ghosn al-Zeitun in Afrin [Aaref Watad/AFP]

As part of the recently launched campaign, the volunteers have been split into two teams. The first is tasked with raising awareness about the nature of COVID-19, the disease caused by the new coronavirus, as well as its symptoms and preventive measures.
The second is responsible for sanitising streets, camps, schools, mosques and other public spaces.
To date, the initiative has managed to cover all areas in northern Syria that are within the White Helmets’ reach, including Turkish-controlled Afrin in the adjacent northeast.
“More than anything, we wanted to portray the seriousness of the issue and the importance of following the precautionary measures to prevent yet another humanitarian catastrophe here,” Ahmed Sheikho, a spokesperson for the group, told Al Jazeera.
“Our volunteers have walked through public spaces, including local markets, and have held signs and distributed brochures that explain to people the importance of staying home unless absolutely necessary,” he said.
Still, challenges remain. Health experts recommend physical distancing as a protective measure but Youssef said it has been hard for volunteers to convince people of the seriousness of the threat while acknowledging that “self isolation” may be an impossible ask.
‘Take it as it comes’
Syria’s weak healthcare system has been decimated by nearly a decade of war that has displaced millions of people and spawned rampant poverty.
The situation is especially dire in the country’s northwest, with many warning that an outbreak would be “catastrophic”.
Due to the large number of medical facilities and hospitals that have been put out of service, Sheikho said the lack of supplies “already places us in a compromising position in the case of an outbreak”.

Since December last year and up until early March, an escalation in fighting following the launch of an offensive by Syrian government troops, backed by Russia and Iran, displaced nearly one million people, many of whom amassed in the already overcrowded camps near the sealed border with Turkey.
Volunteers Al Jazeera spoke to stressed that their main concern is that an outbreak could spread quickly in crowded camps for displaced people, most of whom have limited access to clean, running water – health experts recommend frequent and thorough hand-washing with water and soap to protect against the new coronavirus.
The months-long offensive in the Idlib region meanwhile has left aid agencies unable to respond to the overwhelming surge of new arrivals at the camps. Many of those who fled the fighting have been forced to share their tents with others while some sleep out in the open or inside their vehicles.
“We honestly do not have long-term solutions in case of a potential outbreak in the displacement camps,” Youssef said.
“We will just have to take it as it comes.”

‘Double-role’
According to the World Health Organization (WHO), testing for the highly infectious virus in Idlib is due to begin on Wednesday.
Three hospitals with intensive care units have been modified as isolation units equipped with ventilators, WHO spokesman Hedinn Halldorsson said.
Up to 1,000 healthcare workers have been mobilised, and a new delivery of protective gear, including 10,000 surgical masks and 500 respirator masks, are due to arrive.
While saying that this is a positive step, volunteers stress that they need more support from international NGOs, especially in the event of a renewed offensive.
Meanwhile, the United Nations special envoy for Syria has called for an immediate nationwide ceasefire to enable an “all-out-effort” to combat the virus.
“Syrians are acutely vulnerable to COVID-19,” Geir Pedersen said.
“To confront this danger, the long-suffering Syrian people desperately need a sustained period of calm throughout the country respected by all parties,” he said.
Mounir Moustafa, deputy head of the White Helmets in Idlib, echoed Pedersen’s comments.
“If countries with viable economies are struggling to cope, how can a region like ours, battered by war and lacking basic supplies, face this deadly pandemic?” Moustafa asked.
Though a Russian-Turkish ceasefire deal agreed upon last month for Idlib seems to still be holding, it is not unusual for such an agreement to quickly falter in Syria.
In the event of renewed bombardment, the volunteers say they are willing to perform a “double-role” – act as first responders, and continue to raise awareness in a bid to contain the spread of the coronavirus.
According to Moustafa, 39, the group’s ultimate goal is to “preserve and protect human life, whether in war or in a pandemic”.
“Whoever would die from bombardment, could also die from coronavirus. It is our responsibly to help civilians in both scenarios.”