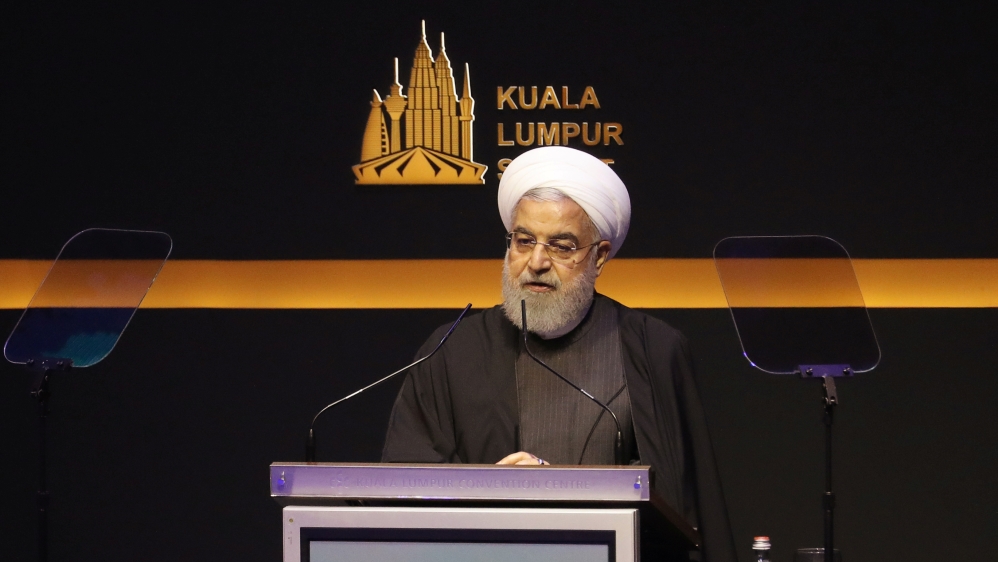 Iranian President Hassan Rouhani has said that his country is enriching more uranium than Tehran did before it agreed to a nuclear deal with world powers in 2015.
“We are enriching more uranium before the deal was reached … Pressure has increased on Iran but we continue to progress,” Rouhani said on Thursday in a televised speech.
More:

Is NATO about to become ‘more involved’ in the Middle East?

Iran has gradually scaled back its commitments under the nuclear deal, signed with the US, China, Russia, Germany, France and the UK, in retaliation for Washington’s withdrawal from the pact in 2018 and its reimposition of sanctions that have crippled the country’s economy.
Earlier in the week, the United Kingdom, France and Germany challenged Tehran over breaking the limits set out in the deal.

Inside the base targeted by Iranian missiles

The European nations announced that they triggered the dispute mechanism provided for in the landmark agreement in order to force Tehran to honour its commitments under the accord, formally known as the Joint Comprehensive Plan of Action (JCPOA).
On Thursday the EU’s top diplomat Josep Borrell held “frank” direct talks with Iran’s Foreign Minister Mohammad Javad Zarif in New Delhi.
“In a frank dialogue, they discussed the latest developments around the Joint Comprehensive Plan of Action,” the European Union said in a statement.
The face-to-face talks on the sidelines of a conference were the first following a series of telephone calls since a US drone strike killed top Iranian general Qassem Soleimani on January 3.
EU officials have said Iran already expressed anger at the European move by telephone.
‘Prevent military confrontation’
Tensions in the region have simmered in recent months after a series of attacks in the Gulf region that the US blamed on Iran and aligned groups, despite denials from Tehran.
Fears of a military escalation soared in early January after the assassination of Soleimani in an air strike in Baghdad, prompting Iran to fire a barrage of missiles at a military base housing US troops in Iraq.
In his speech on Thursday, Rouhani said that the Iranian retaliation – which caused significant material damage but no casualties according to the US military – had strengthened Iranian deterrence against the “threats” of US President Donald Trump.
But despite the continuing tensions, Rouhani said Tehran was working daily “to prevent military confrontation and war” and that dialogue with the world remained “possible”.

The 2015 nuclear deal imposed restrictions on the Iranian nuclear programme in exchange for a reprieve from international sanctions.
After unilaterally withdrawing, the US has reimposed a range of sanctions on Tehran and called for negotiations over a new accord.
Iran has rejected the idea of negotiating a new deal while it is under sanctions.
In response to the US move, Tehran has begun enriching uranium above the cap agreed in the deal and taken further steps to enhance its nuclear programme, while also accusing the European parties to the deal of failing to live up to their own commitments to provide economic relief to Tehran.
Iran had been enriching uranium at 20 percent purity before it signed the deal, which capped enrichment at 3.67 percent.
Al Jazeera’s Assed Baig reporting from Tehran said that Rouhani had sent a defiant message to the world, saying that Iran is reducing committments, but also adding that these reductions are reversible if European countries return to their obligations to that deal.
“He’s saying to European countries that they need to stand up to the US,” Baig said.
“These sanctions have hit Iran’s oil sector, the banking sector and the economy and he accepted this – that Iran’s oil exports have been reduced, but the economy is still working, according to Rouhani.”
Rouhani defended the 2015 nuclear deal in his speech saying, “we have proven in practice that it is possible for us to interact with the world”.
Continue Reading…