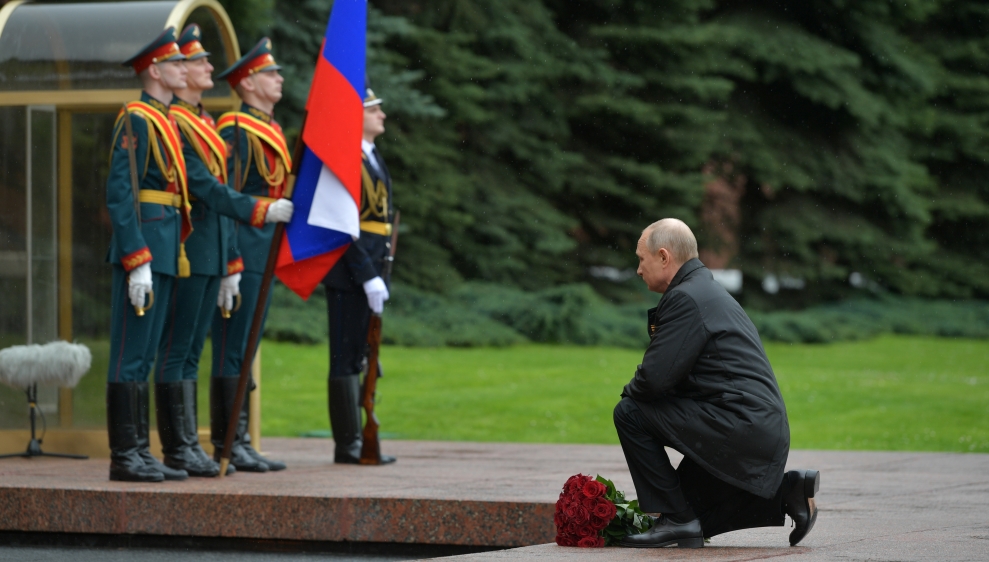 Russian President Vladimir Putin has marked Victory Day, the anniversary of the defeat of Nazi Germany in World War II, in a ceremony shorn of its usual military parade and pomp due to the coronavirus pandemic.
Putin on Saturday laid flowers at the Tomb of the Unknown Soldier just outside the Kremlin walls in the capital, Moscow, and gave a short address honouring the valour and suffering of the Soviet army during the war.
More:

Coronavirus: Can Russia flatten the curve?

Victory Day is Russia’s most important secular holiday. This year’s observance had been expected to be especially large because it marked the 75th anniversary, but a military parade at Moscow’s Red Square and a mass procession called The Immortal Regiment were postponed as part of measures to stifle the spread of the coronavirus.
The only vestige of the conventional show of military might was a flyover of the capital by 75 fighter jets and helicopters.
Al Jazeera’s Oksana Brown, reporting from Moscow, said the city’s streets that were supposed to see tens of thousands of people marching were eerily empty.
“Moscow looks very unusual for this big day for Russia,” she said.
“This was supposed to be a big showcase event for Putin, with many world leaders initially invited. But as the epidemic started growing in March, the Kremlin had to make a very difficult decision to cancel the parade and all the mass events.”
The muted celebrations came as Russia said it had registered an additional 10,817 coronavirus cases over the past 24 hours, bringing the country’s total to 198,676. The death toll rose by 104 to 1,827.
In the final events of the Victory in Europe Day commemoration in Western Europe, which took place a day earlier, Berlin’s landmark Brandenburg Gate was illuminated late on Friday.
The words “Thank You” against a blue backdrop were projected onto the monument in Russian, English, French and German.
Earlier in the day, German President Frank-Walter Steinmeier described May 8 as the day Germany, too, was “liberated” from Nazi dictatorship.
Continue Reading…

Bells have tolled in Japan’s Hiroshima for the 75th anniversary of the world’s first atomic bombing, with ceremonies downsized due to the coronavirus pandemic and the city’s mayor urging nations to reject self-centred nationalism and commit to nuclear disarmament more seriously. Though thousands usually pack the Peace Park in central Hiroshima to pray, sing and… 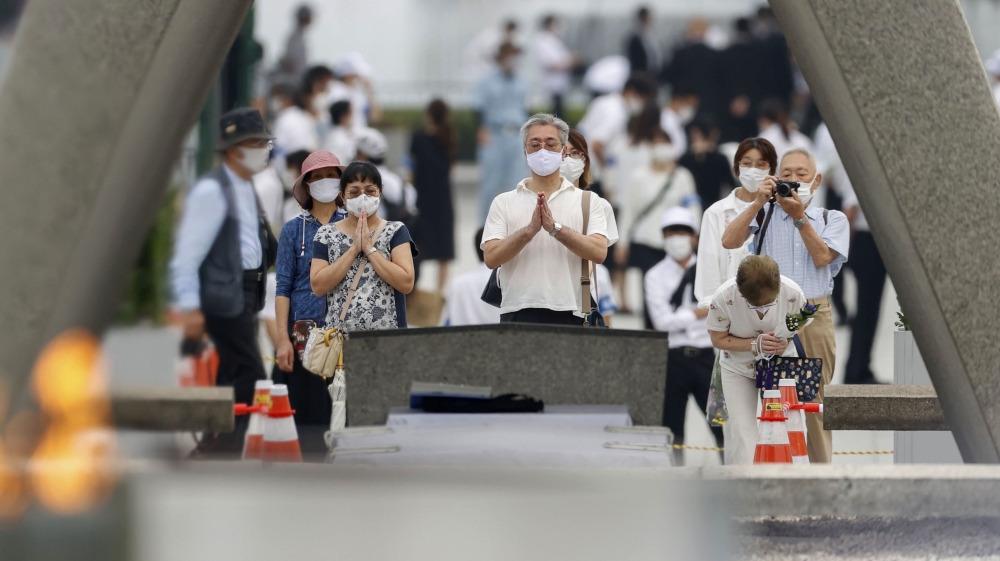 Bells have tolled in Japan’s Hiroshima for the 75th anniversary of the world’s first atomic bombing, with ceremonies downsized due to the coronavirus pandemic and the city’s mayor urging nations to reject self-centred nationalism and commit to nuclear disarmament more seriously.
Though thousands usually pack the Peace Park in central Hiroshima to pray, sing and lay paper cranes as a symbol of peace, entrance to Thursday’s memorial ceremony was sharply limited, with only survivors, relatives and a handful of foreign dignitaries allowed to attend.
Participants, many of them dressed in black and wearing face masks, stood for a moment of silence at 8:15 am, the exact time that the atomic bomb, nicknamed “Little Boy”, exploded on August 6, 1945, obliterating Hiroshima and killing 140,000 of an estimated population of 350,000.
Thousands more died later of injuries and radiation-related illnesses.
“On August 6, 1945, a single atomic bomb destroyed our city. Rumour at the time had it that ‘nothing will grow here for 75 years,'” Mayor Kazumi Matsui said in a speech afterwards.
“And yet, Hiroshima recovered, becoming a symbol of peace.”

Hiroshima Mayor Kazumi Matsui delivers a speech during the 75th-anniversary memorial service for atomic bomb victims at the Peace Memorial Park in Hiroshima on August 6, 2020 [Jiji Press via AFP]

He called on Japan’s government to heed the appeal of survivors and sign the Treaty on the Prohibition of Nuclear Weapons, and urged the world to come together to face global threats.
“When the 1918 flu pandemic attacked a century ago, it took tens of millions of lives and terrorised the world because nations fighting World War I were unable to meet the threat together,” he said.
“A subsequent upsurge in nationalism led to World War II and the atomic bombings. We must never allow this painful past to repeat itself. Civil society must reject self-centred nationalism and unite against all threats.”
Prime Minister Shinzo Abe, in his speech at the ceremony, said Japan is committed to nuclear weapons ban but said a nuclear-free world could not be achieved overnight and that it has to start from dialogue between opposite sides.
“Japan’s position is to serve as a bridge between different sides and patiently promote their dialogue and actions to achieve a world without nuclear weapons,” Abe said.

Elderly survivors, whose average age now exceeds 83, however, criticised what they called the Japanese government’s reluctance to listen to those who suffered from the atomic bombing.
“Many survivors are offended by the prime minister of this country who does not sign the nuclear weapons prohibition treaty,” said Keiko Ogura, 84, who survived the atomic bombing at age eight.
“We need non-nuclear states to help us and pressure the Japanese government into signing.”
The bombing of Hiroshima was followed by the bombing of Nagasaki on August 9, an attack that instantly killed more than 75,000 people.
Japan announced its surrender just days later on August 15, 1945, and some historians argue the bombings ultimately saved lives by avoiding a land invasion that might have been significantly more deadly.
But in Japan, the attacks are widely regarded as war crimes because they targeted civilians indiscriminately and caused unprecedented destruction.
The United States has never apologised for the bombings.
In 2016, Barack Obama became the first sitting US president to visit Hiroshima, where he offered no apology but embraced survivors and called for a world free of nuclear weapons.
Hiroshima and Nagasaki were key stops on Pope Francis’s first trip to Japan last year, where he denounced the “unspeakable horror” of the attacks.

The mushroom cloud billowed about one hour after the nuclear bomb was detonated above Hiroshima [File: U.S. Army via Hiroshima Peace Memorial Museum/AP Photo]