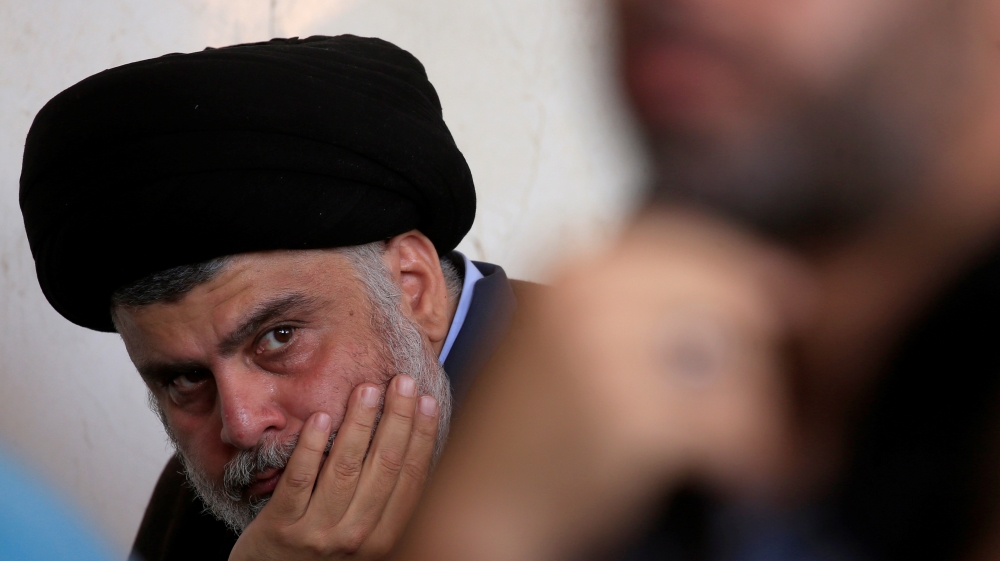 Iraq’s populist Shia leader Muqtada al-Sadr has called for a “million-man march” against the presence of United States troops in Iraq just days after the country’s parliament voted to expel foreign troops from Iraq.
“The skies, land and sovereignty of Iraq are being violated every day by occupying forces,” Sadr, who also leads the Sairoon political bloc, wrote on Twitter.
He told Iraqis to hold “a million-man, peaceful, unified demonstration to condemn the American presence and its violations”, without specifying a date or location for the march.
More:

On January 5, Iraq’s parliament passed a resolution that called on the government to expel foreign troops and cancel its request for assistance from the US-led coalition that had been working with Baghdad to fight the Islamic State of Iraq and the Levant (ISIL or ISIS) group.
Around 5,000 US troops are left in Iraq – most of them soldiers who came to Iraq in an advisory capacity to help the Iran-backed Popular Mobilisation Forces (PMF, or Hashd al-Shaabi), an umbrella group of mostly Iran-backed Shia paramilitary groups, from 2014 to 2017 in their fight against ISIL.
The parliament vote came after US air strikes killed Iran’s General Qassem Soleimani and Iraqi paramilitary commander Abu Mahdi al-Muhandis just outside Baghdad International Airport in a move ordered by US President Donald Trump.
Sadr condemned parliament’s resolution as a “weak response”, saying the move fell short of an appropriate reaction to recent developments in Iraq and calling on armed groups in Iraq to unite.
In a letter to parliament read out by a supporter at the time, Sadr listed a number of demands, including the immediate cancellation of the security agreement with the US, closure of the US embassy, expulsion of US troops in a “humiliating manner”, and the criminalisation of communication with the US government.
On Monday, Sadr held a meeting with leaders of several armed groups within the PMF in the Iranian city of Qom.
The meeting was also attended by Kataib Hezbollah, the Iraqi armed group whose 25 fighters were killed when the US launched air strikes against it on December 30, 2019, in response to the killing of a US civilian contractor two days earlier.
It also included Asaib Ahl al-Haq, the Shia armed group led by Qais al-Khazali, who was blacklisted by the US over his alleged role in killings of demonstrators in Iraq.
Nasser al-Shammari, deputy secretary-general of the Hezbollah al-Naujabaa Brigades, another group that attended the meeting in Qom, said in a statement that discussions revolved around the creation of a “united resistance” and ways to dislodge US and other foreign troops from Iraq.
‘To all Iraqis’
Commenting on the call, Amir al-Kanani, a leader within the Sadrist Movement, which was founded by Sadr, said the proposed march aims to push the government towards taking a quick action following the parliament vote.
“After the parliament voted to expel foreign troops, a timeline for them to move should be set,” Kanani told Al Jazeera. “The call for a march is aimed at all Iraqis in order to increase the pressure on the Iraqi government.”
According to Kanani and a media representative within the PMF, the march may be held this Friday, but details of the demonstration are yet to be confirmed.
“Coordination committees across Iraq will be responsible for finalising when and where the march will be held,” said Kanani. “It might be just in Baghdad or across several major cities.”
Shia groups’ support
Mohamed Mohi, spokesman for Kataib Hezbollah, confirmed with Al Jazeera that the group supported Sadr’s calls, adding that the march might be held in Baghdad’s Tahrir Square due its “symbolic significance”.
Also adding another voice to the call, Jawad al-Talabawi, spokesman for Asaib Ahl al-Haq armed group, told Al Jazeera that the group march aims to bring together all Iraqis to condemn US presence in Iraq.
Naeem al-Aboudi, a member of the Sadiqoon parliamentary bloc, the political arm of Asaib Ahl al-Haq, called on Iraqis to “unite” and join the march, writing on Twitter.

Akram al-Kaabi, leader Hezballah al-Naujabaa Brigades, supported Sadr’s calls.
“This is in support of the million-man march which Sayid Muqtada al-Sadr has called for. We call on our people, who reject humiliation and subjugation, to take part [in the march] raising the moto ‘No to US presence’, and standing united under the Iraqi flag,” Kaabi wrote on Twitter.
Protesters reject call
But in Baghdad’s Tahrir Square, the hub of the protest movement in the capital, demonstrators rejected Sadr’s calls on Tuesday, saying they want escalating tensions between Iran and the US to be moved out of the country.
“We reject these calls [for the march] because they have nothing to do with our demands,” a 20-year-old university student, Jaber al-Khalili, told Al Jazeera from the protests’ roundabout.
“We are not interested in Sadr’s calls or those of any other political leader. We want them [political leaders] all gone.”
Ali Khraybit, a 27-year-old filmmaker and protester, agreed.
“This call is specific to supporters and member of the Shia armed and political groups. These calls have nothing to do with our demands as protesters,” said Khraybit.
“The Sadrists among us might join the march, but the protest movement as a whole won’t. We just want Iran and the US to take their battle away from here [Iraq],” he added.

BackPage 1 of 2Next →
In this article:'million-man, calls