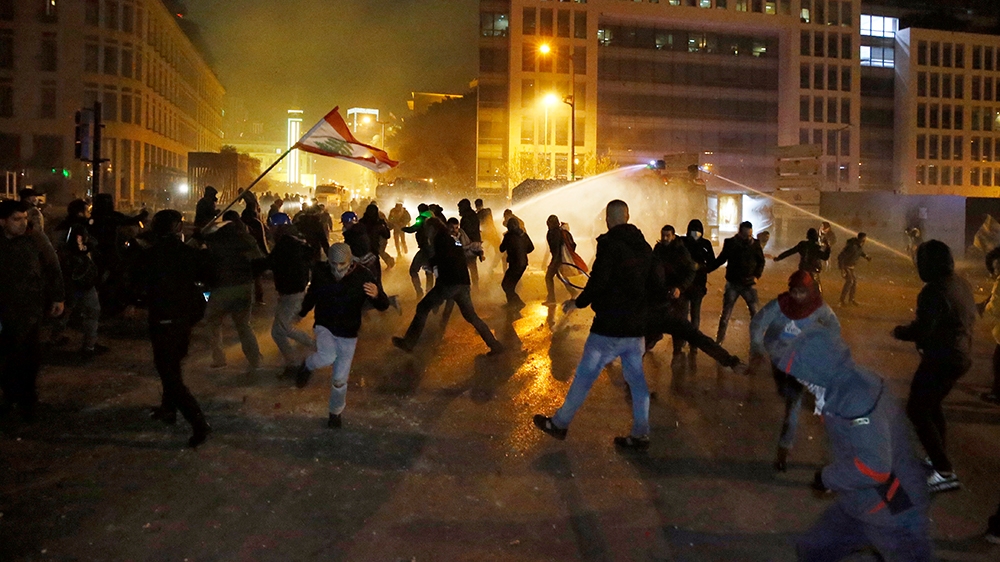 Scores of people have been wounded in Beirut after security forces used tear gas and water cannon to disperse crowds of anti-government protesters trying to reach Martyrs’ Square, the hub of a months-long protest movement calling for changes to Lebanon’s political and financial systems.
On Saturday, demonstrators set out from various spots in the capital in a march towards the city centre under the slogan: “We won’t pay the price.”
More:

But before they all converged near the road leading to Parliament, dozens of protesters flung rocks, traffic signs and tree branches at security forces guarding the institution, local television channels showed.
Security forces sprayed young men with water cannon and lobbed tear gas over a metal fence to disperse remaining protesters on the wet tarmac.
The Red Cross said that more than 160 people from both sides were wounded in the clashes.
“Over 65 people … have been taken to nearby hospitals and over 100 people have been treated at the scene,” a spokesman said.
“A direct and violent confrontation is taking place with anti-riot police at one of the entrances to parliament,” the Internal Security Forces said on Twitter.
“We ask peaceful protesters to keep away from the site of the rioting for their safety.”
They published photos of several wounded policemen and a video showing pillars stripped of their tiles, reportedly to be thrown at security forces.
Al Jazeera’s Zeina Khodr, reporting from Beirut, said: “Security forces failed to push protesters away from Martyrs’ Square, the epicentre of the protest movement.
“People are very defiant. They say the more violence used against us, the more revolutionary we become. They are promising to stay in the streets and continue with their protests action until they see a change in leadership.”

Angry protesters told Al Jazeera that they would not back down and would continue to demand change.
“Unless things change, life [in Lebanon] is not worth living. We are in an economic crisis and they [politicians] have proven that they are a real failure. We have nothing,” a protester near Martyrs’ Square said.
“It’s been a hundred days [since protests began]. And still, who can get hold of their money in the banks? Who has electricity in their homes?” she asked rhetorically.
An AFP news agency photographer saw young men uproot parking metres. He also saw about 10 people faint from the tear gas.
President Michel Aoun ordered the army and security commanders to restore calm, while Saad Hariri, who resigned as prime minister in October, said the violence threatened civil peace. “It is an insane, suspicious and rejected scene,” he wrote on Twitter..
‘People are exasperated’
The protest movement rocking Lebanon since October 17 was revived this week, over delays in forming a new cabinet to address the country’s acute economic crisis.
No progress appears to have been made towards a final lineup, which protesters demand be comprised of independent experts and exclude all traditional political parties.

Commenting on the developments, Rami Khouri, a journalism professor at the American University of Beirut said that “people are exasperated by what they see as total disdain by their government.
“There have been three months of protest but there are very few statements from the government. It barely talks to the people and that is what angers them [the protesters].
“People are expressing extreme anger at leaders they see as in cahoots with each other, at the banking system and political elite working together.”
Forming a new cabinet is often convoluted in Lebanon, where a complex system seeks to maintain a balance between the country’s many political parties and religious confessions.
But protesters say they want to scrap the old system, and demand only impartial technocrats staff a new government to address their growing economic woes, including a severe liquidity crisis.
The last government stepped down under pressure from the street on October 29 but has remained in a caretaker capacity until a new cabinet takes shape.
The World Bank has warned that the poverty rate in Lebanon could rise from a third to a half if the political crisis is not remedied fast.