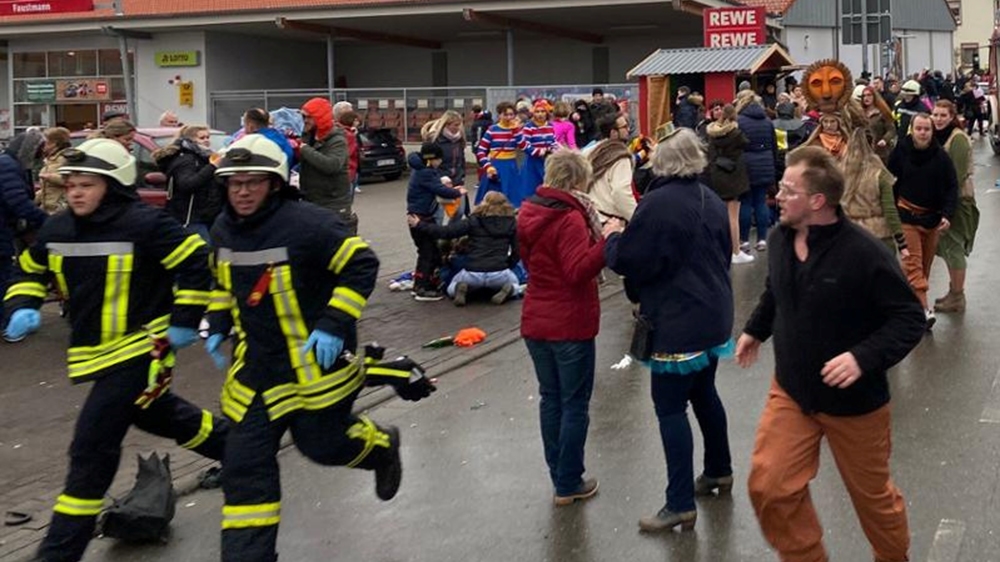 Police could not provide further details and urged people not to spread ‘unconfirmed reports’ about the incident [Elmar Schulten/Waldeckische Landeszeitung/Reuters]
A man intentionally rammed a car into a crowd at a carnival procession in the German town of Volkmarsen, injuring dozens of people including children, police said.
The suspect, a 29-year-old German citizen, was arrested but could not be immediately questioned because he was injured in the incident and being treated by doctors.
He is being investigated on suspicion of attempted homicide.
Police spokesman Henning Hinn confirmed that Monday’s crash was deliberate, adding: “There were several dozen injured, among them some seriously and sadly also children.”
He did not provide further details about the suspect’s possible motive.
Frankfurt police chief Gerhard Bereswill was quoted as saying by local media that 30 people were injured, seven of whom were in serious condition.
The incident took place on the south side of Volkmarsen, outside a supermarket.

Forensic police officers are seen close to the site where a car drove into a carnival procession in Volkmarsen near Kassel, central Germany, on Rose Monday, February 24, 2020 [Uwe Zucchi/dpa/AFP]

Video footage showed a silver Mercedes station wagon with local licence plates and its hazard lights blinking on the pavement while emergency crews walked by.
The carnival is popular in parts of Germany, especially in Rhineland cities such as Cologne and Duesseldorf, where festivities peaked on “Rose Monday” (February 24) with tens of thousands attending street parades featuring comical or satirical floats.
Volkmarsen, a town of about 7,000 people, is in Hesse, a central German state; all carnival parades across the state were cancelled as a precaution.
However, state police said they had no indication of a threat anywhere else in Germany.

BackPage 1 of 2Next →
In this article:injured, Several