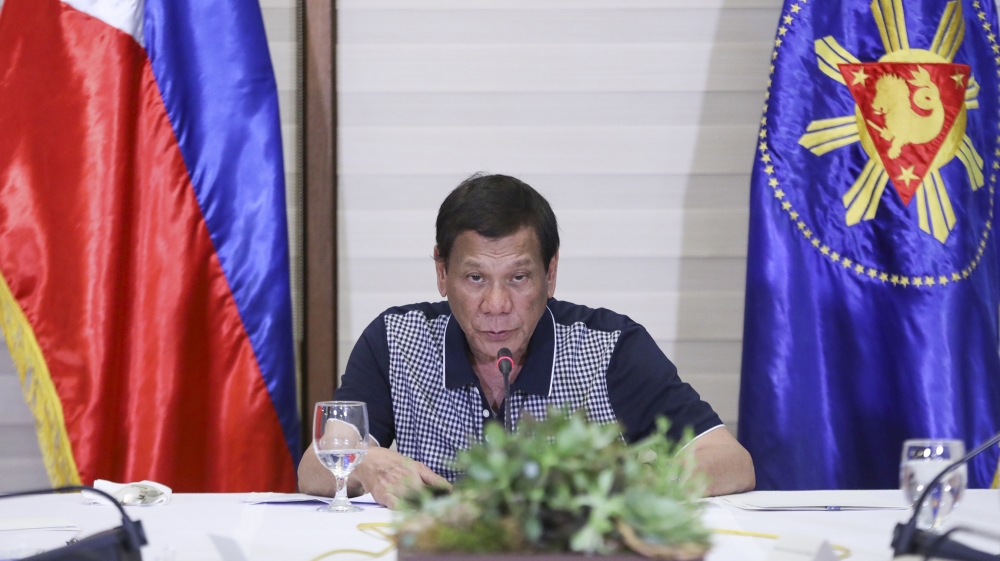 Philippine President Rodrigo Duterte has warned he would order the country’s police and military to shoot dead anyone “who creates trouble” during a month-long lockdown of the island of Luzon enforced to halt the spread of the coronavirus.
“Let this be a warning to all. Follow the government at this time because it is critical that we have order,” he said in a late-night televised national address on Wednesday.
More:

Philippines ‘ill-prepared’ as it grapples with coronavirus threat

“And do not harm the health workers, the doctors … because that is a serious crime. My orders to the police and the military, if anyone creates trouble, and their lives are in danger: shoot them dead.”
Duterte’s warning came after residents of a slum in Manila’s Quezon City staged a protest along a highway near their shanty houses, claiming they had not received any food packs and other relief supplies since the lockdown began more than two weeks ago.
Village security officers and police urged the residents to go back to their homes, but they refused, a police report said.
Police broke up the protest and arrested 20 people, the report added.
Health authorities in the Philippines have recorded 2,311 cases of COVID-19, the disease caused by the coronavirus. At least 96 people have died.
Jocy Lopez, 47, who led the group of residents, said they were forced to stage the protest because they did not have any food due to the lockdown.
“We are here to call for help because of hunger. We have not been given food, rice, groceries or cash. We have no work. Who do we turn to,” she said before being arrested.

Activist groups condemned the arrest and urged the government to fast track the release of cash assistance promised under a 200 billion peso ($4bn) social protection programme to help poor families and those who lost work amid the lockdown.
“Using excessive force and detention will not quell the empty stomachs of Filipinos who, up to this day, remain denied of the promised … cash aid for the poor,” said women’s rights group Gabriela.
Other residents later held a rally to demand the release of those arrested, holding posters that read “mass tests not mass arrests”.
The main northern Philippine region of Luzon is home to more than 50 million people and under a month-long lockdown.
Continue Reading…