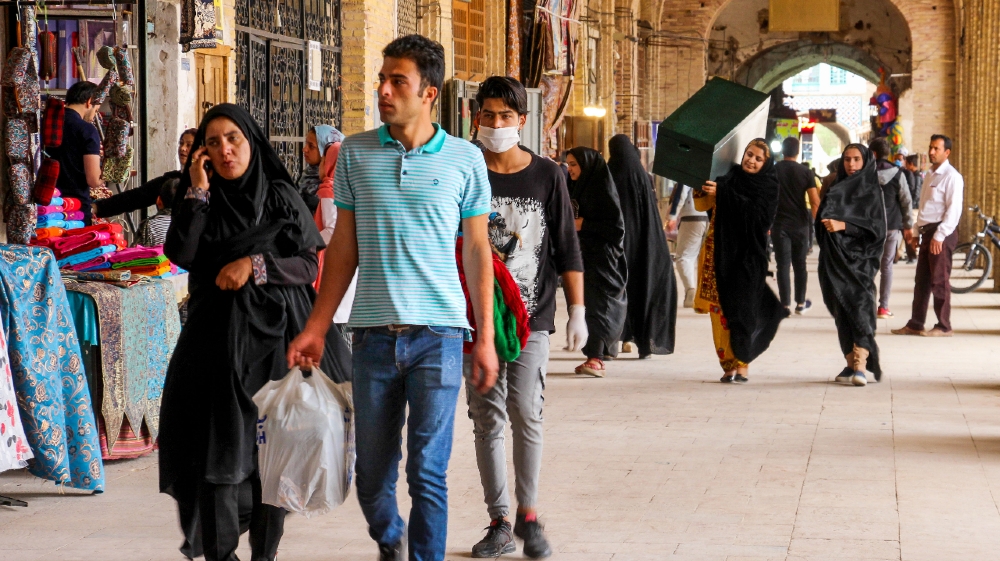 When Haniyeh* weighs the prospect of returning to work next week at a private company in the Iranian capital, Tehran, she takes some comfort from a colleague’s offer of a ride to the office.
“One of my colleagues said he will pick me up in the mornings so that I can avoid public transport,” she told Al Jazeera via telephone.
More:

Can the IMF overcome US roadblocks to give aid to Iran?

Iran vows to protect people from economic impact of coronavirus

“I’m really scared for having to go to work again, but I have no other choice.”
Haniyeh has diabetes and is considered among the groups of people most vulnerable to the novel coronavirus that has hit Iran hard.
Since the first case was confirmed in late February, Iran has reported about 79,500 infections and 4,958 deaths.
In an attempt to contain the virus, the government ordered stores and businesses across Iran to shut down on March 18, days before the two-week Nowruz holidays (Persian New Year).
The measures were eased this week, with the government allowing “low-risk businesses” across all provinces except Tehran to reopen on April 11.

The easing of the restrictions will be applied to the country’s largest city and commercial and industrial hub from April 18.
Haniyeh says she stopped going to work before the Persian new year, but with bills mounting, she has made the difficult decision to return to work when the restrictions are eased.
“I’ve stayed home for the past 45 days, but I’ve to go back to work starting next week despite all the risks to my health because I can’t pay my rent and bills without a salary,” Haniyeh said.
Her situation is similar to that of many others who have few options but to risk their health in order to make ends meet.
“I don’t know how much longer this situation will continue, but for people like us who can’t live without an income, it is really hard to choose between making money or trying to stay safe.”

Since the first case was confirmed in late February, Iran has reported about 79,500 infections and 4,958 deaths [AFP]

Tough economic conditions
Iran was already facing tough economic conditions when it was hit with the coronavirus outbreak in late February, as the effects of the relatively low oil price in recent years and the 2018 reimposition of United States sanctions hit the economy.
According to the World Bank, gross domestic product in Iran fell 8.7 percent in 2019 compared with the previous year.
Rather than impose a full nationwide lockdown that would have halted all non-essential economic activity, the government instead attempted to contain the virus via the partial closure around the new year holiday.
Ali Rabiei, an Iranian government spokesman, said on April 15 that “All taken decisions and policies over the past few weeks have been to protect the health and lives of the people, as well as to improve the economic and social life of the people.”
The government has approved some measures including 10 million-rial ($62) interest-free loans to help some low-income families.

Youths ride bikes in Tabriz, Iran after the reopening of government offices and some shops following a brief nationwide lockdown [Anadolu]

But for 25-year-old Ali Ahmadi, who works as a barista in the port city of Bandar Abbas, the capital of Hormozgan province in southern Iran, the relief package does not go far enough.
“With the high cost of living and inflation, this loan amount is ridiculous,” Ahmadi told Al Jazeera. “We have a rich country, why shouldn’t we receive proper support from the government?”
The coffee shop where he works has been closed for nearly a month as it falls under the “high-risk” business category under the government’s measures to combat the spread of COVID-19.
Ahmadi said that he received half his regular salary last month and that he would not receive any salary in April as the shop remains shuttered.
“These are very strange times we are all going through. With the limited savings that I had, I won’t be able to survive another month without an income. So if the government doesn’t allow restaurants and coffee shops to open soon, I will have to start looking for some other jobs.”
Ahmadi’s experience reflects that of many workers and small business owners across Iran who have lost part or all their income amid the coronavirus outbreak.

Economic Outlook
As the sanction-hit Iranian government tries to contain the pandemic while managing public health and a fragile economy, the International Monetary Fund (IMF) has forecasted a six percent drop in Iran’s gross domestic product in 2020.
The government last month requested a $5bn emergency loan from the IMF. Amid some reports that the US is trying to block Iran’s attempt to access the funds, the IMF announced on Wednesday that it was “still assessing” Iran’s request.

Iran’s Economy Minister, Farhad Dejpasand, was quoted last week by local media saying that estimates show 15 percent of Iran’s economy will be affected by the coronavirus outbreak.
Ehsan*, 23, owns a small sandwich shop in southwestern city of Ahvaz, and opened his business last year.
“We just reopened three days ago but I had to pay the store rent in full,” he told Al Jazeera. “We’re not having that many customers these days because people are scared to eat outside their homes.”
Meanwhile, despite some signs of a stabilisation of infection rates in recent days and with daily death tolls not exceeding two figures since April 14, officials and experts have warned about the possibility of a second wave of coronavirus cases as social and business activities resume across the country.
For his part, Ehsan remained pessimistic. Pointing to the business conditions over the past two months, he said: “Many businesses have been forced to close or reduce their workers. This will further increase unemployment. I wished I had enough savings to keep my shop closed until we get over the coronavirus.”
*Some surnames have been withheld for privacy reasons.
Continue Reading…

Can the IMF overcome US roadblocks to give aid to Iran?