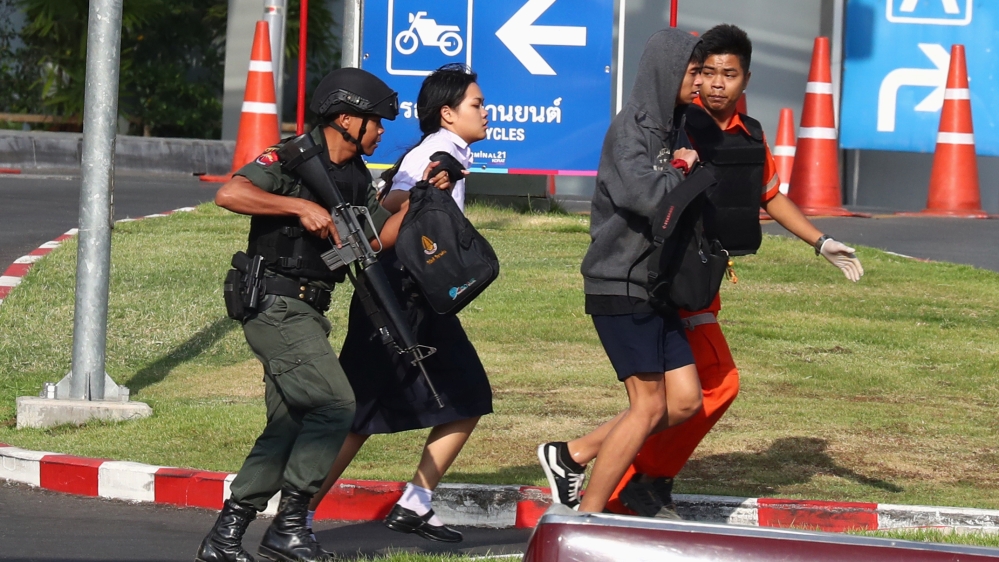 At least 29 people have been killed and 57 others wounded in an hours-long shooting spree in northeastern Thailand that ended in a shopping centre, where most of the victims were killed.
Officials said the attacker, a Thai soldier with a grudge, was fatally shot by security forces on Sunday morning after an overnight standoff at the complex in Nakhon Ratchasima city.
Here is what we know so far about the mass shooting:
What happened?
The attack began around 3pm (08:00 GMT) on Saturday, when the gunman, identified as Jakrapanth Thomma, opened fire in a house, before moving to an army camp and then to the shopping centre in Nakhon Ratchasima, about 250km (155 miles) from the capital, Bangkok.
Jakrapanth killed his commanding officer, Colonel Anantharot Krasae, then stole an assault weapon and ammunition from the army base’s arsenal.
The gunman then fled the base and went on a shooting spree, opening fire indiscriminately at the Terminal 21 shopping centre.

He posted written messages on Facebook during the attack before his account was shut down by the social media network.
In a video he posted on Facebook that was later published by media outlets, Jakrapanth said, “I’m tired. I’m too tired to move my finger any more,” as he gestured to his index finger while holding a gun.
In other posts he wrote messages such as “Should I surrender?” and “Three bodies were for revenge, the rest were self-defence”.
Hundreds of people were seen fleeing the mall in groups as the police and army launched rescues during the more than 12-hour standoff. The shooter remained in the mall overnight before he was shot by police on Sunday.
Volleys of gunfire rang out as the siege ran on till dawn, hours after Thai security services stormed the ground floor and freed tens of terrified shoppers.
Purported video from the scene – shared on social media – showed snipers on elevated walkways aiming their rifles downwards as heavy gunfire echoed across a concourse.
The province’s governor, Wichien Chantaranochai, on Sunday night said a total of 29 people had been killed by the attacker and 57 were wounded.
What did the survivors see?
Evacuees recounted how an ordinary Saturday at the busy shopping centre descended into horror as the gunman entered.
“It was like a dream … I’m grateful I survived,” Sottiyanee Unchalee, 48, told AFP news agency, explaining how she hid in the toilet of a gym inside the mall as she heard the gunfire.
Filipino teacher Aldrin Baliquing said he was ushered into a storeroom by staff as the shooting began.
“We were there for six gruelling hours … I’m in shock,” he said.

BackPage 1 of 2Next →
In this article:shooting, Thailand