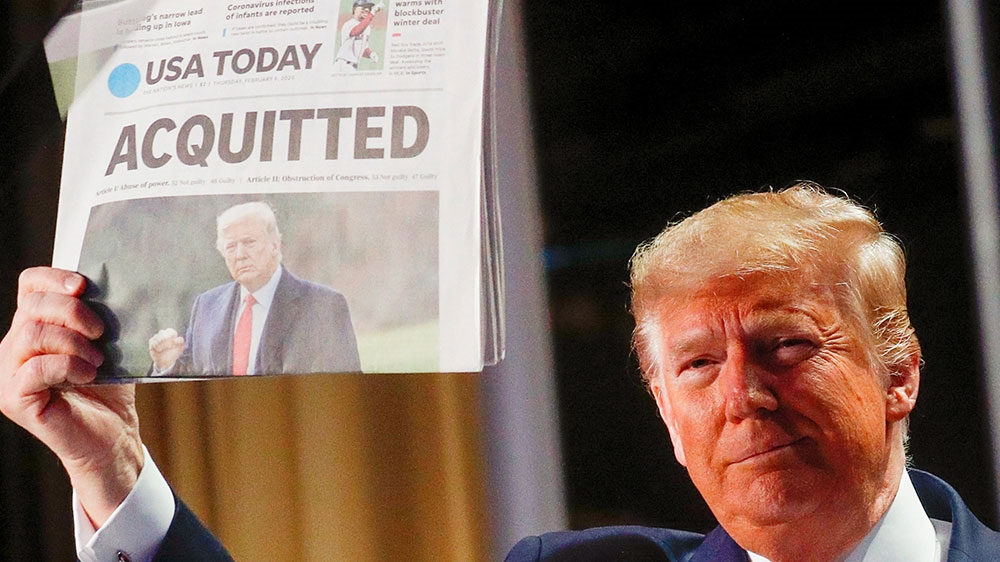 Washington, DC – The Republican-led United States Senate handed Donald Trump his biggest victory yet on Wednesday after it acquitted the president of abuse of power and obstruction of Congress.
“It’s a big win for President Trump,” said Jessica Levinson, a professor of law and director of the Public Policy Institute at Loyola Law School in Los Angeles.
“He’s going to say this was exoneration,” Levinson told Al Jazeera.
More:

That was indeed the word coming from the White House after the final votes on Wednesday.
“The shame impeachment attempt concocted by the Democrats ended in the full vindication and exoneration of President Donald J Trump,” White House Press Secretary Stephanie Grisham said in a statement.
Trump on Wednesday spoke from the White House, saying it was a “day of celebration”.
The president labelled the impeachment and Democrats as “evil and corrupt”.
“This should never ever happen to another president,” Trump said in televised remarks. “We went through hell, unfairly. We did nothing wrong.”
Wednesday votes fell largely along party lines, with only one Republican, Senator Mitt Romney, breaking ranks to vote with the Democrats on the first article: abuse of power. Even with his support, the vote fell well short of the two-thirds majority needed to convict and remove a president.
Republican senators viewed the case primarily as a partisan attack by Democrats on their president. Democrats meanwhile contend that Trump’s acquittal gives him a greenlight to do similar things in the future.
“If Trump gets re-elected, I don’t think there will be any constraints on what he does,” said John Jackson, a visiting politics professor at the Paul Simon Public Policy Institute at the University of Southern Illinois.

The president’s acquittal in the Senate is a measure of his political strength among Republican voters and the combination of admiration and fear with which he is regarded by Republican officeholders.
Trump took charge of his own defence early on. He denied House Democrats’ allegations, fought off investigators’ demands for information, and with the help of allies in Congress held Republicans together in turning the whole affair into a partisan exercise.
While the outcome gives Trump a political win, it does not resolve questions about his handling of aid to Ukraine and pursuit of foreign help in the upcoming 2020 US presidential election to be held in November.
And the way the trial was conducted also gives Democrats ammunition to try frame the acquittal as not a big victory for Trump, but a loss for the country, analysts say.
‘Cover-up’
Democrats will frame the trial as a “cover-up” and will use the Ukraine case to foster doubts among US voters about Trump’s corruption and dishonesty, said Keith Whittington, a politics professor at Princeton University.
“Democrats will continue to denounce not only the president for abusing power but also the Republican senators for limiting the scope of the trial,” Whittington told Al Jazeera.
Republicans in the Senate refused Democrats’ demands to call witnesses and maintained party discipline to reject strong arguments by the House that Trump abused his power and obstructed Congress.
At the core of Trump’s impeachment was a phone call in which the US president asked his Ukrainian counterpart Volodymyr Zelenskyy to announce investigations into former Vice President Joe Biden and his son Hunter Biden who served on the board of a Ukrainian gas company, Burisma.
There is no evidence the Bidens did anything wrong.

Ukraine’s President Volodymyr Zelenskyy speaks during a bilateral meeting with Trump on the sidelines of the 74th session of the United Nations General Assembly [File: Jonathan Ernst/Reuters]

Advertisement. Scroll to continue reading.
BackPage 1 of 2Next →
In this article:acquitted, Trump