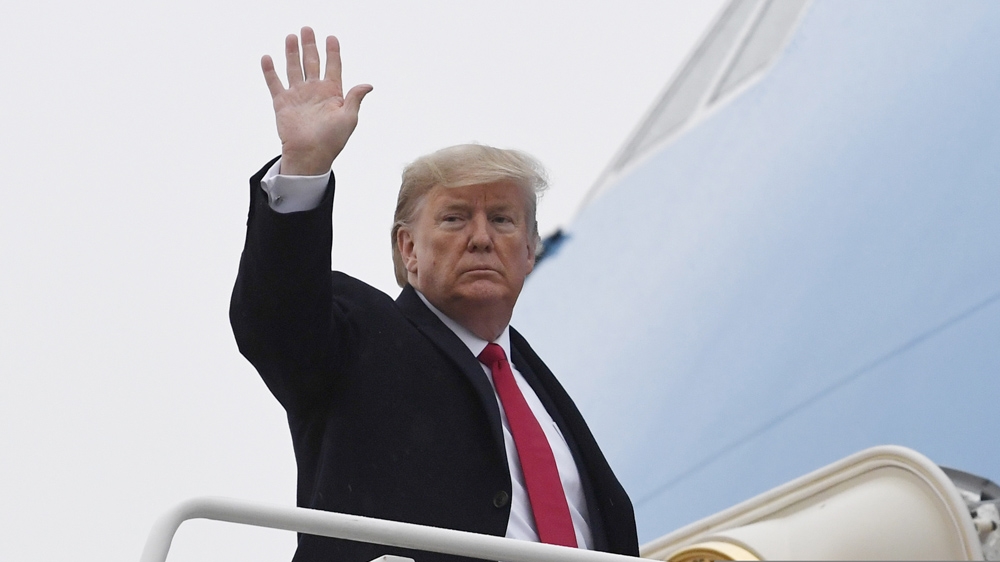 The United States Senate impeachment trial of President Donald Trump will conclude on Wednesday – its 13th day – with a final vote on whether to convict or acquit the president for abuse of power and obstruction of Congress.
A two-thirds vote of senators – 67 out of 100 – is required for conviction. With Republicans holding a 53-47 majority, Trump’s acquittal is all but certain.
On Monday, House of Representatives managers and Trump’s defence team presented their closing arguments, which were followed by a series of hearings in which senators, who had been gagged by strict rules during the trial, were given the chance to say how they planned to vote.
More:

Democratic House managers, who act as prosecutors, had faced an uphill battle from the trial’s start, with hopes of conviction largely hinging on the ability to introduce new evidence, including the possibility of subpoenaing witnesses and documents, into the proceedings. However, even recent revelations in an unpublished book by former National Security Advisor John Bolton proved not enough to tip the scale, with Friday’s 51-49 vote blocking new evidence and sounding a likely death knell for Democrats.
As Trump’s impeachment trial enters its final day, here are all the latest updates as of Wednesday, February 5:
Democrats praise Romney
Moments after Republican Senator Mitt Romney made the surprise announcement that he would break from party ranks and vote to convict the president on the abuse of power article of impeachment, Democrats took to Twitter in praise of the move.
“Thank you @MittRomney for rising to this moment, for choosing to vote your conscience, and for doing what you know in your heart to be right,” wrote Senator Kirsten Gillibrand.

Thank you @MittRomney for rising to this moment, for choosing to vote your conscience, and for doing what you know in your heart to be right.
— Kirsten Gillibrand (@SenGillibrand) February 5, 2020

“Senator Romney reminds us that it is not impossible to do the right thing, it’s just hard. That putting country over party isn’t just a slogan, it’s our solemn obligation. That individuals who have courage and conviction can change history, and have an obligation to try,” wrote Senator Brian Schatz.

Senator Romney reminds us that it is not impossible to do the right thing, it’s just hard. That putting country over party isn’t just a slogan, it’s our solemn obligation. That individuals who have courage and conviction can change history, and have an obligation to try.
— Brian Schatz (@brianschatz) February 5, 2020

“A powerful and principled statement on the Senate Floor today, @SenatorRomney. An example for all of us. Thank you,” wrote Senator Jeff Merkley.

A powerful and principled statement on the Senate Floor today, @SenatorRomney. An example for all of us. Thank you.
— Senator Jeff Merkley (@SenJeffMerkley) February 5, 2020

Senator Mitt Romney has said he will vote to convict the president on abuse of power. [File: Patrick Semansky/The Associated Press]

“I believe that attempting to corrupt an election to maintain power is about as egregious an assault on the Constitution as can be made,” Romney said. “And for that reason, it is a high crime and misdemeanor, and I have no choice under the oath that I took but to express that conclusion.”
He said he would not vote to convict the president on the obstruction of Congress article also passed by the House in December.
“I recognise there is going to be enormous consequences for having reached this conclusion,” Romney told the Times, adding the fallout would be “Unimaginable”.
Look back: What happened with the trial’s witness vote?
Democrats had pushed from the beginning of the Senate trial to pass a motion that would permit new evidence to be permitted in the proceedings, which would open the door to subpoena new witnesses and documents.
Democrats proposed an amendment that would allow new evidence on the second day of trial, which was blocked along with 11 others. The rules resolution passed by Republicans put off debate and a vote on evidence until after House managers, who served as prosecutors, and Trump’s defence team presented their cases.

Senator Mitt Romney was one of only two Republicans to vote in favour on introducing new evidence in the trial. [J. Scott Applewhite/The Associated Press]

In the following days, attention turned to several Republicans considered possible swing votes on the evidence motion. Four needed to break from the Republican ranks to give Democrats a simple majority. Reports of revelations in a draft book by former National Security Advisor John Bolton, which emerged during the trial, heightened the debate.
In the end, only two Republican Senators, Susan Collins and Mitt Romney, voted in favour of the new evidence. While closely watched Senators Lisa Murkowski and Lamar Alexander stuck with Republicans.
US House Democrats ‘likely’ to subpoena John Bolton: Nadler
Democrats in the US House of Representatives are likely to subpoena Donald Trump’s former National Security Advisor John Bolton and continue their investigation into the Republican president, the head of the House Judiciary panel said on Wednesday.
House Judiciary Committee Chairman Jerrold Nadler, speaking to CNN, said “I think it’s likely, yes” that their inquiries would continue and that a subpoena for Bolton was also “likely”.

Former National Security Advisor John Bolton had said he would testify if subpoenaed in the Senate trial [File: Peter Nicholls/Reuters]

Advertisement. Scroll to continue reading.
BackPage 1 of 2Next →
In this article:impeachment, Trump