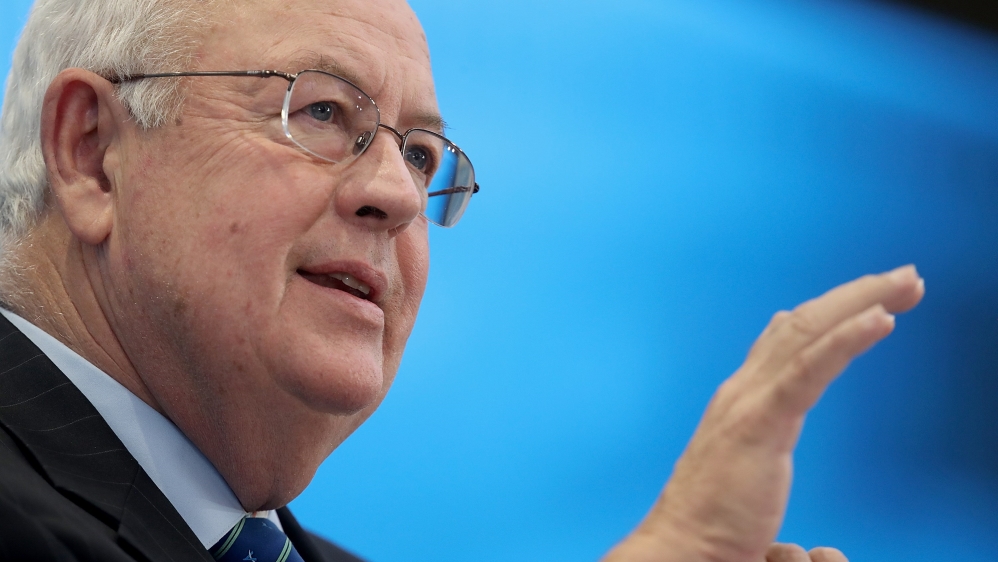 United States President Donald Trump has turned to some legal heavyweights to help defend him in his Senate impeachment trial, adding former independent counsel Kenneth Starr, who paved the way for former President Bill Clinton’s 1998 impeachment, and celebrity lawyer Alan Dershowitz to his legal team.
The additions, reported on Friday by US media, bring experience in the politics of impeachment as well as constitutional law to the team before opening arguments begin next week.
More:

Trump ‘knew exactly what was going on’ in Ukraine: Giuliani aide

The team defending the president will be led by White House counsel Pat Cipollone and Trump private attorney Jay Sekulow, who also represented the president during Special Counsel Robert Mueller’s Russia investigation.
Jane Raskin, one of Trump’s private lawyers, and Eric Herschmann, another former independent counsel, would be on the president’s legal team.
Trump adviser and former Florida attorney general Pam Bondi and former independent counsel Robert Ray will also be on the team, a source familiar with the team’s composition told Reuters news agency.
The trial in the Republican-led Senate formally got under way on Thursday, though it will start in earnest on Tuesday with opening statements. The trial will determine whether Trump is removed from office.

The Democratic-led House of Representatives voted on December 18 to impeach Trump on two charges arising from his dealings with Ukraine – abuse of power and obstruction of Congress – after an investigation that centred on his request that Ukraine investigate political rival Joe Biden, Trump’s possible Democratic opponent in the US presidential election in November.
Trump, a Republican, has denied wrongdoing and has called the impeachment process a sham.
The Senate is expected to acquit him, as none of its 53 Republicans has voiced support for removing him, a step that requires a two-thirds majority.
‘I think Starr’s a lunatic’
Starr is a former federal judge who held a senior Justice Department post under Republican President George H W  Bush. Starr’s voluminous investigative report on Clinton’s sexual affair with White House intern Monica Lewinsky served as the basis for his impeachment in the House on charges of perjury and obstruction of justice. The Senate in 1999 acquitted Clinton, a Democrat. Starr had recommended impeachment on 11 grounds.
In 2016, Starr was removed as president of Baylor University, a private Baptist institution in the state of Texas, after an investigation by an outside law firm determined that university leaders had mishandled accusations of sexual assault by football players. Critics of Starr at the time accused him of turning a blind eye to sexual violence on his campus after pursuing Clinton for a sexual relationship.
Both Starr and Dershowitz also served as lawyers for financier and convicted sex offender Jeffrey Epstein, who was found dead in his New York jail cell last year where he was being held on new sex trafficking charges.

In 1999, Trump made unflattering comments about Starr, saying in an interview on NBC’s Today show after Clinton’s acquittal: “I think Ken Starr’s a lunatic.”
In a 1999 interview with New York Times columnist Maureen Dowd, Trump said: “Starr’s a freak. I bet he’s got something in his closet.”
Dershowitz has been a well-known figure in US legal circles for decades. He was a longtime Harvard Law School professor and was part of the so-called “Dream Team” of lawyers who won a 1995 acquittal of former National Football League star and actor O J Simpson on charges of murdering his wife and a friend of hers. Dershowitz’s past clients also have included boxer Mike Tyson and televangelist Jim Bakker.
Both Starr and Dershowitz were defenders of Trump in media interviews during the impeachment process. Sources working with the Trump legal team reportedly said the president wanted Dershowitz because of his background as a constitutional scholar.
Continue Reading…

Simpsons actor Hank Azaria will not voice Apu after controversy

Patients infected by China virus ‘likely over a thousand’: study