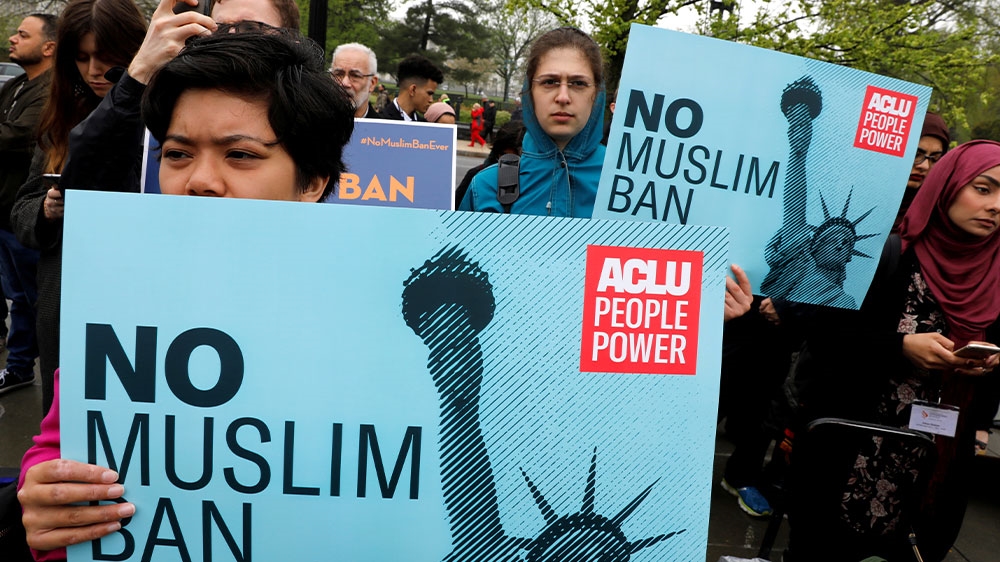 United States President Donald Trump issued an expanded version of his travel ban on Friday, a US official said, a move that was slammed by immigrant advocates and critics who say the policy discriminates against Muslims and others.
The US will suspend the issuance of visas that can lead to permanent residency for nationals of Eritrea, Kyrgyzstan, Myanmar and Nigeria, acting Secretary of Homeland Security Chad Wolf said during a call with reporters on Friday.
Nonimmigrant visas were not affected for the additional countries, Wolf said. Those visas are given to people travelling to the US for a temporary stay. They include visas for tourists, those doing business or people seeking medical treatment. During December, for example, about 650,760 nonimmigrant visas were granted worldwide.
More:

The US government will also stop issuing “diversity visas” to nationals of Sudan and Tanzania,
Those visas – which Trump has criticised in the past – are available by lottery for applicants from countries with low rates of immigration to the US.
Wolf said the six countries failed to meet US security and information-sharing standards, which necessitated the new restrictions. The problems Wolf cited ranged from subpar passport technology to a failure to sufficiently exchange information on “terrorism” suspects and criminals.
“These countries, for the most part, want to be helpful,” Wolf said, “but for a variety of different reasons simply failed to meet those minimum requirements that we laid out.”
The presidential proclamation will take effect February 21.
The original travel ban – issued during Trump’s first week in office in January 2017 – barred nearly all immigrants and travellers from seven Muslim-majority nations. It caused widespread outrage and chaos at airports across the US. The policy was revised amid court challenges, but the US Supreme Court ultimately upheld it in June 2018.
The existing version of the ban includes the Muslim-majority nations of Iran, Libya, Somalia, Syria and Yemen. North Korea and Venezuela also face visa restrictions, but those measures affect relatively few travellers.
Those restrictions will remain in place, Wolf said.
Disproportionately targets Muslims
Trump has made his immigration crackdown a focus of his 2020 re-election campaign and is expected to press the issue in the months ahead.
Critics contend the ban disproportionately targets Muslim-majority nations. In 2015, during Trump’s campaign for president, he called for “a total and complete shutdown of Muslims entering the United States”.
Three of the nations included in the updated ban – Kyrgyzstan, Nigeria and Sudan – have majority Muslim populations. Eritrea and Tanzania have sizable Muslim minorities.

Representative Ilhan Omar stands in front of ‘NO BAN ACT’ posters during a news conference by members of the US Congress [File: Jim Bourg/Reuters]

Earlier in January, a coalition of leading civil rights organisations urged House leaders to take up the No Ban Act, legislation to end Trump’s travel ban and prevent a new one.
On Thursday, Democratic Representative Ilhan Omar said she introduced legislation that would repeal a 1798 law that allows the US president to target groups of foreign nationals.
“It’s past time to take this xenophobic law off the books,” Omar tweeted, announcing the Neighbors Not Enemies Act.
The American Civil Liberties Union (ACLU) said the ban should be “ended, not expanded”.
“President Trump is doubling down on his signature anti-Muslim policy – and using the ban as a way to put even more of his prejudices into practice by excluding more communities of colour,” Omar Jadwat, director of the ACLU’s Immigrants’ Rights Project, said in a statement. “Families, universities, and businesses in the United States are paying an ever-higher price for President Trump’s ignorance and racism.”
Of the new countries hit with visa restrictions, Nigeria sends the most immigrants to the US. The US Department of State issued approximately 7,900 immigrant visas to Nigerians in the fiscal year 2018, which began October 1, 2017.
Congressman Joe Neguse, a Democrat from Colorado and son of Eritrean refugees, told reporters on Friday that the updated ban unfairly singled out allied African nations.
Continue Reading…