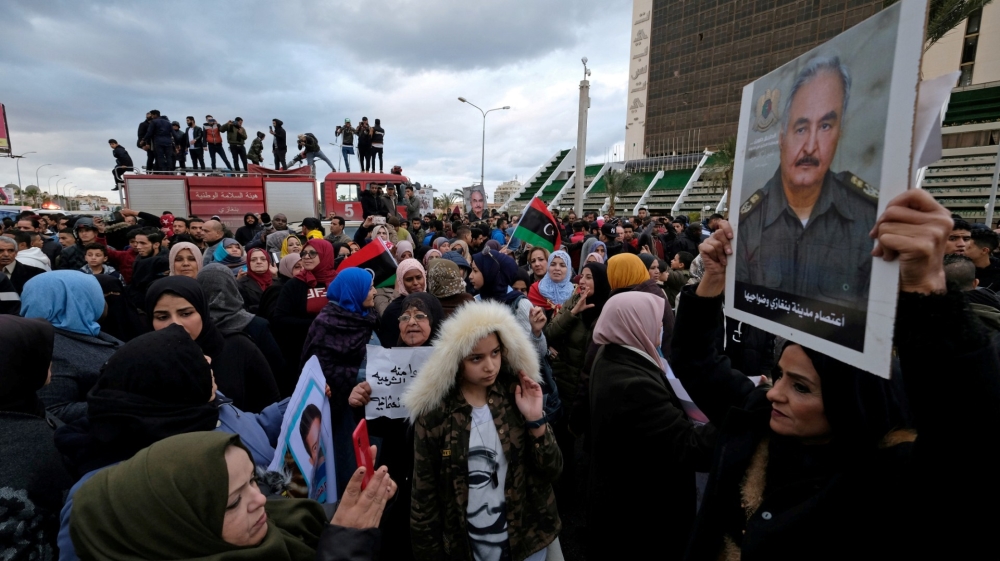 Turkey accused the United Arab Emirates of bringing chaos to the Middle East through its interventions in Libya and Yemen, the latest in a war of words between the two countries that is likely to inflame tensions.
Foreign Minister Mevlut Cavusoglu was responding on Tuesday to criticism of Turkey’s role in the Libyan conflict, shortly after the foreign ministry in Ankara dismissed a declaration by Cyprus, Egypt, France, Greece, and the UAE that described Turkish military activity in the eastern Mediterranean Sea and Libya as seeking “regional chaos and instability”.
More:

Libya’s war: Who is supporting whom

At the beginning of the year, Turkey deployed military personnel to Libya, and it has helped send Syrian fighters to support the internationally recognised government in Tripoli, while the five countries party to the declaration have supported the forces of commander Khalifa Haftar in the general’s attempt to capture the Libyan capital.
The joint missive on Tuesday also condemned Turkish gas-drilling off of the island-nation of Cyprus as “illegal”.
Cavusoglu told Turkish broadcaster Akit TV that the UAE, along with Egypt and other countries he did not name, were “trying to destabilise the whole region”. But he singled out Abu Dhabi for particular criticism.
“If you are asking who is destabilising this region, who is bringing chaos, then we would say Abu Dhabi without any hesitation,” he said. “It is a reality that they are the force that unsettled Libya and destroyed Yemen.”
The UAE did not immediately respond to Cavusoglu’s criticism.
Strained ties
Ties between Turkey and the UAE have been strained in recent years, particularly over Ankara’s support for Qatar after four Arab countries, including the UAE, imposed sanctions on Doha in 2017 over its independent foreign policy.
The UAE has presented itself as a bulwark against political forms of Islam, of which it views Turkish President Recep Tayyip Erdogan’s Justice and Development (AK) Party. The UAE has also condemned the party’s ties to the Muslim Brotherhood movement, which Abu Dhabi opposes.
In January, Turkey, along with other parties to the conflict attending a high-profile conference in Berlin, pledged to uphold the United Nations arms embargo on Libya and end military support for the country’s warring factions.
Last month, the UAE called on all parties to commit to the UN-supervised political process to end the war in Libya, where the UN says Abu Dhabi has supplied aircraft and military vehicles to Haftar.

On Tuesday, European Union foreign policy chief Josep Borrell issued a statement calling for Libya’s warring factions to lay down their arms and urging “all parties having committed to a truce and a negotiated ceasefire to follow up on these commitments”.
Support for al-Shabab
Cavusoglu, in his comments, also accused the UAE of supporting al-Shabab fighters in Somalia, where Turkey has a military base and is training Somali troops.
The UAE trained hundreds of Somali troo­­ps from 2014 onward as part of an effort by an African Union military mission to defeat the armed uprising in the country, until Somalia disbanded the programme in 2018. Abu Dhabi was also a leading power in an alliance that intervened in Yemen five years ago against the Iran-aligned Houthi rebels. It reduced its presence in Yemen last year but remains a member of that coalition.
Continue Reading…

Cyprus has accused Turkey of extending “illegal drilling” in disputed Mediterranean waters but said it is ready to engage in dialogue with Ankara to resolve differences over exploration rights. On Tuesday, Turkey extended the operations of its Yavuz energy drill ship in the disputed area off Cyprus until October 12, in a move that could stir tension… 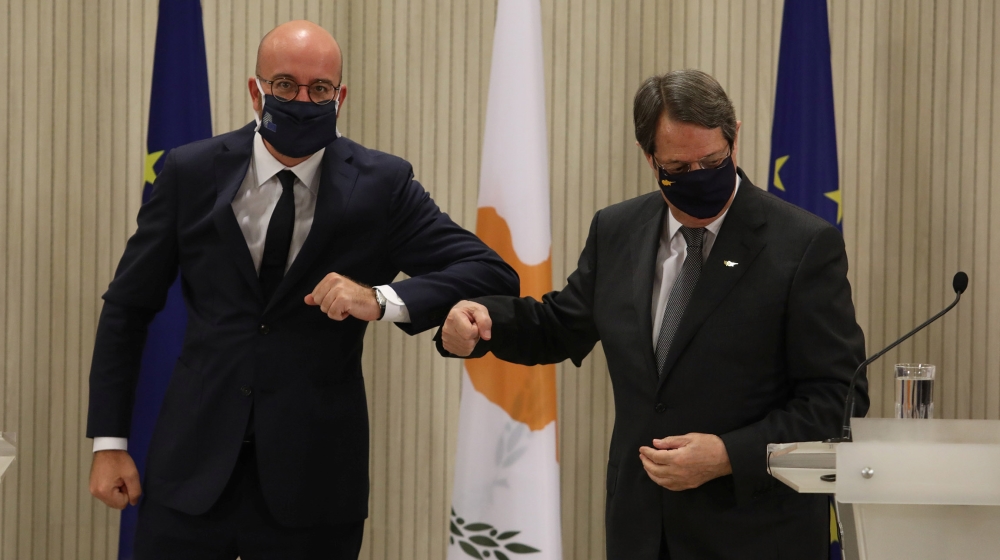 Cyprus has accused Turkey of extending “illegal drilling” in disputed Mediterranean waters but said it is ready to engage in dialogue with Ankara to resolve differences over exploration rights.
On Tuesday, Turkey extended the operations of its Yavuz energy drill ship in the disputed area off Cyprus until October 12, in a move that could stir tension between the island’s Greek Cypriot government and Ankara.
“Yesterday, unfortunately a Turkish NAVTEX to expand illegal drilling by the Yavuz vessel was extended when at the same time, a series of initiatives are ongoing that seek an end to Ankara’s unlawful actions and de-escalation,” President Nicos Anastasiades said on Wednesday, after a meeting with European Council President Charles Michel in Nicosia.
Yavuz will be accompanied by three other Turkish ships, according to a Turkish maritime notice that added “all vessels are strongly advised not to enter” the area, Turkish broadcaster TRT reported.
Anastasiades’s comments come a week ahead of a special summit of European Union leaders on September 24-25 to discuss how to resolve the crisis between Cyprus and Turkey.
Anastasiades said Turkey was continuing its provocations in the Eastern Mediterranean, adding Cyprus would enter dialogue – but not under threats.
Meanwhile, the European Commission’s president on Wednesday warned Turkey against trying to intimidate Greece and Cyprus.
In her annual State of the EU speech, Ursula von der Leyen said Ankara was a key partner doing important work hosting refugees but stressed “none of this is justification for attempts to intimidate its neighbours”.
Turkey, Greece and Cyprus have been locked in a dispute over energy resources and maritime borders in the region, with Ankara infuriating the EU countries by sending research ships with naval escorts to work in contested waters.
There have been fears of conflict erupting and Cyprus is pressing the rest of the EU to impose fresh sanctions on Ankara over the drilling, a move Turkey has decried as lacking legal basis.
“Turkey is and will always be an important neighbour, but while we are close together on the map, the distance between us appears to be growing,” Von der Leyen told the European Parliament.
“Yes, Turkey is in a troubled neighbourhood. And yes, it is hosting millions of refugees, for which we support them with considerable funding. But none of this is justification for attempts to intimidate its neighbours.”
Greece and Cyprus can count on Europe’s “full solidarity on protecting their legitimate sovereignty rights”, she added.
Greek Prime Minister Kyriakos Mitsotakis has called for European “solidarity” on the issue and a renewed migrant crisis.
Mevlut Cavusoglu, Turkey’s foreign minister,  said his country has been proposing to restart exploratory talks with Greece.
“Exploratory talks actually cover all disputed issues between Turkey and Greece … The previous government [in Greece] … didn’t want to actually restart. And this government also has not been willing to restart the exploratory talks, so we have to make an agreement,” he said.
Continue Reading…

Matt Gaetz accuses Liz Cheney of working against Donald Trump, calls for her to step down

Rep. Matt Gaetz of Florida on Tuesday accused House GOP Conference Chair Liz Cheney of trying to undermine President Trump and called for her to step down from GOP leadership. Liz Cheney has worked behind the scenes (and now in public) against @realDonaldTrump and his agenda.House Republicans deserve better as our Conference Chair. Liz Cheney… 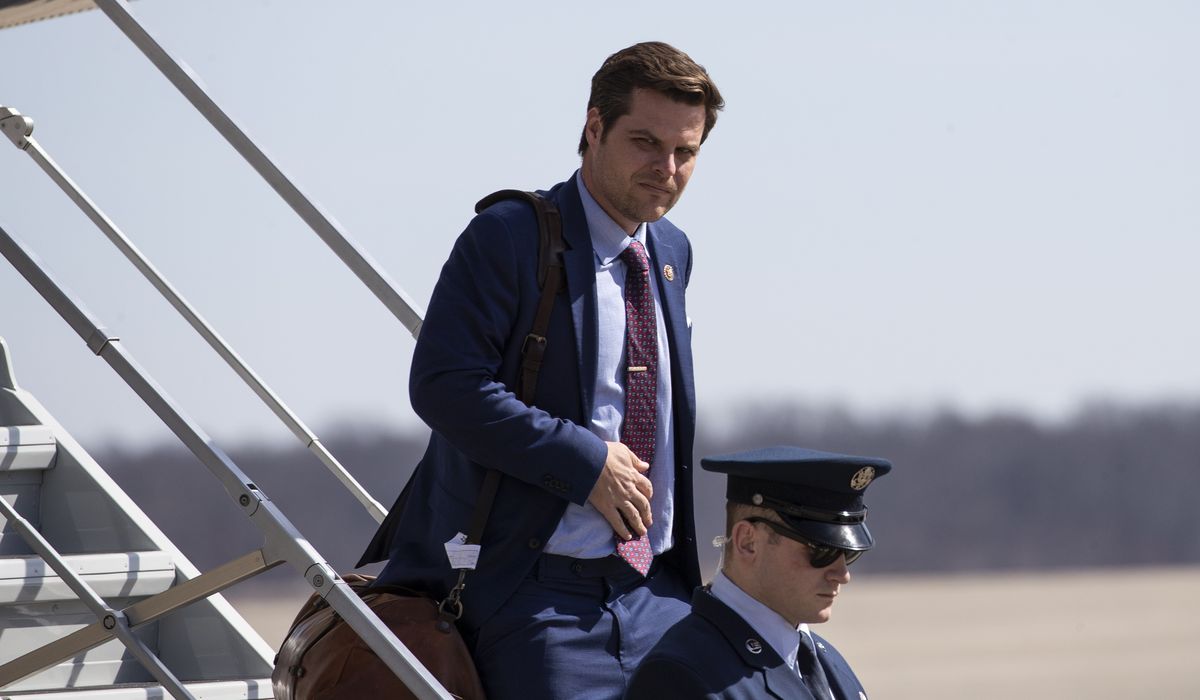 Rep. Matt Gaetz of Florida on Tuesday accused House GOP Conference Chair Liz Cheney of trying to undermine President Trump and called for her to step down from GOP leadership.

Liz Cheney has worked behind the scenes (and now in public) against @realDonaldTrump and his agenda.House Republicans deserve better as our Conference Chair. Liz Cheney should step down or be removed. #MAGA
— Matt Gaetz (@mattgaetz) July 21, 2020

Ms. Cheney, Wyoming Republican, has had several public breaks with Mr. Trump over her tenure as the third highest-ranking House Republican.

During the course of the coronavirus pandemic, she’s countered his messaging on masks and lockdown policies in the country and increasingly questioned his foreign policy decisions, particularly regarding reports of Russian bounties on U.S. soldiers.

But she’s also been in the president’s corner on issues such as impeachment, and votes in line with his agenda nearly 97% of the time, according to FiveThirtyEight.

We already have one Mitt Romney, we don’t need another… we also don’t need the endless wars she advocates for. https://t.co/RDkJDA9UOZ
— Donald Trump Jr. (@DonaldJTrumpJr) July 21, 2020

Libya’s NOC accuses UAE of being behind oil blockade |NationalTribune.com

Since January, groups loyal to Haftar have been blocking the production and export of oil from the country’s most important fields and terminals [Esam Omran Al-Fetori/Reuters] Libya’s National Oil Corp (NOC) has accused the United Arab Emirates of instructing eastern forces in Libya’s civil war to reimpose a blockade of oil exports after the departure… 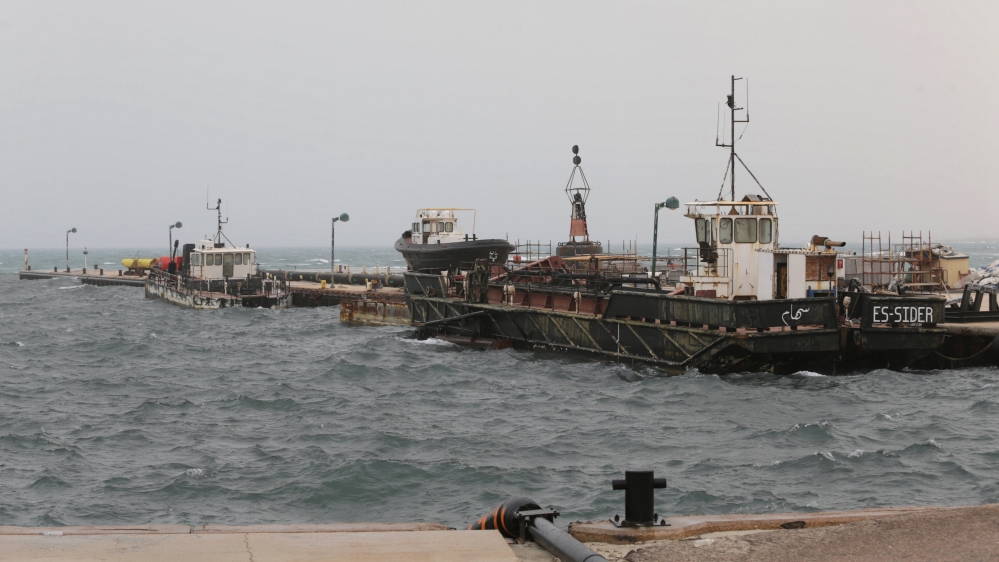 Since January, groups loyal to Haftar have been blocking the production and export of oil from the country’s most important fields and terminals [Esam Omran Al-Fetori/Reuters]
Libya’s National Oil Corp (NOC) has accused the United Arab Emirates of instructing eastern forces in Libya’s civil war to reimpose a blockade of oil exports after the departure of the first tanker in six months.
The UAE, along with Russia and Egypt, supports the eastern-based self-styled Libyan National Army (LNA) of renegade military commander Khalifa Haftar, which on Saturday said the blockade would continue despite it having let a tanker loaded with oil from storage.
Libya, which sits atop Africa’s largest proven crude oil reserves, is torn between the rival powers of the UN-recognised Government of National Accord (GNA) in Tripoli and eastern-based Haftar.
“NOC has been informed that the instructions to shut down production were given to (the LNA) by the United Arab Emirates,” it said in a statement on Sunday, resuming force majeure on all oil exports.
There was no immediate comment on NOC’s accusation from either the LNA or the UAE.
Haftar has been on the back foot after Turkish support helped the GNA turn back his 14-month assault on the capital, Tripoli.

After the GNA gained ground, NOC also tried to restart production at the Sharara oil field, but said this effort was quickly shut down and accused Russian mercenaries fighting alongside the LNA of deploying there.
On Friday the Vitol tanker Kriti Bastion docked and loaded at Es Sider port before sailing on Saturday, the first legal export of Libyan oil since the blockade was imposed in January.
The NOC said Russian and Syrian mercenaries fighting alongside the LNA now occupied Es Sider.
Under international agreements, only NOC can produce and export oil and revenues must flow into the Central Bank of Libya. Both those institutions are based in Tripoli, the seat of the GNA.
The LNA said on Saturday it would continue the blockade until a list of conditions were met, including channelling oil revenue into a new bank account based outside the country to then be distributed regionally.
On Sunday the United States’s Libya embassy said the resumption of the blockade came after “days of intense diplomatic activity” to let NOC resume output, and said it “regrets that foreign-backed efforts” had impeded this.