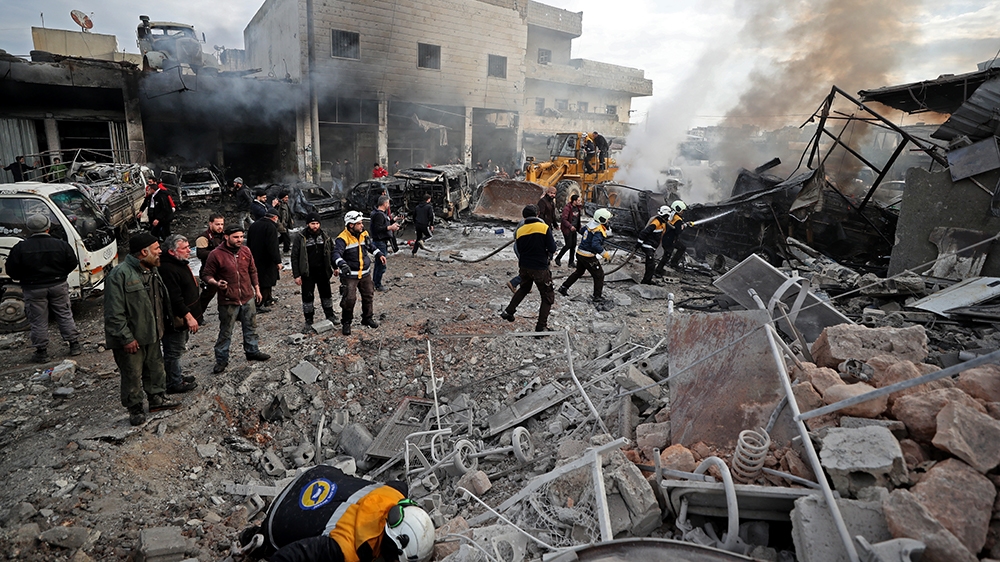 Turkey has deployed additional armed vehicles and soldiers to its border with Syria as an intensifying military push by Syrian government forces in the country’s last major rebel-held stronghold has prompted fears of a new refugee crisis.
Backed by Russian jets, the Syrian troops have recently made large advances in Idlib province during the deadly offensive that has forced hundreds of thousands of people to flee towards safer areas near the Turkish border, according to the United Nations.
More:

The Syrian government’s campaign has shattered a fragile ceasefire that was brokered last month by Turkey and Russia, raising tensions between the two countries which back opposing sides in the conflict but have also coopoerated in attempts to find a solution to the almost nine-year-old war.
Turkish state media reported on Sunday that the deployment of tanks and other armoured vehicles to Reyhanli district of Hatay province was completed earlier in the day.
“Turkey would do what is necessary diplomatically or militarily in order to prevent a humanitarian catastrophe in Idlib and keep the region stable,” Ahmet Berat Conkar, a member of the Turkish parliament’s foreign affairs committee, told Al Jazeera.
“Ankara would not hesitate to intervene if the Syrian government offensive turns into a catastrophe,” Conkar said.

“We need to protect our border against any kind of threat, particularly terrorism, and control it in case of a refugee flow against the backdrop of the attacks going on in Idlib.”
The UN said on Wednesday that almost 390,000 people – the vast majority of them women and children – had fled their homes in northwestern Syria since December 1.
Turkey hosts more than 3.5 million Syrian refugees and is wary of a fresh influx.
‘Civilians should be protected’
Idlib is home to approximately three million people, half of whom were transferred there en masse from other parts of Syria that were taken by government forces.
Damascus and Moscow maintain the military operation in Idlib is aimed at driving out “terrorists” from the region, in accordance with a 2018 de-escalation agreement reached between Russia, Iran and Turkey.
The Hay’et Tahrir al-Sham armed group, a former al-Qaeda affiliate that is considered by Russia and Turkey a “terrorist” organisation, controls a large portion of Idlib.
Conkar, who is also a senior legislator in the governing AK Party, said Ankara was not opposed to operations against “terrorists” but stressed that civilians should not be harmed.
“Turkey’s understanding of fighting against terrorism requires protecting civilians. However, this is not what is going on in the Syrian regime’s offensive backed by Russia in Idlib. This is the main point of conflict,” he said.
“I believe Turkey and Russia should act in collaboration against terror elements in Idlib and work closer to distinguish civilians from terrorists in the region,” Conkar added.
“The cooperation and trust between the two countries do not seem to be at that level yet, but hopefully it will be in the future.”
6,500 children fleeing daily
Meanwhile, UNICEF, the UN’s children agency, said on Saturday that violence over the past week had forced 6,500 children to flee daily, bringing the total number of displaced minors in the area to more than 300,000 since early December.

The agency said an estimated 1.2 million children “are in desperate need” amid short supplies of food, water and medicine.
“Children and families are taking refuge in public facilities, schools, mosques, unfinished buildings and shops. Many are simply living in the open air including in parks, amidst heavy rains and in the freezing cold. Access to the most basic services like health, water or sanitation is either very limited or non-existent,” UNICEF Executive Director Henrietta Fore said in a statement.
“In Idlib, where more than three-quarters of the population in need are women and children, many families have suffered multiple displacements and are increasingly desperate – with no way to safely escape the violence.”
Turkish President Recep Tayyip Erdogan recently warned that Ankara may launch a cross-border military operation in Idlib unless fighting there was quickly halted.
Ankara has 12 military observation posts around Idlib, set up in line with the 2018 deal for de-escalation zones in the region, but several of them have since been surrounded or have come under fire by advancing Syrian government forces.
Moscow and Ankara also cooperated late last year in establishing the borders of a so-called safe-zone in a separate region in northeatern Syria following an operation against Kurdish fighters dubbed “terrorists” by Turkey.
Continue Reading…

US envoy briefs Afghan president on peace talks with Taliban