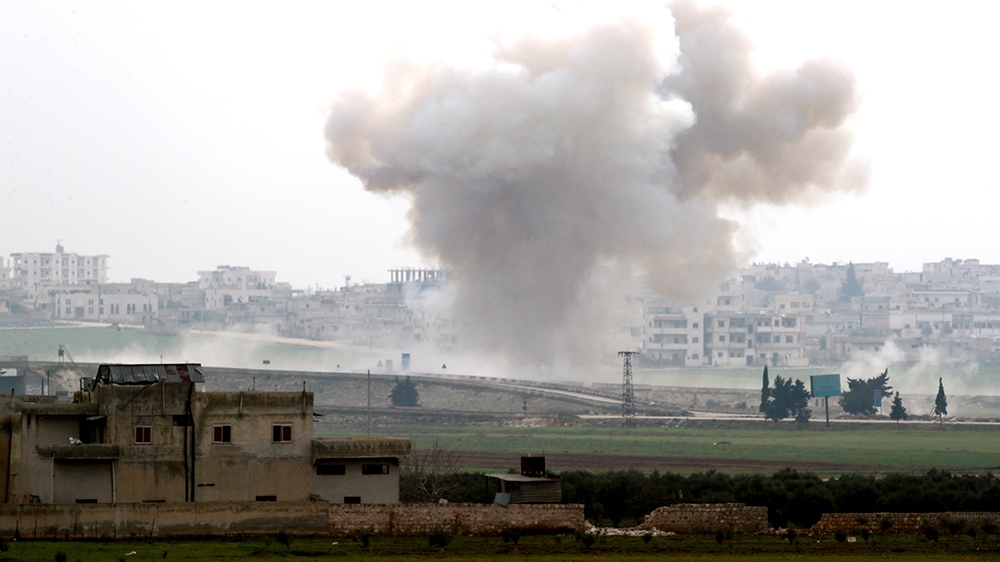 Antakya, Turkey – Turkey’s military shot down two Syrian government fighter jets over northwest Idlib, hours after forces loyal to Syrian President Bashar al-Assad brought down a Turkish drone over the region.
In a Twitter post on Sunday, Turkey’s defence ministry said its forces struck two SU-24 aircraft in response to the downing of the drone.
More:

Idlib: ‘A crisis on a monumental scale’

Syria: Why is the world indifferent to Idlib?

Syria’s SANA news agency confirmed the aircraft were hit over northwestern Idlib province, but said no one was hurt in the attack. The pilots used parachutes and landed safely, it added.
The shootdowns came as Turkey announced a full-scale military operation dubbed “Spring Shield” against Syrian targets.
The Syrian military’s Al-Nayrab airport, on the outskirts of Aleppo city, was hit by air attacks “making it out of service”, Turkey’s state-run Anadolu news agency cited “local sources” as saying.
Syrian forces used the airbase for “attacks against the Turkish armed forces and civilians in Idlib”, the news report said.
“The regime’s range of action has been further restricted as the Al-Nayrab military airport has been made unusable,” sources were quoted as saying.
Al Jazeera was unable to independently confirm the report.

Amid the escalating tensions, the Syrian government closed the airspace over Idlib, with one official telling SANA any aircraft “that violates our airspace will be treated as a hostile flight that must be shot down and prevented from achieving its objectives”.
Forces loyal to al-Assad, backed by Russian airpower, have renewed an offensive to capture Idlib from opposition forces, who are backed by Turkey.
Since the operation intensified in December, Syrian government forces have rapidly advanced into the last opposition stronghold, retaking the strategic M5 highway and solidifying control over parts of Aleppo province, which borders Idlib.
Turkey says the operation violates deals signed with Russia in 2017 and 2018 to set up de-escalation zones in the region.
Tensions have escalated in recent days after 34 Turkish troops were killed in Syrian government air raids on Idlib on February 27. The toll was the biggest military loss the Turkish military has suffered since it intervened in the Syrian conflict in 2016.
In response, Ankara said it struck scores of Syrian government targets and “neutralised” 2,212 soldiers.

Speaking in Hatay on Sunday, Turkish Defence Minister Hulusi Akar said Ankara’s response also destroyed eight Syrian helicopters, 103 tanks, 72 artillery and rocket launchers, and three air defence systems.
“Following the heinous attack on February 27 in Idlib, operation Spring Shield successfully continues,” Akar said in a video shared by the defence ministry.
Damascus is yet to comment on the Turkish claims.
“We have no intention of clashing with Russia. Our aim is to stop massacres Syrian regime’s massacres, radicalisation and migration,” Akar was quoted as saying by Turkish media.
He went on to pledge retaliation against attacks on Turkish forces and its observation posts in Idlib and said: “Turkey will only target Syrian regime soldiers and elements in Idlib who attacked Turkish troops … Turkey expects Russia to use its influence to end to Syrian regime attacks.”
There was no immediate comment from Russia.
‘Horror story’
The renewed hostilities in Idlib has displaced nearly one million people, mostly women and children, according to the United Nations. About 300 civilians have also been confirmed killed.
Syrian civil defence rescuers told Al Jazeera that four civilians were killed, including a child, in an air attack on Sunday by government forces near the town of Maaret Masreen in Idlib.
Mark Lowcock, head of UN’s humanitarian agency, has described the situation as the “biggest humanitarian horror story of the 21st century” and called for an immediate ceasefire.
At a pro-Turkish demonstration in Idlib’s Hazzaneh town, Hussein al-Hamad said Ankara intervened in Idlib “based on the request of the free Syrian people”.
“We are in full support of the Turkey’s armed forces’ operation in Idlib and God willing we will liberate all the towns in the province,” al-Hamad told Al Jazeera.
“Turkey’s strong intervention confirms the continuation of battles to wrest control of the fallen areas from the Syrian regime forces and its Russian allies and Iranian militias.”
Idlib resident Othman Abu Fadi also reacted positively to Turkey’s military operation.
“We are all hopeful that something positive will happen to relieve the Syrian people of their suffering … We need an ally like Turkey to actively push back the Syrian government force,” Fadi told Al Jazeera.
“The morale was low when we learned of the regime’s advancement into Idlib, but with the rebels taking back control of Saraqeb, our faith in the opposition groups has resurged, especially with their positions in Jabal Zawiya and Sahl-al-Ghab. We hope in another month’s time Idlib will be under full control of the rebels.”

Reyhanli, Turkey – Turkish forces downed a fighter jet flown by Syrian government forces over southern Idlib on Tuesday as a strategic town in northwest Syria fell under the control of President Bashar al-Assad’s military. It was the third such shoot-down in three days after Turkey hit two other Syrian aircraft on Sunday. “Turkish regime forces… 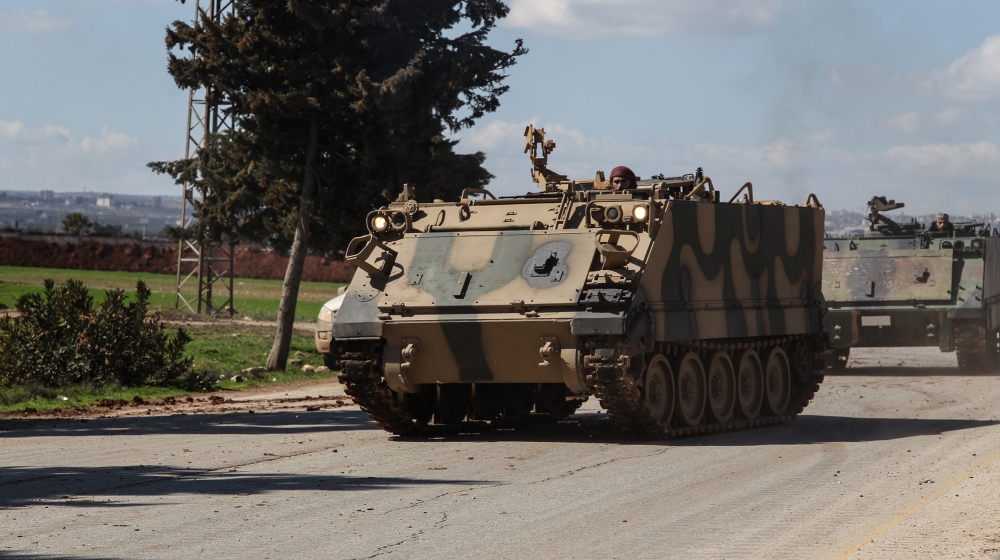 Reyhanli, Turkey – Turkish forces downed a fighter jet flown by Syrian government forces over southern Idlib on Tuesday as a strategic town in northwest Syria fell under the control of President Bashar al-Assad’s military.
It was the third such shoot-down in three days after Turkey hit two other Syrian aircraft on Sunday.
“Turkish regime forces targeted one of our warplanes, which led to its fall in the northwest area of Maarat al-Numan,” Syrian state media reported.
More:

On Twitter, the Turkish defence ministry confirmed the news, saying “an L-39 plane belonging to the [Syrian] regime has been downed”.

Meanwhile, Syrian government forces overnight took over the key city of Saraqeb, which lies at the junction of the M4 and M5 commercial highways that connect the country’s major cities.
Saraqeb has changed hands twice in the last month, but a dramatic escalation in fighting over the past few days saw armed opposition groups retreat to the villages of Nairab and Afis in the west, as Syrian government forces – under cover of Russian air power – secured the city.
Rashwan Abu Hamza, a field commander in Saraqeb belonging to one of the rebel groups, told Al Jazeera the battle against al-Assad’s forces intensified on Monday night.
“Regime forces began to advance into the city at 2am and an hour later entered the neighbourhoods and began combing them,” Abu Hamza said. “The shelling from Russian warplanes escalated and forced us to withdraw west of the city.”
At 4am (01:00 GMT) on Tuesday, Saraqeb was under the full control of the Syrian forces, he said, but added a counteroffensive was imminent.
‘Operation Spring Shield’
Since December, al-Assad’s forces intensified their offensive to take control of Idlib province, the last rebel stronghold in Syria where Turkey backs some opposition fighters.
The operation has resulted in the internal displacement of nearly one million Syrians, the majority fleeing to the Turkish border, and killed at least 300 civilians.
Under the 2018 Sochi agreement with Russia, which designated Idlib as a de-escalation zone, Turkey set up several observation points throughout the province, but incurred heavy losses as Syrian forces targeted its troops.

Turkey launched a military operation it called Spring Shield, its fourth and biggest intervention yet into Syria’s nine-year civil war. It came in response to the killing of 34 Turkish soldiers in Idlib last week, the deadliest strike against the Turkish army in decades.
Turkey’s defence ministry said so far more than 2,500 Syrian soldiers have been “neutralised” – a term that means wounded, captured or killed.
One Turkish soldier was killed during fighting on Tuesday, Defence Minister Hulusi Akar was quoted by broadcaster NTV as saying.
The head of Turkey’s far-right Nationalist Movement Party (MHP), Devlet Bahceli, said in Ankara on Tuesday the threat from across the border demanded military action.
“Turkey is not joking. The Idlib issue is directly related to the survival and protection of a homeland. Russia and Syria should not try Turkey’s patience any more,” said Bahceli.
Return to Idlib
At the Reyhanli-Cilvegozu border crossing on the Turkish side, Ahmad Abeed stood near the gate smoking a cigarette.
The 22-year-old, who works in a hazelnut factory in Antakya, has been in Turkey for the past five years, but is now longing to return to Syria where his parents and siblings are.
“My family are from a village in Saraqeb’s countryside,” he said. “Two weeks ago they were displaced to Sarmada.”
Abeed wants to enter Idlib to fight against the Syrian government forces.
“When I first came to Turkey, I thought the war in Syria would end after a year or two,” he said. “I didn’t support any side. But now the enemy is clear. I can’t leave my younger sisters inside to die, so that’s why I want to pick up arms.”
A few metres next to him, Umm Asad stood facing the border crossing, her eyes full of tears.
“I’ve been trying to go back to Idlib for a while now,” she told Al Jazeera, holding her one-year-old daughter Shams.
“I want to be with my children who are frightened out of their wits by the shelling. They need their mother,” Umm Asad said.
Her husband and two other children are in the town of Binnish, some 6km (3.7 miles) from Saraqeb. Heavily pregnant at the time, Umm Asad left her family a year ago to accompany her six-year-old son to a hospital in Turkey’s Hatay for a medical emergency.
Her son is now in a permanent comatose state, and she longs to return to Idlib.
“I don’t have a house in Hatay,” she said. “I gave birth to Shams here and rely on the kindness of my relatives here. But my children need me,” she said.