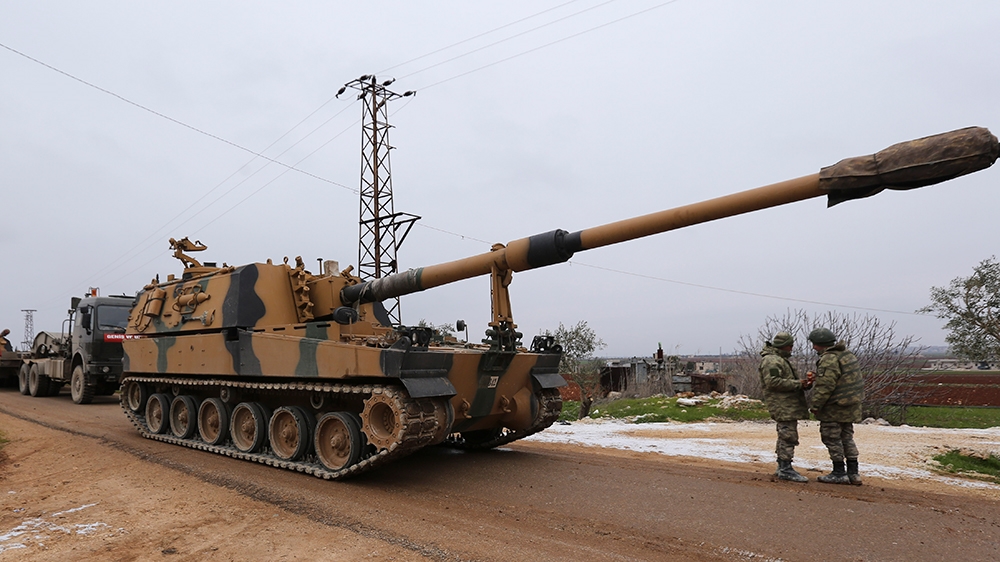 Two Turkish soldiers have been killed and two others wounded in an air strike in Syria’s northwestern province of Idlib as Turkey-backed Syrian rebels regained a key town during heavy fighting.
Hours after the seizure of Saraqeb, Syrian government forces launched a major counterattack.
The retaking of Saraqeb that sits on the highway is a setback for Syrian President Bashar al-Assad’s forces who have scored major gains in a weeks-long Russian-backed campaign in the last rebel stronghold in Idlib province.
The latest casualties brought the number of Turkish security personnel killed during the Russian-backed Syrian government offensive in Idlib this month to 19. Over the past weeks, Turkey sent thousands of troops into the province.
More:

Turkey-backed Syrian rebels said on Thursday they recaptured the strategic town – the first significant reverse for the Syrian army operation that has made swift gains.
From inside Saraqeb, activist Taher al-Omar said the town was now under opposition control. He posted a video with a fighter saying the government forces “ran away like rats”.
Three weeks ago, opposition fighters lost the key northwestern town at the junction of two main highways following rapid advances by Syrian forces in their bid to retake Idlib.
“The city of Saraqeb has been liberated completely from Assad’s gangs,” Naji al-Mustafa, a spokesman for a Turkey-backed coalition of rebel factions, the National Liberation Front, said in a statement.
Syria’s state news agency SANA acknowledged there were “fierce clashes” between the army and “terrorist groups on the Saraqeb front”.
State media reported intense clashes near Saraqeb, saying rebels sent suicide car bombs and Turkish forces bombarded the area. It said a small group of insurgents reached the highway to score a “propaganda stunt”, adding “Syrian troops are dealing with them.”
‘Pounding rebel positions’
Al Jazeera’s Hashem Alhelbarra, reporting from Hatay, Turkey, said it remained to be seen whether the opposition fighters could hold the town.
“The Syrian army and the Russian military are now mounting a counteroffensive, pounding rebel positions and trying to hold their advance. It will be extremely difficult for the rebels to continue their control of Saraqeb against the backdrop of air strikes by Russian and Syrian forces,” he said.
Damascus, backed by Russian air strikes and Iranian armed groups, launched the offensive to take back the last rebel bastion of Idlib.
Nearly one million people have been forced to flee their homes since December in the largest displacement since the civil war in Syria broke out almost nine years ago.

BackPage 1 of 2Next →
In this article:soldiers, Turkish