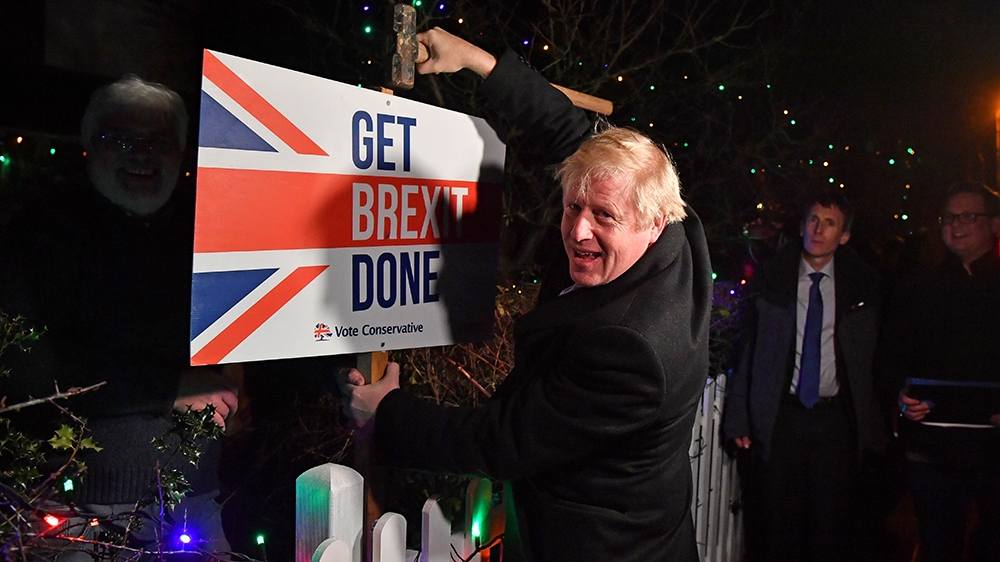 The UK’s Prime Minister and Conservative Party leader Boris Johnson poses after hammering a ‘Get Brexit Done’ sign into the garden of a supporter [File: Ben Stansall/Pool via Reuters]
UK Prime Minister Boris Johnson has signed the EU Withdrawal Agreement, paving the way for Brexit to take place on January 31.
In what is considered a formality, the European Parliament will vote on the agreement on January 29.
“The signing of the Withdrawal Agreement is a fantastic moment, which finally delivers the result of the 2016 referendum and brings to an end far too many years of argument and division,” said Johnson, referring to EU membership referendum four years ago.
“We can now move forward as one country – with a government focused upon delivering better public services, greater opportunity and unleashing the potential of every corner of our brilliant United Kingdom, while building a strong new relationship with the EU as friends and sovereign equals.”

Today I have signed the Withdrawal Agreement for the UK to leave the EU on January 31st, honouring the democratic mandate of the British people. This signature heralds a new chapter in our nation’s history. pic.twitter.com/IaGTeeL2is
— Boris Johnson (@BorisJohnson) January 24, 2020

BackPage 1 of 2Next →
In this article:Johnson, signs