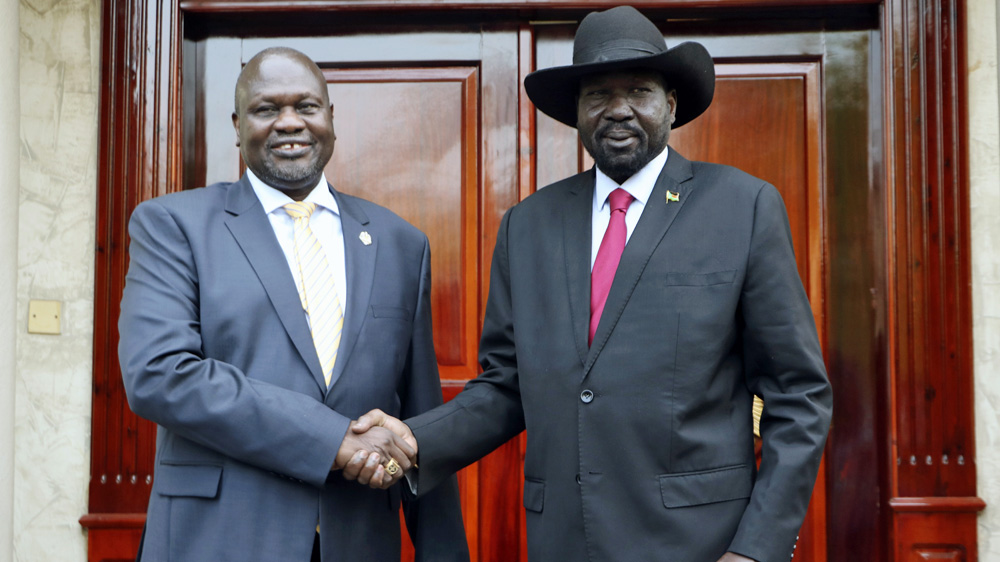 Rival leaders in war-torn South Sudan face a February 22 deadline to form a long-delayed government of national unity.
But just a few days before the milestone, hopes for a breakthrough dampened after Riek Machar, a former vice president and leader of the Sudan People’s Liberation Movement-in-Opposition (SPLM-IO), expressed his dissatisfaction with a peace proposal made by his rival, President Salva Kiir.
More:

Announcing a “painful” compromise, Kiir on Saturday said the world’s youngest country would return to a system of 10 states from 32, a key opposition demand, plus the three “administrative areas” of Pibor, Ruweng and Abyei.
A contentious issue that has lingered for several years, the number of states is one of the main sticking points of a peace agreement that has faltered on several fronts.
While Machar said he appreciated Kiir’s decision to “revert to 10 states”, he expressed his dissatisfaction with the creation of the three administrative areas.
“The issue of the number of states is contentious because they are the political bases of the top politicians in South Sudan,” James Okuk, a lecturer of politics at the University of Juba, told Al Jazeera.
In a statement calling Kiir to reconsider his decision, Machar said the establishment of the three areas “opens up another Pandora’s box” that defeated the purpose of reverting to 10 states.
“The refusal of Dr Riek Machar to accept the … three administrative areas … is a negotiating position from [his] SPLM/A-IO – it is not rejection of 10 states,” Okuk said.

When it gained independence from Sudan in 2011, South Sudan had 10 states, as set out in its constitution.
Two years later, the country descended into war when Kiir accused his former deputy, Machar, of plotting a coup. The conflict has so far killed at least 380,000 people and forced millions from their homes, with nearly half the country in dire poverty.
In 2015, a fragile peace deal came under further pressure when Kiir increased the number of states from 10 to 28, and later 32 – before reverting on Saturday to 10 plus the three “administrative areas”.
Of the three areas, the oil-rich Ruweng in the north is thought to be the most contentious and the scene of some of the heaviest fighting during the war.
Oil provides almost all of the government’s revenue, making it one of the world’s most oil-dependent nations.
“During the war, both sides unilaterally formed their own states with new boundaries,” said Alan Boswell, a senior analyst with the International Crisis Group.
“The dispute over the configuration of states became a major impasse blocking the peace process from moving towards a unity government,” he added.
“Machar risks alienating the regional power brokers if he appears to be rejecting compromise,” he added.

Under pressure from countries in the region, as well as the United States and United Nations, Kiir and Machar in 2018 signed another peace agreement.
Under the deal, they agreed to form a unity government in May 2019 but failed to meet the deadline amid disputes over territory and security arrangements.
A second deadline was missed in November last year and pushed back by 100 days, prompting the US to recall its ambassador and impose sanctions on senior officials for their role in perpetuating the conflict.
Against the lingering stand-off and a battered economy, South Sudanese said they hoped for a quick resolution.
“The decision by President Salva Kiir to revert to 10 states plus three administrative areas gives assurance that peace is closer,” Dhieu William, a Juba resident, told Al Jazeera.
“The two parties have to show a certain degree of commitment to restore peace and win the hearts and minds of South Sudanese,” William said.
For Okuk, the rival sides “have no other desirable alternative available except to compromise and form the new government without further delays, and then carry on with the pending tasks during the transitional period”.
Boswell agreed.
“A return to war cannot be an option in South Sudan, especially since the two sides stopped fighting over a year ago,” he said.
“Ultimately, South Sudan’s regional neighbours will need to help broker a path forward between both sides to make sure the peace deal holds.”
Continue Reading…