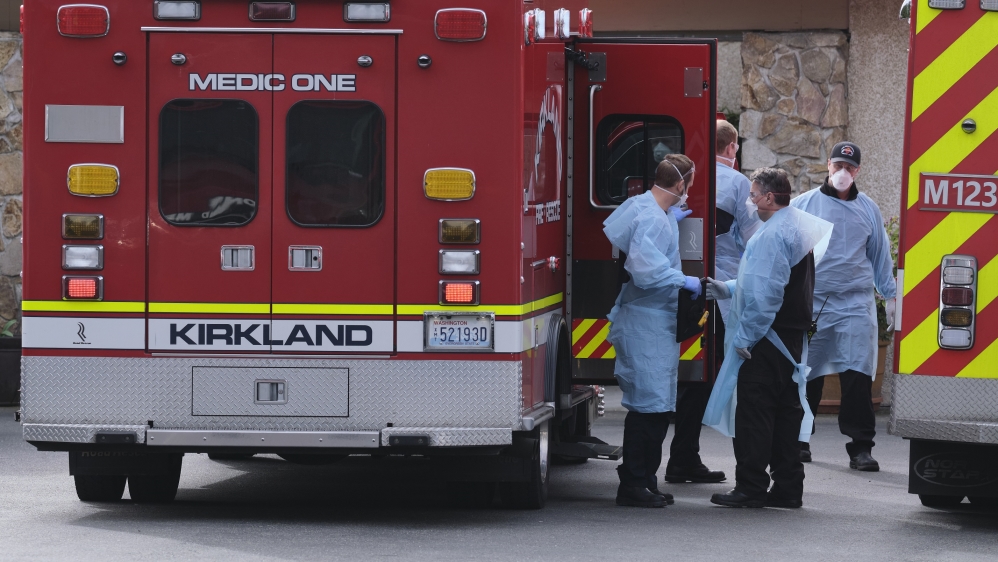 The death toll in the United States from the coronavirus rose to 12 late on Thursday when King County in the state of Washington reported the latest death, according to Reuters news agency.
Of the 12 US deaths, 11 are in Washington state and one in California.
Many of the cases in Washington have been linked to an outbreak at a nursing facility in the Seattle suburb of Kirkland, including six deaths.
More:

Another 72-year-old California man, who was recently on a cruise ship with passengers suspected of having coronavirus, had also died on Thursday. But it is unclear if he had the disease.
The news comes as the US state of Texas reported two new cases in Harris County on Thursday, according to the Houston Chronicle newspaper, bringing to at least 14 the new cases in the entire state.
Across the US, there are now at least 129 cases confirmed by the Centers for Disease Control and Prevention as of March 5. Other news reports says the number of cases has already reached at least 225.
Meanwhile, officials in the state of California are scrambling to deal with a cruise ship carrying 3,500 passengers and crew, following reports of suspected cases on board.
Ireland also reported its first coronavirus transmission not associated with travel to Italy, bringing the number of cases to 13, more than double a day earlier.
Globally, more than 95,000 people have been diagnosed with the disease, the vast majority in China, with 3,015 deaths in China and 267 deaths across the globe, many in Italy and Iran.
This is Ted Regencia monitoring the coronavirus updates from Kuala Lumpur.
Here are all the latest updates.
Friday, March 6
04:15 GMT Friday – South Korea vows ‘reciprocal’ countermeasures to Japan’s coronavirus travel limits
South Korea said on Friday it will consider countermeasures to Japan’s “unjust, unacceptable” travel restrictions barring visitors from areas which have been hard hit by the coronavirus epidemic, according to Reuters.
The presidential National Security Council met after Japan said it would bar arrivals from highly affected areas in South Korea and Iran and order a two-week quarantine for those from other regions.
“It is unacceptable that the Japanese government took such an unjust action without prior consultations with us, and we will explore necessary countermeasures based on principles of reciprocity,” the council said in a statement.
04:15 GMT Friday – Philippines reports two new infections
Philippine Health Secretary Francisco Duque III announced on Friday two new coronavirus infections bringing the total confirmed cases to five.
One of the patients had reportedly traveled to Japan, while the other person “has no known history of travel outside the country”. The second patient reported on Friday reportedly frequented a mosque in Metro Manila before the infection was confirmed.
While there are only five confirmed cases in the Philippines, more than 80 Filipinos working abroad have contracted the disease, most of whom were working on board the Diamond Princess cruise ship.

While there are only five confirmed cases in the Philippines, more than 80 Filipinos working abroad have contracted the disease [File: Eloisa Lopez/Reuters]

BackPage 1 of 2Next →
In this article:coronavirus, death