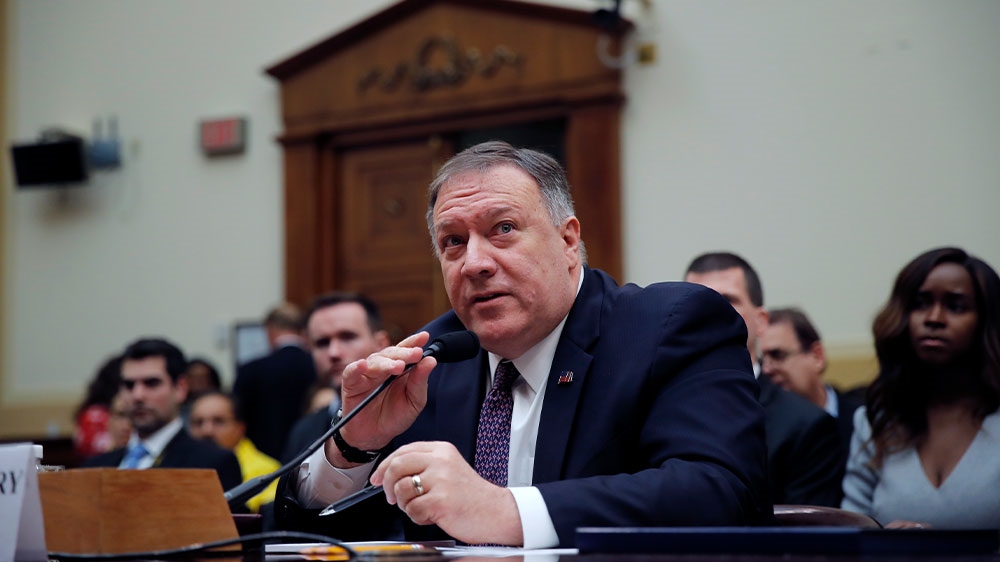 Washington, DC – US Secretary of State Mike Pompeo was grilled on Friday by Democrats on a House panel over the United States killing of top Iranian commander Qassem Soleimani and the US response to the coronavirus.
Appearing before the House Foreign Affairs Committee for two hours, Pompeo defended President Donald Trump’s decision to order the assassination of Soleimani, claiming Americans in the Middle East are safer now because Iran has been deterred from aggression.
“We made clear that we are willing and able to impose costs on our adversaries if they threaten or attack us,” Pompeo told the committee in the long-awaited hearing that also included a number of questions on the coronavirus.
More:

The Trump administration has offered shifting explanations for the air attack that killed Soleimani and several others at the airport in Baghdad, Iraq.
Initially, the president and his advisers said they had information that Soleimani was planning an “imminent attack”.
Later, in a legally mandated report to Congress, the Trump administration abandoned that claim and argued prior attacks planned by Soleimani against US forces, coupled with rising provocations from Iranian-backed armed groups in Iraq justified the strike.
“One hundred percent in a very short timeframe, he was in the region actively plotting to kill Americans,” said Pompeo, who appealed to the fractious committee on Friday for support for Trump’s policy towards Iran.
Two Democratic members of the House of Representatives Abigail Spanberger and Joaquin Castro said the intelligence information provided by the administration to Congress behind closed doors in the days after the strike did not show an imminent threat.
“I have seen that classified information and after reviewing it, I don’t think that you are telling us the truth,” Castro told Pompeo pointedly.

BackPage 1 of 2Next →
In this article:Democrats, grill