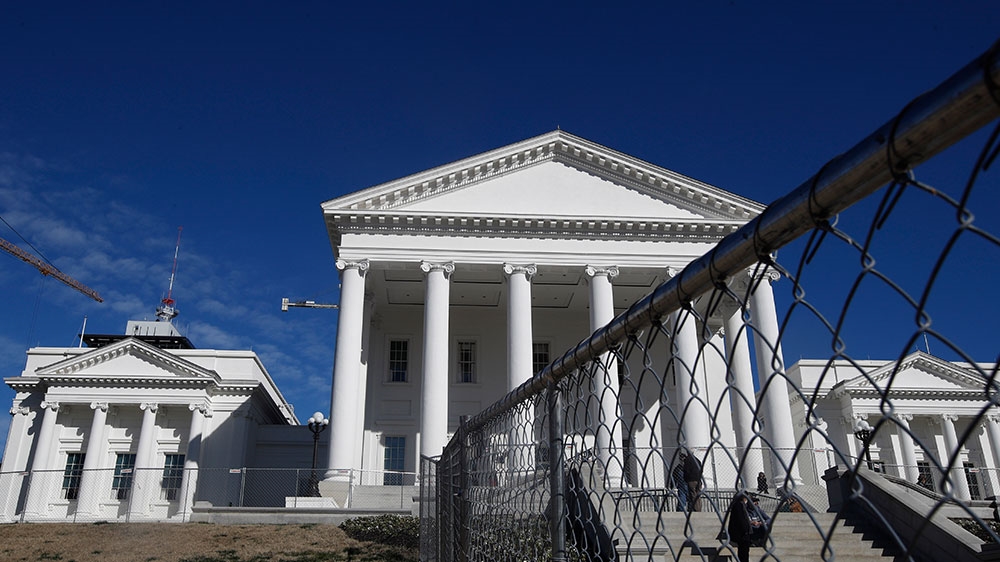 The US state of Virginia is bracing for a pro-gun rally on Monday that experts and political leaders warn could descend into violence.
The rally, billed by its organisers as a peaceful event to lobby legislators to protect the Second Amendment, is expected to draw dozens of militia groups to the state capital, Richmond, according to social media and statements by the groups.
More:

US: FBI arrests three white supremacists ahead of pro-gun rally

It is time for Facebook to stop coddling the far right

“We have received credible intelligence from our law enforcement agencies of threats of violence surrounding the demonstration planned for Monday, January 20,” said Virginia’s Democratic Governor Ralph Northam.
“This includes extremist rhetoric similar to what has been seen before major incidents, such as Charlottesville in 2017,” he tweeted, referring to the Virginia white supremacist rally in which a neo-Nazi rammed his car into a group of anti-racist protesters, killing 32-year-old anti-racist demonstrator Heather Heyer.

Citing the threats, Northam declared a state of emergency in the state capital that bans all weapons from the Capitol grounds from Friday through Tuesday.
Virginia and gun control
The pro-gun “Lobby Day” is an annual event during which pro-gun groups take to the Virginia Capitol grounds to lobby their state legislators. This year’s event, effectively endorsed by President Donald Trump, comes as the now-Democratic state legislature and governor seek to push through new gun control measures.
Those measures include limits on the purchases of handguns, background checks for firearm transfers and enabling local governments to ban guns in parks and other public spaces.
The three bills passed the state Senate last week and could be voted on in the House of Delegates as early as this week. Other bills are being considered, including a so-called “red flag” bill, which would allow law enforcement and lawyers to seek emergency orders to confiscate or block the sale of firearms to anyone deemed “a substantial risk of injury to himself or others”.

A sign warns visitors not to enter the Virginia State Capitol building with their firearms as security ramps up before a Monday rally by gun rights advocates and militia members in Richmond, Virginia [Jonathan Drake/Reuters]

Advertisement. Scroll to continue reading.
BackPage 1 of 2Next →
In this article:Fears, violence