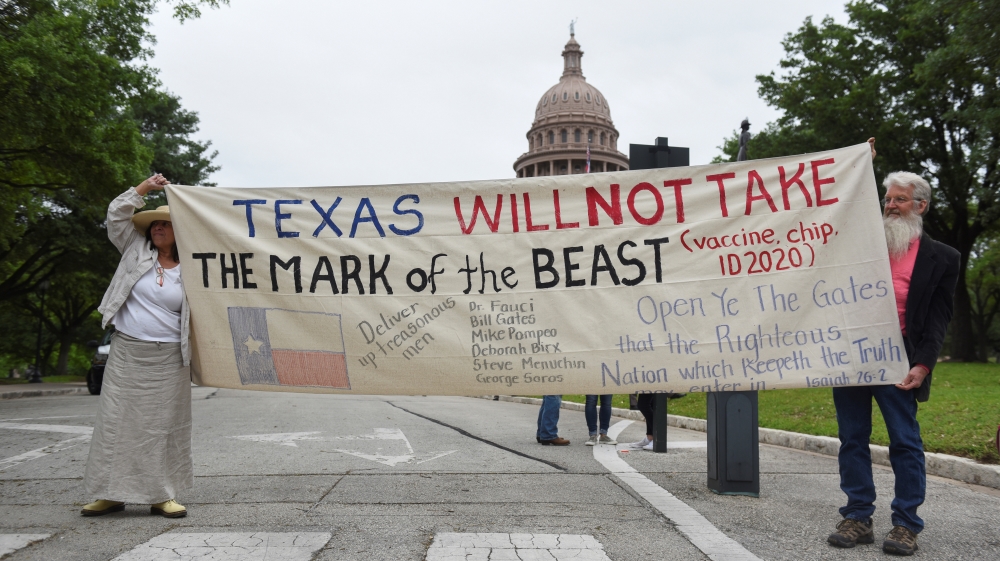 Hundreds of people have demonstrated in cities across the United States against coronavirus-related stay-at-home rules – with the explicit encouragement of President Donald Trump.
Some Americans, who live in parts of states with lower infection rates, have been made restless by restrictions that have more than 90 percent of the country under stay-at-home orders.
More:

How many coronavirus cases does each US state have?

An estimated 400 people gathered in Concord, New Hampshire, according to an AFP news agency photographer, while a similar rally outside Maryland’s statehouse in Annapolis drew about 200 protesters.
More than 250 people showed up in the Texas capital of Austin, as such protests continued to spread and drew encouragement in certain Democratic-led states from tweets by Trump – who has said he favours a quick return to normal practices.
Protests have also taken place in Republican-led states like New Hampshire.
Their common demand was that the stay-at-home order for the state of 1.3 million people be called off before its scheduled May 4 end date.

Earlier this week, similar protests erupted in the capitols of Minnesota, Michigan and Virginia.
The demonstrations, which also featured large crowds of people neither practising social distancing nor wearing face coverings, angered governors who have been trying to bring coronavirus outbreaks under control.
As of Friday morning, New Hampshire had reported 1,287 confirmed cases of coronavirus and 37 deaths.
The US has by far the world’s largest number of confirmed coronavirus cases, with more than 706,000 and at least 31,000 deaths. New York state accounts for nearly half of those deaths.
Most Americans – by a two-to-one margin – worry about virus restrictions being lifted too soon, not too late, a recent Pew survey found.   But demonstrators found encouragement on Friday from the president himself, who in a series of tweets called to “LIBERATE” Michigan, Minnesota and Virginia – all states with Democratic governors – from stay-at-home orders.
While Trump agitates to get the country back up and running sooner rather than later as he faces re-election in November, the Pentagon announced on Saturday it was extending travel restrictions for its personnel until the end of June.

Trump has repeatedly called for the earliest possible return to normality as virus-related closings have had a crushing effect on American workers and businesses.
But health experts have cautioned that to avoid a second wave of infections as people return to work, extensive testing must be available to track infections, as well as contact tracing and antibody testing to learn who had been previously infected and might have some immunity.
Continue Reading…

Trump: Social distancing norms should be same for Easter, Ramadan

Hundreds of former officials who served under President George W. Bush are gearing up to endorse presumptive Democratic Nominee Joe Biden. The group of officials — which include members of Mr. Bush’s cabinet and other senior officers — has reportedly formed a political action committee dubbed 43 Alumni for Biden. Mr. Bush was the 43rd… 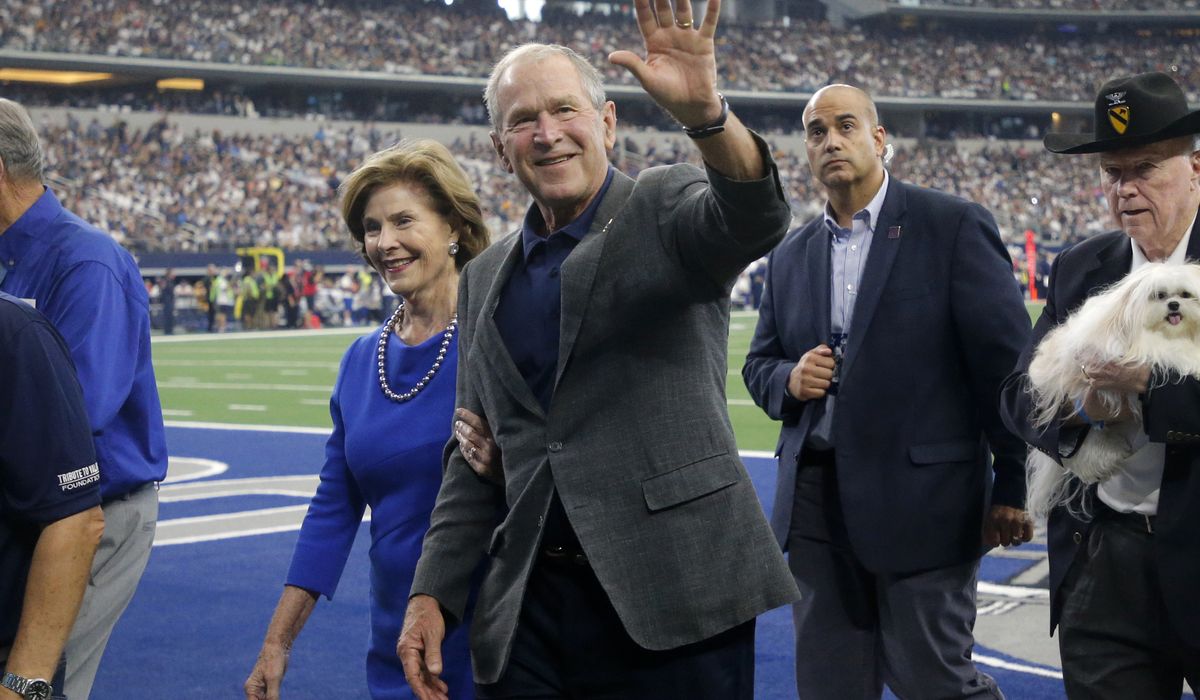 The group of officials — which include members of Mr. Bush’s cabinet and other senior officers — has reportedly formed a political action committee dubbed 43 Alumni for Biden. Mr. Bush was the 43rd president.

“We know what is normal and what is abnormal, and what we are seeing is highly abnormal. The president is a danger,” Jennifer Millikin, one of the 43 Alumni organizers, who worked on Bush’s 2004 re-election campaign and later in the General Services Administration, told Reuters.

The PAC said it expects to launch a website and Facebook page on Wednesday and will release testimonial videos that feature high-profile Republicans praising the former Vice President. The group also intends to hold “get-out-the-vote” efforts in battleground states, according to the publication.

Mr. Bush’s office said it has been informed about the upcoming efforts but is not involved in the campaign.

“This November, we are choosing country over party,” said Kristopher Purcell, a former communications official in the Bush administration. “We believe that a Biden administration will adhere to the rule of law… and restore dignity and integrity to the White House.”

Hundreds of Iraqis have gathered in central Baghdad for fresh anti-government protests demanding better living conditions and an overhaul of the country’s political system, just days after the formation of a new government. The gathering in Tahrir Square on Sunday came after Mustafa al-Kadhimi, the country’s new prime minister, promised to release demonstrators arrested during the… 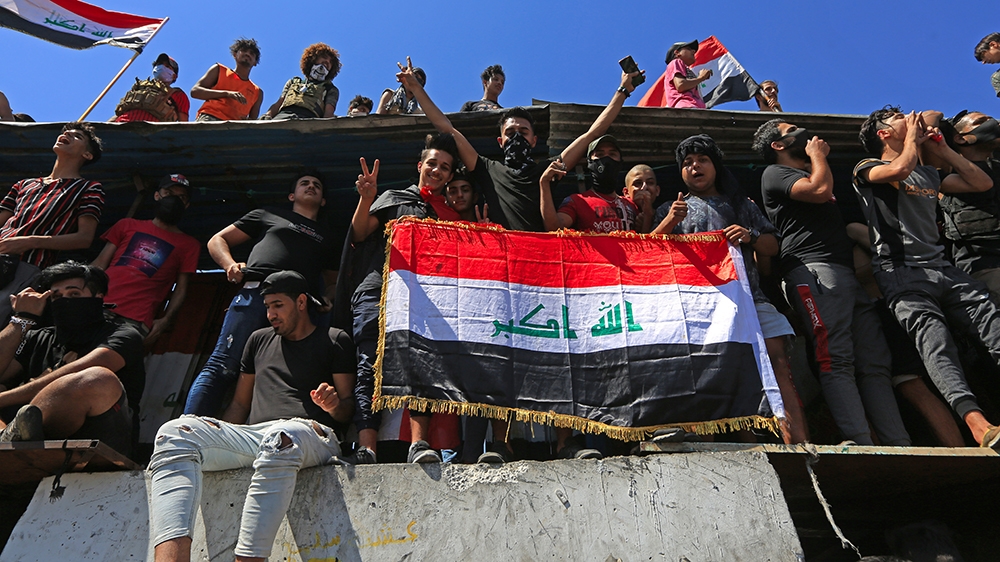 Hundreds of Iraqis have gathered in central Baghdad for fresh anti-government protests demanding better living conditions and an overhaul of the country’s political system, just days after the formation of a new government.
The gathering in Tahrir Square on Sunday came after Mustafa al-Kadhimi, the country’s new prime minister, promised to release demonstrators arrested during the mass protests that erupted in October last year.
More:

Iraq, oil and the future of its youth

Following his first cabinet meeting, al-Kadhimi on Saturday also pledged justice and compensation to relatives of more than 550 people killed since the start of the popular demonstrations.
The prime minister was Iraq’s spy chief when the protests – the bloodiest in Iraq’s recent history – broke out, and his pledges came as calls spread on social media for renewed demonstrations on Sunday.
Sunday’s protests stretched to other areas, including Iraq’s southern city of al-Nasriya.
Al Jazeera’s Simona Foltyn, reporting from central Baghdad, said the gathering was the “most significant” since March 17, when a curfew was imposed in an attempt to stem the spread of the coronavirus.
“Since then, Tahrir Square has been virtually empty, with a few dozen people remaining in the tents that have been set up here,” she said.
Foltyn reported that “a few hundred people” had gathered in Tahrir Square as of 10:00 GMT, with some manning the barricades on top of Republican Bridge.
“It’s pretty small compared to what we saw in the early days of the protests … but people are still flocking to Tahrir Square so the numbers may rise throughout the day,” she added.

The formation of the new government came some six months after former Prime Minister Adel Abdul Mahdi, who has been leading a caretaker administration, resigned in the face of the mass protests calling for the departure of Iraq’s ruling elite accused of driving the country into dysfunction and economic ruin.
The battle over government portfolios since Abdul Mahdi’s resignation in November last year prevented two previous nominees for prime minister from forming a cabinet and deepening the country’s political crisis.
To earn a vote of confidence in Parliament, al-Kadhimi had to appease the main political parties by letting them pick ministers in his cabinet – an informal yet deeply entrenched power-sharing system known as apportionment.
“Protesters still have demands that go well beyond the appointment of a new prime minister,” Foltyn said.”They still demand a complete overhaul of the political system and they say that the political parties that are responsible for the failures of the past government are still controlling Parliament.”
Sinan Antoon, an Iraqi novelist, believes that the protests will continue, mainly because al-Khadhimi is the “product of the very same system” that the protestors have been rallying against.
“While releasing the detainees is good, these gestures and any other cosmetic changes are not going to fool the protesters nor quell the protests,” Antoon told Al Jazeera.
“The protests are against decades of corruption and criminality and against a political class beholden to foreign influence and al-Kadhimi is an insider,” he said.
In his speech, al-Kadhimi also promised that all pensions would be paid out in the coming days, rescinding a decision taken by the previous government just before it stepped down that blocked all state spending, including civil servants’ salaries and pension payments – relied on by one in five Iraqis.
“The announcements were quite bold for his first cabinet meeting,” Foltyn said. “It was clear that al-Khadimi was wasting no time to try to mend the rifts between the demonstrators and the government.”

To date, oil-rich Iraq has reported 2,679 confirmed coronavirus cases and 107 related deaths.
An implosion of oil prices amid the coronavirus pandemic has raised concerns that Iraq will have little option but to impose austerity policies that could give rise to renewed demonstrations.
“Protesters are saying that the will try to mobilise the protest movement again to see actual results,” Foltyn said.
“What remains to be seen is whether the protests will once again gain momentum and reach the same numbers as last year.”
Continue Reading…

A 6.8-magnitude earthquake rocked a sparsely populated part of eastern Turkey on Friday, killing at least 18 people, injuring more than 500 and leaving some 30 trapped in the wreckage of toppled buildings, Turkish officials said. Rescue teams from neighbouring provinces were dispatched to the affected areas, working in the dark with floodlights in the… 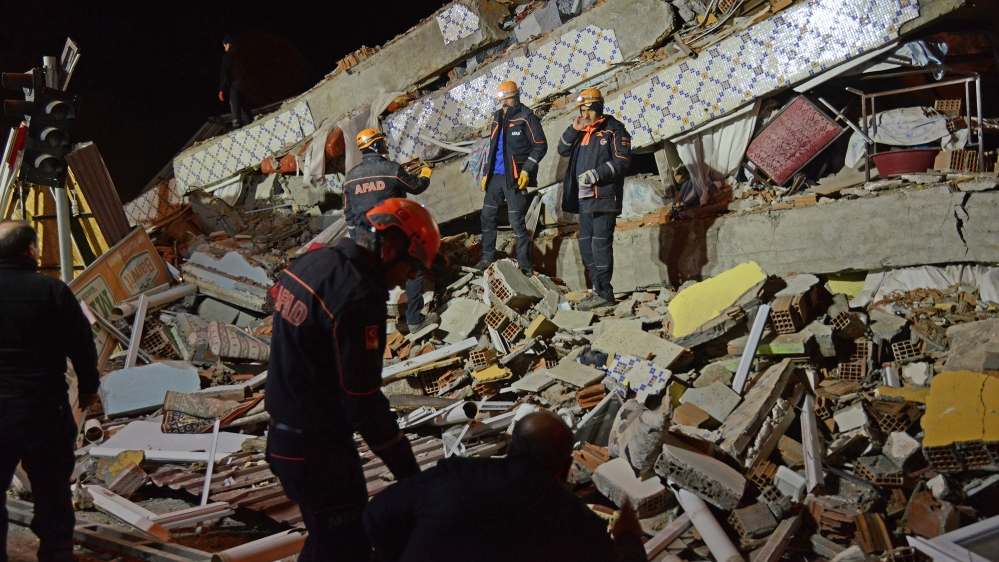 A 6.8-magnitude earthquake rocked a sparsely populated part of eastern Turkey on Friday, killing at least 18 people, injuring more than 500 and leaving some 30 trapped in the wreckage of toppled buildings, Turkish officials said.
Rescue teams from neighbouring provinces were dispatched to the affected areas, working in the dark with floodlights in the freezing cold, and Defence Minister Hulusi Akar said troops were on standby to help.
More:

Hundreds of residents were left homeless or with damaged homes.
TV footage showed rescuers pull out one injured person from the rubble of a collapsed building in the district of Gezin, in the eastern Elazig province.
Around 30 were believed to be trapped inside collapsed structures in Elazig province, Interior Minister Suleyman Soylu said.
Health Minister Fahrettin Koca, who travelled to the afflicted area together with Soylu, said 13 people were killed in Elazig, including two people who suffered heart attacks, and five others died in Malatya.
A total of 553 people were hurt, including 11 who were in serious condition.

Residents walk on a street as Turkish officials and police arrive at the scene of a collapsed building following a 6.8 magnitude earthquake in Elazig, eastern Turkey on Friday evening [Ilyas Akengin/Demiroren News Agency via AFP]

Some 30 buildings had collapsed from the quake in the two provinces, according to Murat Kurum, the environment minister.
Turkish President Recep Tayyip Erdogan said on Twitter that all measures were being taken to “ensure that the earthquake that occurred in Elazig and was felt in many provinces is overcome with the least amount of loss.”
The quake struck at 8:55pm local time (17:55 GMT), at a depth of 6.7km (4.1 miles) near the town of Sivrice in Elazig, the Disaster and Emergency Management Presidency, or AFAD, said. It was followed by several aftershocks, the strongest with magnitudes 5.4 and 5.1.
Elazig is some 750km (465 miles) east of the capital, Ankara.
People in Elazig whose homes were damaged or were too afraid to go indoors were being moved to student dormitories or sports centre amid freezing conditions.
Elazig Governor Cetin Oktay Kaldirim told NTV television that a fire broke out in a building in Sivrice, near the epicentre, but was quickly brought under control.
Interior Minister Soylu was at a meeting on earthquake preparedness when the quake struck.
The Kandilli seismology centre in Istanbul said the quake measured 6.5, while the US Geological Survey gave the preliminary magnitude as 6.7, and said the earthquake affected not only Turkey but also Syria, Georgia and Armenia.
Different earthquake monitoring centres frequently give differing estimates.
NTV said the earthquake was felt in several Turkish provinces and sent people running outdoors in panic.
Turkey sits on top of two major fault-lines and earthquakes are frequent. Two strong earthquakes struck northwest Turkey in 1999, killing around 18,000 people.
A magnitude-6 earthquake killed 51 people in Elazig in 2010.
Continue Reading…