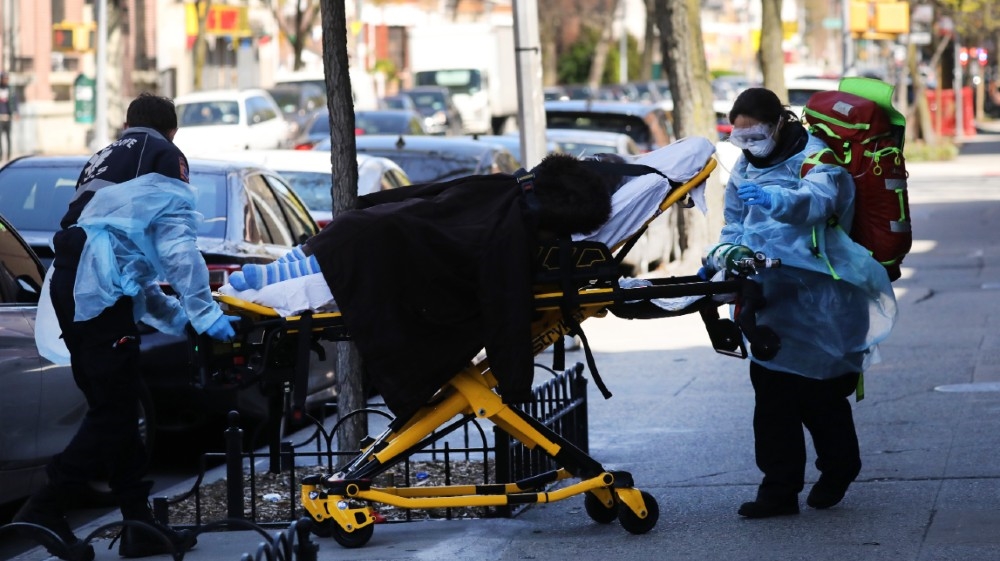 Some state governors in the United States began to reopen portions of their economies on Friday even as the death toll from the coronavirus hit the grim milestone of 50,000.
Health officials at Johns Hopkins University reported more than 3,300 new coronavirus deaths in the US in the last 24 hours, one of the deadliest days since the outbreak began. There have now been more than 890,000 cases in the US since the virus was first detected in the country.
More:

Mexico: 14 migrants get COVID-19 after US deports man with virus

New York remains the hardest-hit state, with more than 263,000 confirmed cases and nearly 16,000 deaths. Though New York is still a hot spot, new hospitalisation rates are coming down.
Reopened economy?
Strict social distancing measures and business closures in New York and elsewhere, while potentially curbing the spread of the virus, have exacted a toll on the US economy. At least 26 million people have sought unemployment benefits in the last five weeks, the most since the Great Depression of the 1930s.
Governors in at least three states – Oklahoma, Alaska and Georgia – announced that they would begin lifting some of those restrictions on Friday, even as other states such as California, Massachusetts and Illinois see spikes in cases.
Georgia received the most attention for its plans, being the first state to make them public. The state will allow certain businesses, including salons, gyms and bowling alleys to allow customers.

Governor Brian Kemp, a first-term Republican, was one of the last governors to issue a stay-at-home order on April 3.
Currently, Georgia has reported roughly 22,000 confirmed cases and about 900 people have died from COVID-19, the disease caused by the coronavirus.
The move has placed Kemp at odds with leaders of his state’s largest cities.
“I expect to see our numbers continue to rise in the state” after the reopening, Atlanta Mayor Keisha Lance Bottoms said in an appearance on CNN on Friday
Bottoms insisted that any slowdown in the rate of infection in Georgia has come as a result of large metropolitan areas such as hers aggressively pursuing social distancing and other preventive measures. Despite the governor’s edict, she said, the state is not out of the woods and she urged people to continue abiding by the stay-at-home measures.
“Nothing has changed,” she said.
Experts have warned that reopening too soon could backfire, causing another spike in cases. A model from the Institute for Health Metrics and Evaluation at the University of Washington suggests Georgia will not be ready to reopen until June 22.
The reopened businesses will have to adhere to social distancing guidelines, Kemp said, but it remains unclear how this will work in beauty salons and tattoo parlours.
Trump claims
Despite tweeting support for a rapid reopening of some states last week, President Donald Trump this week said he opposed Kemp’s order to begin easing the coronavirus restrictions.

“I told the governor of Georgia, Brian Kemp, that I disagree strongly with his decision to open certain facilities,” Trump said. “But, at the same time, he must do what he thinks is right.”
Trump is expected to sign a $484bn aid package on Friday to boost support for small businesses. The president has also stated shortages of testing supplies and personal protective equipment will not last.
While Trump saw record-high job approval ratings early in the crisis, support for him has since plateaued to levels that have remained relatively constant throughout his presidency.
Trump has drawn ire for claims made during his daily news briefings, with just 28 percent of Americans saying they regularly get information from Trump about the coronavirus, according to a survey from the Associated Press-NORC Center for Public Affairs Research.
Only 23 percent say they have high levels of trust in what the president is telling the public, respondents said.
Those assertions include the suggestion during Thursday’s briefing that doctors test whether injecting disinfectant or bleach into the lungs of patients suffering from COVID-19 might cure them.
“I say, maybe you can, maybe you can’t. I’m not a doctor,” Trump said.
Scientists immediately slammed Trump’s comments, saying injecting disinfectants in a patient’s body was harmful and would likely cause death.
Continue Reading…