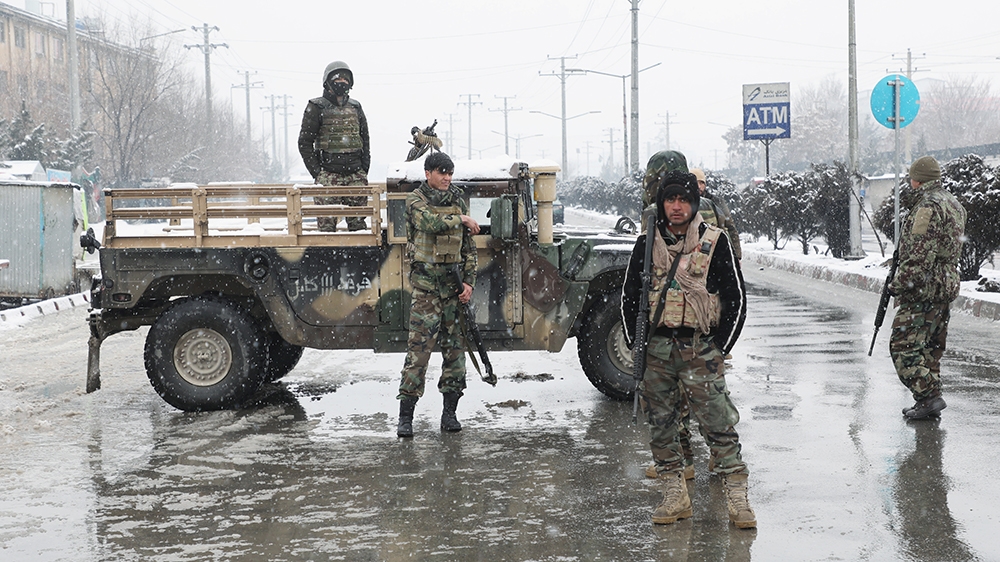 A week-long “reduction in violence” between the Taliban, the United States and Afghan security forces took effect on Friday, raising hopes for a resolution to the 18-year-long war.
The agreement struck during negotiations between US and Taliban representatives, if maintained, could secure a peace deal that would lead to a withdrawal of American forces from Afghanistan.
More:

In a televised address, Afghan President Ashraf Ghani announced the reduction in violence (RIV) would begin at midnight local time on Friday (19:30 GMT). The army will “remain on active defence status during the week”, he said.
Earlier, Javid Faisal, spokesman for Afghan National Security Adviser Hamdullah Mohib, said Afghan forces will keep up normal military operations against other armed groups, such ISIL (ISIS) during the RIV period.

“Local government and security officials have been instructed by the president himself on how to follow the regulations agreed upon for the RIV period,” he said, adding that Afghan forces will also retaliate to any violation of the understanding.
US Secretary of State Mike Pompeo said on Friday that upon successful implementation of this agreement, the US would move to sign a peace deal with the Taliban on February 29.
Soon after Pompeo’s announcement, Taliban spokesman Zabihullah Mujahid confirmed the development and said both sides will invite senior representatives to take part in the peace deal “signing ceremony”.
The Taliban’s statement also said the signing of the peace deal would be followed by intra-Afghan talks with various political parties in the country.
The Afghan armed group, which was removed from power in a US-led invasion in 2001, has previously refused to speak directly to the Kabul government, which it denounces as a “US puppet”.
‘Historic opportunity’
The two sides have been wrangling over the US demand for putting a ceasefire in place before the final peace agreement is signed. The deal is expected to outline the withdrawal of US troops and a guarantee that Afghan soil will not be used as a launchpad to conduct attacks on foreign countries.
The talks were launched in 2018 as part of a push by US President Donald Trump’s administration to strike a deal with the Taliban, which has been fighting the US-led forces in Afghanistan since it was toppled from power in 2001.
Trump has long expressed eagerness to bring US soldiers home and to end the country’s longest war as he seeks re-election in 2020. The two sides were on the verge of signing a peace agreement in September when Trump abruptly cancelled the talks after a Taliban attack killed an American soldier.
About 14,000 US troops and some 17,000 troops from 39 NATO allies and partner countries are stationed in Afghanistan in a non-combatant role.

Despite the heavy US presence, the Taliban now controls or holds influence over more Afghan territory than at any point since 2001 and has carried out near-daily attacks against military outposts throughout the country.
Pakistan and NATO welcomed Friday’s announcement.
“We hope the Afghan parties would now seize this historic opportunity and work out a comprehensive and inclusive political settlement for durable peace and stability in Afghanistan and the region,” said a statement from the Pakistani Ministry of Foreign Affairs.
NATO Secretary-General Jens Stoltenberg said the RIV will be a “critical test of the Taliban’s willingness and ability to reduce violence”. He added: “This could pave the way for negotiations among Afghans, sustainable peace, and ensuring the country is never again a safe haven for terrorists.”
Afghan political analyst Haroun Mir said although the announcement was a significant development, intra-Afghan talks would prove to be a major challenge.
“In order to reach a final settlement, we have to go through painful negotiations between the Afghan government and the Taliban and be able to make mutual concessions,” he said.
“Reaching a compromise will take a long time, which requires the blessings of all major stakeholders in the country, as well as regional powers and Afghanistan’s neighbours.”
The deal comes as Afghanistan is in the middle of a surge in violence.
More than 100,000 Afghans have been killed or injured since 2009 when the United Nations Assistance Mission in Afghanistan began documenting casualties.
About 34,000 Afghan civilians have been killed during that period, many of them children.
Continue Reading…

Sanders warns Russia to stay out of US presidential campaign