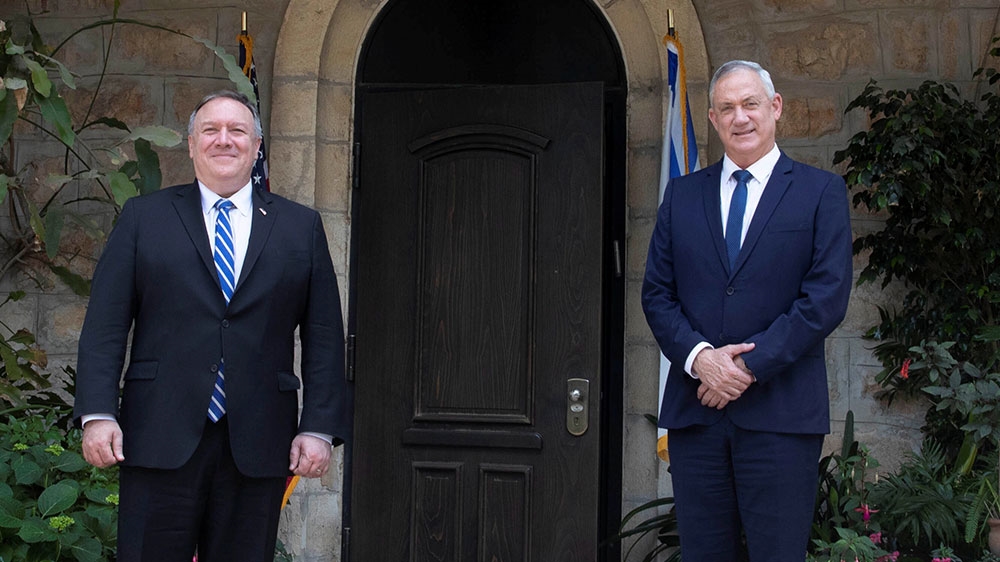 US Secretary of State Mike Pompeo has urged Israeli leaders to consider “all the factors” involved in a proposed de facto annexation of the occupied West Bank so that it squares with Washington’s plan for the region.
Pompeo visited Israel on Wednesday on a one-day trip that included meetings with Prime Minister Benjamin Netanyahu and his coalition partner Benny Gantz. He did not meet with Palestinian leaders.
More:

Pompeo told the Israel Hayom newspaper that they discussed annexation “but also many other issues related to it – how to deal with all the factors involved, and how to make sure the move is done properly to bring about an outcome in accordance with the vision of peace”.
Netanyahu and Gantz postponed the swearing-in of the new government to accommodate Pompeo’s one-day visit, which came as the Trump administration tried to return to business as normal by resuming governmental travel and reopening an economy devastated by the COVID-19 outbreak.
After battling to end a deadlock after three inconclusive elections over the past year, Netanyahu and the former army chief, Gantz, agreed last month to form a joint government.
Netanyahu, a right-winger in power since 2009, will serve as premier for 18 months with Gantz taking on the role for the same duration.
Their coalition agreement says the Israeli government can, from July 1, begin considering implementing the occupied West Bank annexations detailed in US President Donald Trump’s Middle East plan, which has been slammed by the Palestinians.
Unveiled in January, the controversial plan gives a green light from Washington for Israel to annex Jewish settlements and other strategic occupied West Bank territory.
‘Blatant attack’ on international law
The Palestinians have rejected Trump’s plan and cut ties with the Trump administration in 2017 over its pro-Israel stance.
Their chief negotiator Saeb Erekat said earlier this week that Pompeo’s team had not reached out before the secretary of state’s visit.
“The Trump administration is collaborating with Israel in its annexation plan in what is both an attempt at burying the rights of the Palestinian people as well as a blatant attack on a rules-based international system,” he said.

A general view shows Palestinian houses in the village of Wadi Fukin as the Israeli settlement of Beitar Illit is seen in the background, in the occupied West Bank [File: Nir Elias/Reuters]

According to several United Nations Security Council resolutions, Israeli settlements are illegal under international law, as they violate the Fourth Geneva Convention, which prohibits an occupying power from transferring its population to the area it occupies.
The Trump administration has repeatedly sided with Israel and against stances taken by the Palestinians and Arab states, including recognising Jerusalem as Israel’s capital and moving the US embassy there.
Last year, the US government said it would no longer abide by a 1978 State Department legal opinion that the settlements were “inconsistent with international law”.
Continue Reading…

‘This virus may never go away,’ WHO says