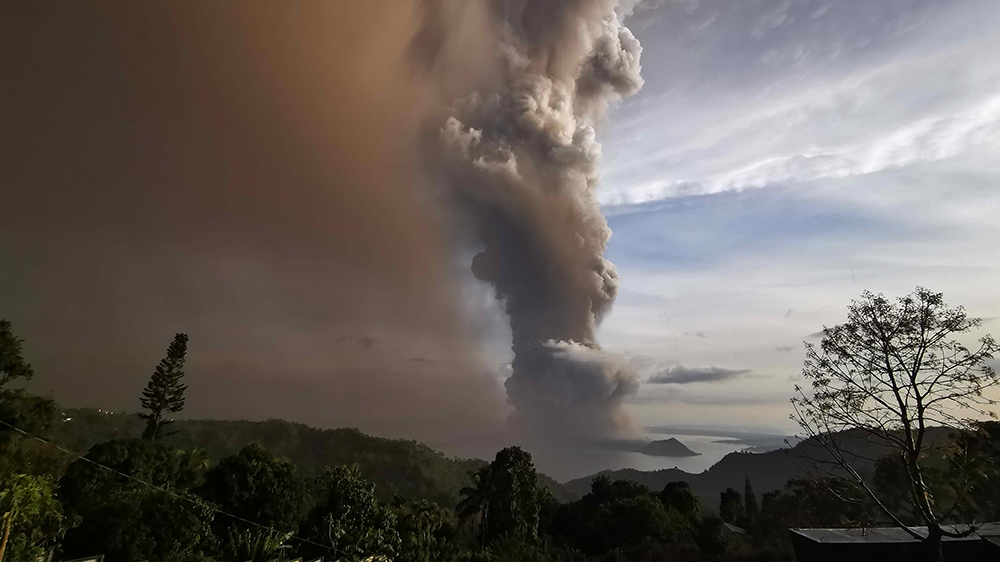 A volcano near Manila spewed a massive cloud of ash that drifted across the Philippine capital, forcing the cancellation of flights as authorities warned of a possible “explosive eruption”.
Thousands of people were evacuated on Sunday from the area near Taal volcano after it suddenly shot a column of ash and steam as high as 15km (9 miles) into the sky. Lightning crackled inside the smoke and tremors shook the ground.
About 8,000 residents of the volcano island and other high-risk towns were ordered to leave, with about 6,000 already out of the danger zone by Sunday evening, the National Disaster Risk Reduction and Management Council told reporters.
Taal, one of the world’s smallest active volcanoes, sits in the middle of a lake about 70km (45 miles) south of the centre of the capital.
Authorities said there was a risk an eruption could cause a tsunami in the lake.
“Taal is a very small volcano but a dangerous volcano,” said Renato Solidum, head of The Philippine Institute of Volcanology and Seismology. “It is unique because it is a volcano within a volcano.”
The institute raised the danger level posed by the volcano to 4 out of a possible 5 – meaning “hazardous explosive eruption is possible within hours to days”.
The Philippines lies on the Ring of Fire, a belt of volcanoes circling the Pacific Ocean that is also prone to earthquakes.
One of the most active volcanoes in the Philippines, Taal has erupted more than 30 times in the past five centuries, most recently in 1977.
An eruption in 1911 killed 1,500 people and one in 1754 lasted for a few months. “That is the worst case scenario,” Solidum said.
More:

BackPage 1 of 2Next →
In this article:tsunami, Volcanic