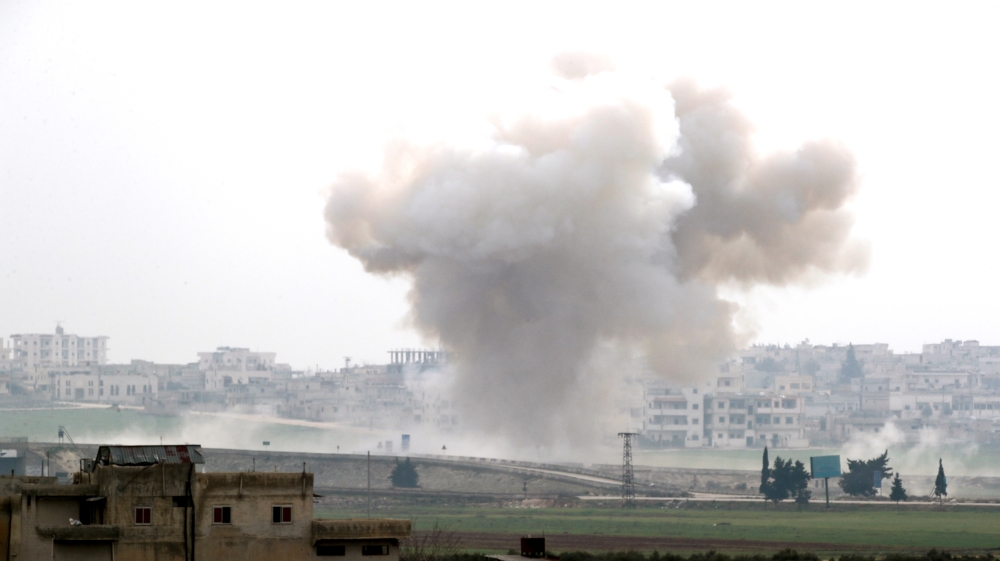 Acts that amount to “war crimes” have been committed by Russian-backed Syrian government forces in northwest Syria over the past year, according to an Amnesty International report.
The UK-based rights group said on Monday the attacks include indiscriminately targeting civilian infrastructures. It documented 18 attacks on medical facilities and schools that took place between May 5, 2019, and February 25, 2020, in Idlib, Hama, and western Aleppo.
More:

“Evidence shows that, in their entirety, the documented attacks by Syrian and Russian government forces entailed a myriad of serious violations of international humanitarian law,” the report said. “These violations amount to war crimes.”
The report found that the majority of the attacks occurred in January and February this year, during the government’s latest onslaught that aimed to capture the last opposition-held pocket in the country.
An escalation in fighting created the worst displacement crisis of the war in Syria, now in its 10th year. Nearly one million people were forced to flee, with many seeking shelter in the already overcrowded camps near the sealed border with Turkey.
A ceasefire has largely held since early March, but hundreds of thousands remain displaced and highly dependent on aid even as the rebel-held region braces for a possible outbreak of the new coronavirus.
Among the documented attacks were Russian air raids near a hospital in Ariha on January 29 that demolished at least two residential buildings and killed 11 civilians, it said.

A Syrian boy removes a dead chicken from the debris of a building hit in an air raid in Idlib [File: Umit Bektas/Reuters]

“I felt so helpless. My friend and colleague dying, children and women screaming outside … We were all paralysed,” a doctor, who survived the attack, told Amnesty, adding that it “took the civil defence two days to remove the bodies” from underneath the rubble of one the flattened buildings.
‘Raining shrapnel’
Amnesty also blamed the Syrian government for an attack using internationally banned cluster munitions on a school that killed three people in Idlib city on February 25.

A teacher who witnessed the attack said she knew the sound of cluster munition attacks “very well”.
“You hear a series of small explosions. As if the sky were raining shrapnel instead of water,” she said.
The report also highlighted threats to international aid and the depth of the humanitarian crisis, where unsafe displacement conditions and a strained humanitarian response persist.
Researchers interviewed 74 people, including direct witnesses of attacks, displaced people who provided accounts of conditions in displacement, local and international aid workers and UN staff members for the 39-page report.
“The latest offensive continued an abhorrent pattern of widespread and systematic attacks aimed at terrorising the civilian population,” Amnesty’s MENA Regional Director Heba Morayef said.
“Russia has continued to provide invaluable military support – including by directly carrying out unlawful air strikes – despite evidence that it is facilitating the Syrian military’s commission of war crimes and crimes against humanity.”
Syria’s war has killed more than 400,000 people and displaced millions since it started in 2011 with the brutal repression of anti-government protests.
Continue Reading…