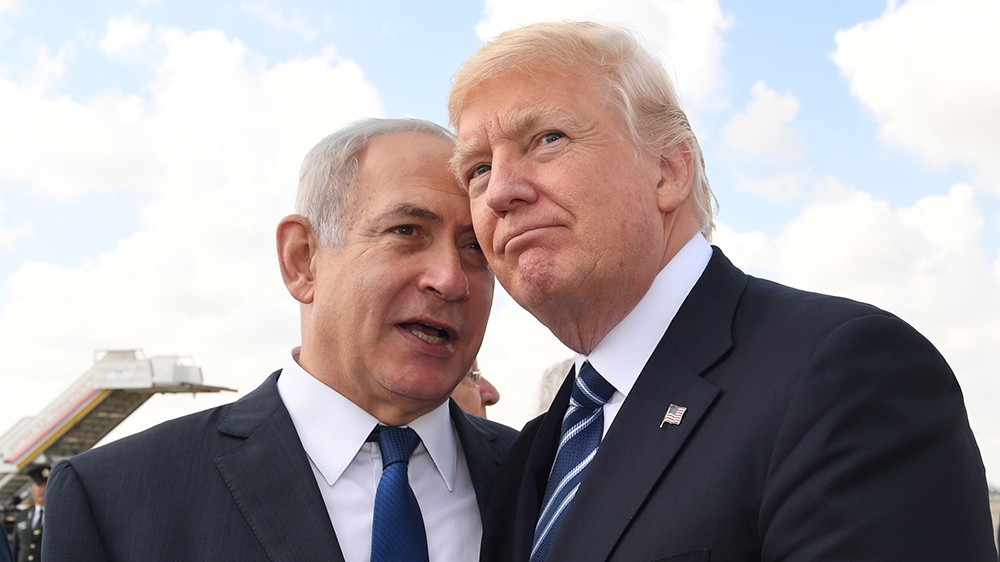 United States President Donald Trump is expected to release soon his long-awaited Middle East peace plan  – more than two years after his administration began drafting its vision for a solution to the Israeli-Palestinian conflict.
The policy proposal has been delayed multiple times and has been kept largely under wraps.
Here is what we know so far:
The timing
Trump said he will likely release details of his plan before holding separate meetings at the White House on Monday with Israel’s Prime Minister Benjamin Netanyahu and his rival in upcoming Israeli elections, Benny Gantz. The Palestinian leadership, which has rejected the proposal before it is even released, was not invited to Washington.
“It’s a great plan. It’s a plan that really would work,” Trump told reporters on Air Force One.
“I love doing deals,” he said.
“They say peace between Israel and the Palestinians is the toughest – the toughest of any deal.”
The plan would be rolled out as Trump’s Senate impeachment trial continues on Capitol Hill and as Netanyahu seeks parliamentary immunity from prosecution in corruption cases. Both leaders also face re-elections: Israelis are due back in the polls on March 2 and Trump is gearing up for the US presidential election on November 3.
The US has tried to release the plan multiple times before, but Israel has been engulfed in a political crisis after Netanyahu failed to form a majority government twice last year, creating uncertainty over who will be in charge to negotiate a peace deal.
“There have been several false starts by the US administration in the unveiling of a plan that has been ready for some time now,” said Lucy Kurtzer-Ellenbogen, the director of the Israeli-Palestinian Conflict Program at the United States Institute of Peace.
“Some think that the administration is running out of patience waiting for Israeli elections that may yet again not be conclusive,” Kurtzer-Ellenbogen told Al Jazeera.
Observers say by inviting both leading candidates, the US may be hoping to get Israel’s next prime minister on board in advance.
Palestinian rejection
The Palestinians have already dismissed “the deal of the century,” as the peace plan is widely dubbed, saying it will likely be heavily tilted in Israel’s favour – like several other steps taken by Trump since taking office in January 2017.
Over the past three years, the Trump administration has controversially recognised Jerusalem as Israel’s capital and relocated the US embassy there from Tel Aviv; reversed decades of US policy by refraining from endorsing a two-state solution; announced that it no longer views Israeli settlements in occupied territory as “inconsistent with international law”; stopped funding the United Nations’ Palestinian refugee agency UNRWA; and slashed hundreds of millions of dollars of aid to Palestinians, among other steps.
The Palestinian Authority (PA) cut off all talks with Washington since the first of these moves, and a spokesman for PA President Mahmoud Abbas said this week that the Palestinian leadership had a “clear and unwavering position” to reject any Trump-led initiatives.
In a Twitter post, Saeb Erekat, the secretary general of the Palestine Liberation Organization, said any proposal that ignored Palestinian rights would be “recorded in history as the fraud of the century”.

Reminder to the International Community:Israel is an Occupying Power of the State of Palestine on the 1967 borders ( East Jerusalem, West Bank and Gaza Strip ).Any deal, attempt or dictation that ignores this fact, will be recorded in history as the Fraud of the century
— Dr. Saeb Erakat الدكتور صائب عريقات (@ErakatSaeb) January 24, 2020

Trump said his administration has talked “briefly” to the Palestinians.

“But we will speak to them in a period of time,” he added. “And they have a lot of incentive to do it. I’m sure they maybe will react negatively at first, but it’s actually very positive to them.”
“We took away their money,” Trump added. “That’s a lot of money for them.”

Jordanian protesters take part in a protest against the “deal of the century”, after Friday prayers in Amman, Jordan, with banners reading “Down with the agreement of humiliation and shame” and “Jerusalem supports whoever supports it” [File: Muhammad Hamed/Reuters]

Israeli-Palestinian peace talks collapsed in 2014, and Palestinians say the policies of the Trump administration have rendered Washington incapable of being an honest broker in any future negotiations.
“This peace plan is a euphemism,” said Noura Erakat, a human rights lawyer and assistant professor at Rutgers University. “There is no peace involved in it.”
“It is an oppressive, top-down dictate to the Palestinians that the United States together with Israel are about to seal an oppressive status quo for Palestinians,” Erakat told Al Jazeera.
The Palestinians want Israel to fully withdraw from the occupied West Bank, Gaza Strip and East Jerusalem – territories Israel has been occupying since the 1967 war. The Palestinians want those territories to become part of a future independent state, with East Jerusalem as its capital. They also seek the right of return for millions of refugees.
Economic plan
The economic portion of the veiled plan was published on June 22, just before its presentation in a gathering in Bahrain, which was boycotted by the Palestinian leadership.
Trump’s son-in-law and senior adviser Jared Kushner proposed a $50bn investment fund during a two-day workshop called Peace to Prosperity aimed at boosting the Palestinian and neighbouring Arab economies, arguing that this approach could generate prosperity in the occupied Palestinian territories, and Jordan, Egypt and Lebanon.

BackPage 1 of 2Next →
In this article:Middle, Trump's