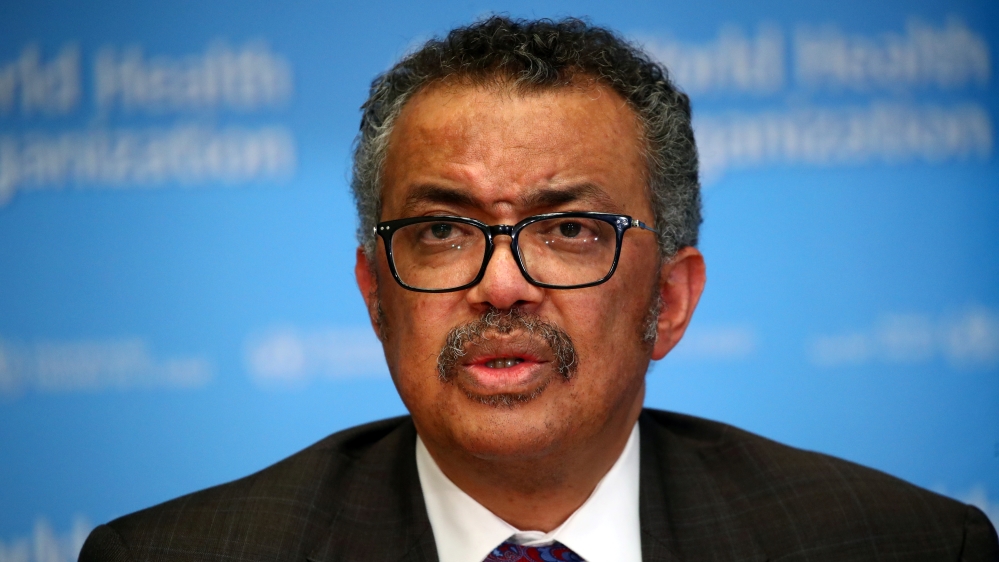 The confirmed death toll from the new coronavirus has exceeded 100,000 worldwide, as the United Nations’  global health agency – the World Health Organization – warned governments against rolling back measures introduced to curb the spread of the pandemic.
WHO Director General Tedros Adhanom Ghebreyesus said on Friday the agency would like to see an easing, but cautioned that “lifting restrictions could lead to a deadly resurgence”.
More:

Coronavirus testing methods: What you need to know

Speaking to reporters in Geneva, Switzerland, Tedros said there had been a “welcome slowing” of epidemics in some European countries – Italy, Germany, Spain and France – but there had been an “alarming acceleration” elsewhere, including community transmission in 16 countries of Africa.
His comments came shortly before a tally by the Johns Hopkins University showed that the number of confirmed deaths associated with COVID-19, the highly infectious respiratory disease caused by the new coronavirus, stood at 100,376.
Some health experts fear the actual toll is higher given the challenges of confirming the cause of death, especially outside of hospitals, as well as limited testing, different rules for counting the dead and possible cover-ups by some governments.

‘Real risk of resurgence’
As the new coronavirus virus spread across the globe, an increasing number of countries have imposed extraordinary curbs on movement and social contact in a bid to contain the spread of the disease and prevent healthcare systems from being overwhelmed.
With economically-crippling lockdowns extended in country after country, governments have been pressed to ease restrictions on key businesses and industries.
But with a vaccine at least a year away, the world faces an “uphill battle”, according to Yanzhong Huang, senior fellow for global health at the United States-based Council on Foreign Relations. He said that any one country or region’s success in containing the disease was shaky so long as the pathogen continues to sicken people elsewhere.
“There is a real risk of resurgence of cases for two reasons: the prevalence of asymptomatic people who might spread the disease without knowing they are sick, and the threat from imported cases,” he told Al Jazeera.
Around the world, public health officials and religious leaders alike have warned people against violating the lockdowns and social distancing rules over Easter and allowing the virus, which has infected more than 1.6 million people, to come storming back.
Authorities resorted to roadblocks and other means to discourage travel.
In Italy, where Prime Minister Giuseppe Conte on Friday announced an extension of the country’s lockdown until May 3, officials employed helicopters, drones and stepped-up police checks to make sure residents did no slip out of their homes.

Meanwhile, the WHO’s Tedros said he was particularly concerned by the large number of infections confirmed among health workers on the front lines in the fight against the pandemic.
“In some countries [there are] reports of up to 10 percent of health workers being infected,” he said. “This is an alarming trend.”
A new UN supply task force will coordinate and scale up the procurement and distribution of protective gear, lab diagnostics and oxygen to the countries that need it most.
“Every month we will need to ship at least 100 million medical masks and gloves, up to 25 million N95 respirators, gowns and face shields, up to 2.5 million diagnostic tests and large quantities of oxygen concentrators and other equipment for clinical care,” he said.
The WHO also chief warned that no country was immune from the pandemic.
“From this pandemic we have to try to learn … what the gaps are, this is a message even for the developed countries. Across the board you see a lack of preparedness of the public health system,” Tedros said.
“No country can claim it has a strong health system. We have to be really honest and assess and address this problem.”
Continue Reading…

Italy to remain in lockdown until at least May 3

An ‘extraordinary’ Easter in Jerusalem amid coronavirus closures