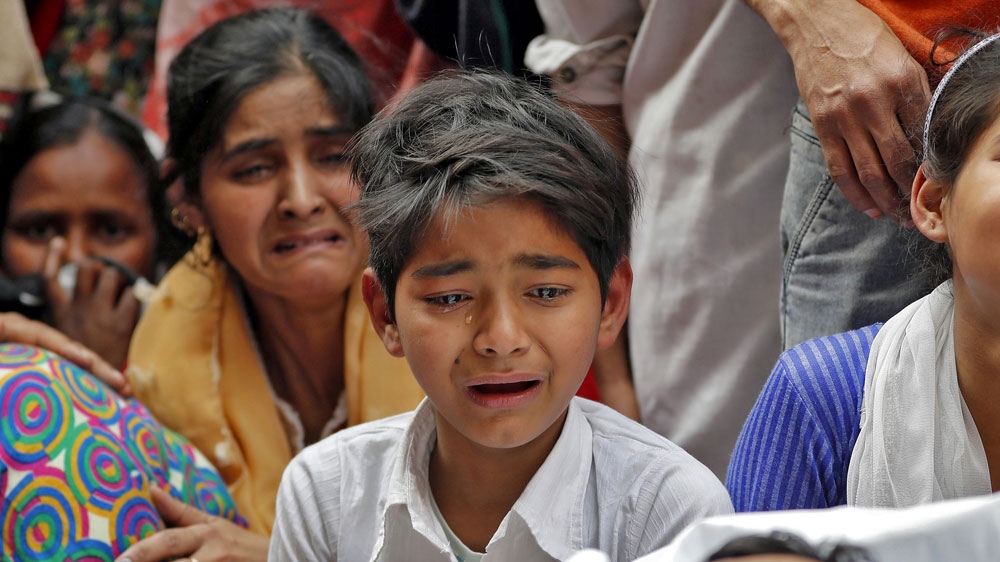 In the past couple of weeks, the Organisation of Islamic Cooperation (OIC), the Kuwait government, a royal princess of the United Arab Emirates (UAE), as well as a number of Arab activists have called out Islamophobic hate speech by Indians seen to be accusing the country’s Muslims of spreading the novel coronavirus.
A barrage of tweets and statements from individuals and institutions in the Gulf expressing their outrage over the hateful social media posts forced the Indian government to respond, including a Twitter post by Prime Minister Narendra Modi in which he stressed that “COVID-19 does not see race [or] religion”.
More:

India should be placed on religious freedom blacklist: US panel

‘Do not buy from Muslims’: BJP leader in India calls for boycott

How the coronavirus outbreak in India was blamed on Muslims

It started with right-wing Hindus accusing Muslims of a “conspiracy” to spread the coronavirus after dozens of cases were linked to a congregation of Tablighi Jamaat, a Muslim missionary movement, at their headquarters in New Delhi in the middle of March.
Hashtags such as #CoronaJihad trended for days on Twitter and panellists in TV debates called them “human bombs”, while many called for a ban on Jamaat. Its New Delhi office has been sealed.

We call on international organizations, especially the United Nations, the Security Council, the Organization of islamic cooperation and all human rights organizations, to intervene immediately to stop the violations committed against our Muslim brothers in India #India
— خالد السويفان (@alsuwaifan) April 20, 2020

On April 19, India’s Ministry of Home Affairs said more than 4,000 of the nearly 15,000 cases detected until that day were linked to the Jamaat, whose chief Mullah Saad Kandhalvi was charged with “culpable homicide” and money laundering and is likely to be arrested.
On Thursday, the total number of coronavirus cases in India was more than 33,000, with more than 1,000 deaths.

Arabs flag hateful posts
Following the Jamaat issue, a wave of Islamophobic posts was unleashed on social media by right-wing Hindus, some of them employed in Gulf countries.
Dubai-based Indian, Saurabh Upadhyay, asked Muslims to “accept they were the source of the pandemic” and called for the death of Jamaat members, describing them as “terrorists”. He deleted his tweets after social media users in the Gulf and India called him out.

Anyone that is openly racist and discriminatory in the UAE will be fined and made to leave. An example; pic.twitter.com/nJW7XS5xGx
— Princess Hend Al Qassimi (@LadyVelvet_HFQ) April 15, 2020

An old tweet by Tejasvi Surya, a young member of parliament belonging to Modi’s Bharatiya Janata Party (BJP), also resurfaced, provoking further outrage.
In his 2015 post, Surya had quoted a Canadian-Pakistani writer as claiming that “95 percent of Arab women have never had an orgasm in the last few hundred years”.
Such Islamophobic comments are particularly hurtful when originating from individuals who have lived and worked in the Gulf.
Sultan Barakat, Doha Institute

“The level of hubris of the Hindutva fascists shocked people throughout the world, changing previously held opinions,” Dr Farhan Mujahid Chak, who teaches political science in the Gulf Studies programme at Qatar University, told Al Jazeera.
Princess Hend al-Qassimi, a member of the UAE royal family, warned “openly racist and discriminatory” Indians in the Gulf that they “will be fined and made to leave” the country.
In the past month, at least six Hindus working in the Gulf region have lost their jobs or have been charged for their social media posts.

About 8.5 million Indians live and work in Gulf countries, a significant number of them Hindus.
India’s trading relations with the Gulf Cooperation Council (GCC) member states – Bahrain, Kuwait, Oman, Qatar, Saudi Arabia and the UAE – has transformed considerably over the years, with the bilateral trade volume surpassing the $100b mark.
“Every year, more than $55bn are transferred to India from the Gulf countries, and more than 120 billion annually from all Muslim countries. Indians (mostly Hindus) are treated well in these countries,” Kuwait-based activist Abdur Rahman Nassar tweeted.
“In return, how are Muslims treated in India?” he asked.
Another Kuwait national, lawyer and director of International Human Rights group, Mejbel al-Sharika, tweeted that he will “adopt the cause of Muslims in India” at the UN Human Rights Council in Geneva “for free”.

India and UAE share the value of non-discrimination on any grounds. Discrimination is against our moral fabric and the Rule of law. Indian nationals in the UAE should always remember this. https://t.co/8Ui6L9EKpc
— Amb Pavan Kapoor (@AmbKapoor) April 20, 2020

Diplomatic tensions
On Monday, in what was a clear sign of the issue escalating in the Arab world, Kuwait expressed its “deep concern” over the treatment of India’s Muslims and asked the Organisation of International Cooperation (OIC) to intervene.
“Did those who commit crimes against humanity against Muslims in India and violate their rights think that Muslims in the world will remain silent about these crimes and do not move politically, legally and economically against them?” a statement by the general secretariat of the Kuwait Council of Ministers said.
Earlier, on April 18, the OIC had issued a statement, urging India to take urgent steps to “stop the growing tide of Islamophobia” in the country.
A day after the OIC statement, Modi tweeted: “COVID-19 does not see race, religion, colour, caste, creed, language or borders before striking. Our response and conduct thereafter should attach primacy to unity and brotherhood. We are in this together.”
In the week after Modi’s call for communal harmony, at least three Indian embassies in the Gulf region – Qatar, the UAE and Oman – tweeted about the shared values of “tolerance” and “pluralism” between India and the Arab world.

It is clear that fake identities are being used by forces inimical to India, to create divisions within our community. Please understand the reality and do not get swayed by these malicious attempts to sow discord. Our focus right now needs to be on COVID-19. pic.twitter.com/dVJnAr0Z4N
— India in Qatar (@IndEmbDoha) April 21, 2020

‘Country of particular concern’
Princess al-Qassimi, who has emerged as one of the most prolific Arab voices against Islamophobia in India, last week wrote a column for the Gulf News, in which she said: “The world doesn’t need another Hitler, but it needs another hero like Martin Luther, Nelson Mandela, or Gandhi.”
“Killing your brethren doesn’t make you a hero, it makes you a dictator and murderer. A snowballing movement has been started, which has reverberated across the Arab world,” she wrote in her piece, titled I pray for an India without hate and Islamophobia.

On Sunday, Mohan Bhagwat, the chief of the far-right Rashtriya Swayamsevak Sangh (RSS), in an apparent reference to the Jamaat congregation in New Delhi, said in an online speech from the group’s headquarters in Nagpur that it was “not right to blame the entire community for the mistakes of few individuals”. The RSS is the ideological mentor of Modi’s BJP.
Sultan Barakat, director of the Centre for Conflict and Humanitarian Studies at Qatar’s Doha Institute, told Al Jazeera that people in the Gulf countries “felt outraged” over the way Indian Muslims were being blamed for the coronavirus pandemic.
“Such stupid assertions angered people here, not only because it is Islamophobic but more importantly, because it is counterproductive to a global pandemic that is blind to religion and recognises no borders,” he said.
“Millions of Indians have been living in Arab countries for decades with hardly any discrimination against Indians – Hindu, Muslim or any other. Such Islamophobic comments are particularly hurtful when originating from individuals who have lived and worked in the Gulf.”
India’s former ambassador to the UAE, Talmiz Ahmed, called the Indians who posted comments against the Arabs and Muslims in India “extremely foolish individuals with very limited knowledge of politics or international affairs”.
However, BJP spokesman GVL Narasimha Rao told Al Jazeera the issue will not have a negative effect on India’s relationship with the Arab countries. “Because it is part of a propaganda and not real,” he told Al Jazeera. “This is part of anti-India and anti-Hindu propaganda by inimical elements.”
Rao’s optimism appeared to be shortlived.
On Tuesday, in its worst rating since 2004, the US Commission on International Religious Freedom urged the State Department to designate India as a “country of particular concern” over “severe violations” of religious freedom.
Although India rejected the US report, calling it “biased”, it will be hard for the country’s Hindu nationalist government to ignore a growing global concern over the targeting of India’s Muslims.
Continue Reading…