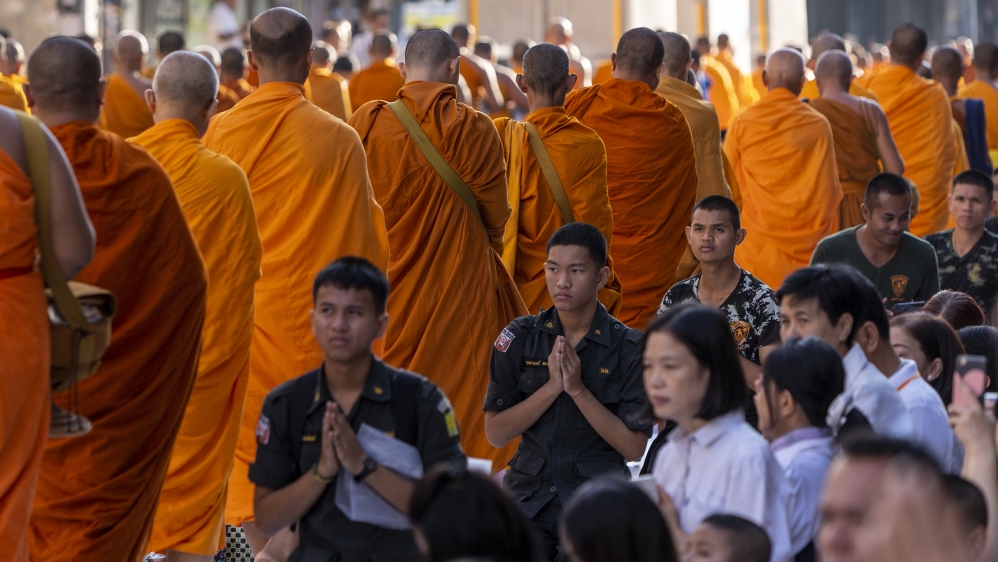 Korat, Thailand – The day of horror started like any other Saturday for Tanatit, “Tok”, 43, a moto-taxi driver who works in front of Nakhon Ratchasima’s Terminal 21 shopping centre.
He was sitting with a group of other riders – making light of another busy day – chatting, laughing between rides. The men could not have known they were about to witness a massacre.
“He just walked up and started shooting. He killed two people right here,” Tok told Al Jazeera, pointing to a street curb just metres away. “He then walked inside and kept shooting. Everyone started running,” he said.
More:

Once the shooter entered the centre, Tok immediately began helping the wounded by carrying them away, trying to get them to safety before emergency responders arrived.”One was shot through both legs and hip. The other was shot through the shoulder and chest,” he recalled of the wounded he tried to help.
The shooting
It was around 3pm Saturday, February 8, when Jakrapanth Thomma, 32, a sergeant and expert marksman in the Thai armed forces, began his rampage. He first shot and killed his commanding officer, Colonel Anantharot Krasae over a real estate deal gone bad. Then he raided an unprotected weapons bunker at a nearby army base before advancing to Terminal 21 where he began to shoot civilians indiscriminately.
The attack carried on through the night as Thomma went from floor to floor, executing anyone he found hiding in the centre. Finally, in the early hours of Sunday, authorities dispatched the country’s top team of special forces to clear the complex. After about 18 hours of carnage, Thomma was finally shot dead.
Many people are angry. But most citizens of Nakhon Ratchasima – also known as Korat – are quietly dealing with lingering trauma.
One week after the tragedy, the country is still grappling with what happened. Thomma’s motive is still opaque. And the nation is profoundly disturbed over the question of how a lone soldier went from violently carrying out a vendetta over a financial dispute to killing dozens of innocent civilians.
Some say Thomma is symptomatic of a military out of control –  a product of a system that too often seems to encourage violence. Others say the root of the issue comes down to a deadly combination of unchecked mental health issues and access to firearms.
‘Trying our utmost’
In response to the tragedy, Thailand’s Department of Mental Health (DMH) has dispatched teams to support victims, those who have lost loved ones and anyone who is affected by the event. Health experts agree that the shooting will have long-term effects on Thai society.
Public Health Minister Anutin Charnvirakul told Al Jazeera the government was doing everything possible to meet Korat’s needs.
“We’re trying our utmost to make sure all patients are taken care of with the highest level that we can. Regarding PTSD, as you can see, we have dispatched psychiatrists and a team to be here and to give consultations to all the people who came in. We’re trying to console them, to let them feel that it has passed and they should come back to live their lives normally,” he said.

BackPage 1 of 2Next →
In this article:Aftermath, this'