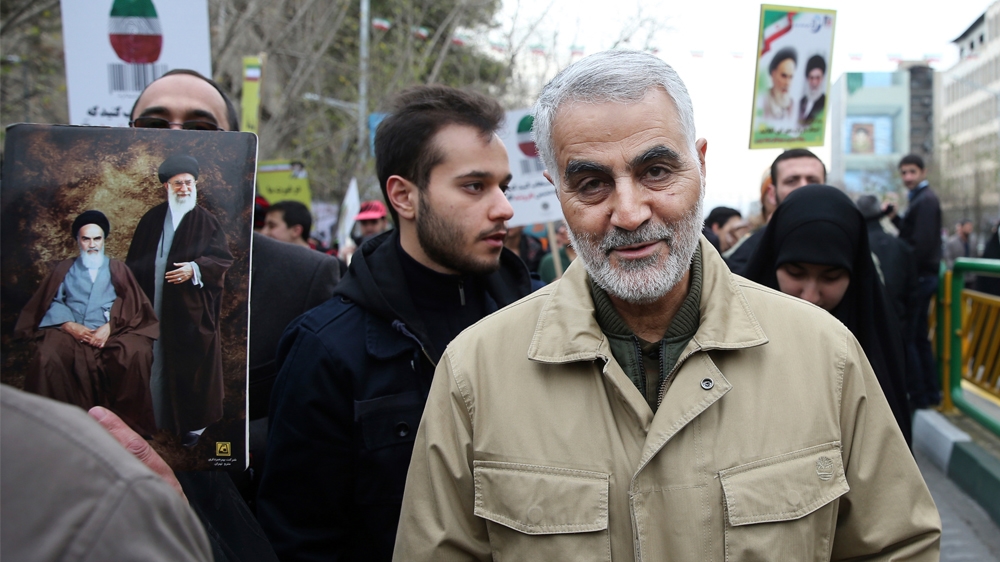 A number of international leaders have called for restraint and de-escalation following the targeted killing of Iran’s top general, ordered by US President Donald Trump, as Iran’s allies warned that the killing could lead to conflict.
Qassem Soleimani, head of Iran’s elite Revolutionary Guard Corps (IRGC) Quds Force, was killed in a US pre-dawn air raid at Baghdad’s international airport on Friday.
More:

US deploys more troops to Iraq after Baghdad embassy attack

Iran rejects US accusation of being behind Baghdad protests

US targets pro-Iran militia base in Iraq, Syria raids

At least six others were killed, including Iraqi militia commander Abu Mahdi al-Muhandis, an adviser to Soleimani.
The high-profile killings come amid a sharp escalation in Iran-United States tensions.
Regional and world leaders have largely reacted with alarm, concerned that the US killing of Soleimani could ignite a serious escalation in the region and possibly lead to war.
Iran
Following the attack, Iran’s supreme leader Ayatollah Ali Khamenei warned the US of “harsh retaliation”.
Javed Zarif, Iran’s foreign minister, tweeted his response, saying: “The US’ act of international terrorism, targeting & assassinating General Soleimani – THE most effective force fighting Daesh (ISIS), Al Nusrah, Al Qaeda et al – is extremely dangerous & a foolish escalation.
“The US bears responsibility for all consequences of its rogue adventurism.”
Iraq
Iraqi caretaker Prime Minister Adel Abdul Mahdi condemned the attack, calling it an “aggression” on  Iraq that would “spark a devastating war”.
“The assassination of an Iraqi military commander is an aggression on Iraq as a state, government and people,” Abdul Mahdi said in a statement.
“Carrying out physical liquidation operations against leading Iraqi figures or from a brotherly country on the Iraqi lands is a flagrant violation of Iraq’s sovereignty and a dangerous escalation that triggers a destructive war in Iraq, the region and the world,” Abdul Mahdi said.
He added that the attack was also a “flagrant violation of the conditions authorising the presence of US troops” on Iraqi soil.
Syria
The Syrian government accused Washington of trying to fuel conflict in the Middle East.
Syria is “certain that this cowardly US aggression … will only strengthen determination to follow in the path of the resistance’s martyred leaders,” a foreign ministry official was quoted as saying by the state news agency SANA.
The official described the killings as “a serious escalation of the situation” in the region and accused the US of resorting to “the methods of criminal gangs”.
Turkey
The Turkish foreign ministry said that the killing of Soleimani will increase insecurity and instability in the region.
In a written statement, the ministry said it was deeply concerned by the rising tensions between the US and Iran, and that turning Iraq into an area of conflict will harm peace and stability in the region.
“Turkey has always been against foreign interventions, assassinations and sectarian conflicts in the region,” the ministry said.
Russia
Moscow warned that the US killing of Soleimani would increase tensions across the Middle East.
“The killing of Soleimani … was an adventurist step that will increase tensions throughout the region,” news agencies RIA Novosti and TASS quoted the foreign ministry as saying.
“Soleimani served the cause of protecting Iran’s national interests with devotion. We express our sincere condolences to the Iranian people.”
United Nations
UN Secretary-General Antonio Guterres is deeply concerned by the recent rise in tensions in the Middle East, his spokesperson said in a statement.
“The secretary-general has consistently advocated for de-escalation in the Gulf,” Farhan Haq said. “This is a moment in which leaders must exercise maximum restraint. The world cannot afford another war in the Gulf.”
China
China appealed for restraint from all sides, “especially the United States”.
“We urge the relevant sides, especially the United States, to remain calm and exercise restraint to avoid further escalating tensions,” foreign ministry spokesman Geng Shuang said at a daily news briefing.
Israel
Israeli Prime Minister Benjamin Netanyahu said the US had the right to defend itself by killing Soleimani.
“Just as Israel has the right of self-defence, the United States has exactly the same right,” Netanyahu said in a statement issued by his office on Friday
“Qassem Soleimani is responsible for the death of American citizens and many other innocent people. He was planning more such attacks.”
Hezbollah
Hezbollah leader Sayyed Hassan Nasrallah called for the death of Soleimani to be avenged.
“Meting out the appropriate punishment to these criminal assassins … will be the responsibility and task of all resistance fighters worldwide,” Hassan Nasrallah said in a statement.
“We who stayed by his side will follow in his footsteps and strive day and night to accomplish his goals,” Nasrallah said.
Hamas
Hamas, the Palestinian group which administers the besieged Gaza Strip, issued a statement saying “Soleimani was one of the leading Iranian army officials who had an important role in supporting the Palestinian resistance”.
“We condemn these continued American crimes sowing tensions in the region in service of the Israeli enemy,” it said.
The Palestinian Islamic Jihad group offered its condolences to the Iraqi people for the death of Abu Mahdi al-Muhandis, describing him as one of the symbols of Iraqi liberation from the US occupation.
“This Iraq, which will always remain disobedient to American hegemony and control, will always remain Arab with its fighters and greater than the occupation,” a PIJ statement said.

NATO
The NATO military alliance said it is monitoring the situation in Iraq closely with an eye on the safety of its training mission there.
“NATO is monitoring the situation in the region very closely. We remain in close and regular contact with the US authorities,” spokesman Dylan White told AFP.
“At the request of the Iraqi government, NATO’s training mission in the country is helping to strengthen the Iraqi forces and prevent the return of ISIS,” he said.
“The safety of our personnel in Iraq is paramount. We continue to take all precautions necessary.”
Germany
Chancellor Angela Merkel’s spokeswoman Ulrike Demmer urged restraint and de-escalation.
“We are at a dangerous point of escalation. It is now important through prudence and restraint to contribute to de-escalation,” Demmer said.
Foreign Minister Heiko Maas said the aim now was to prevent further escalation across the Middle East.
“We are making use of our diplomatic channels to Iran and to other states in the region,” he said. “Since this morning we have been in close contact with our British and French partners and with other European countries on how we can best work to calm the situation.”

BackPage 1 of 2Next →
In this article:reacts, World