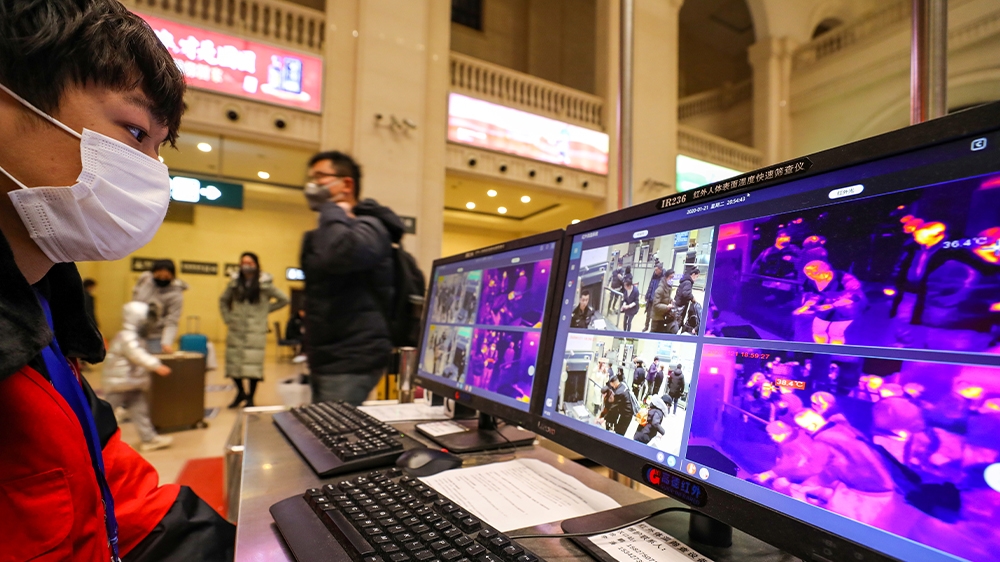 China told the 11 million residents of Wuhan on Thursday that they would no longer be allowed to leave, as the authorities step up efforts to halt the spread of a new coronavirus that originated in the city in December and has now killed 17 people and infected 571.
“Without a special reason, city residents should not leave Wuhan,” the central city’s special command centre to combat the virus said, according to state media.
More:

All you need to know about the Wuhan coronavirus

The move is meant to “effectively cut off the virus spread, resolutely curb the outbreak and guarantee the people’s health and safety,” the notice said, according to the official Xinhua news agency.
Stations and the airport were closed from 10am (02:00 GMT) with buses, the metro system, ferries and long-distance shuttle buses also suspended. All public gatherings were cancelled.

The decision came as hundreds of millions of people are travelling across China for the Lunar New Year holiday, which starts on Friday, and state television said the number of confirmed infections had risen to 571.
Most patients are in Wuhan and the surrounding province of Hubei, but cases have appeared elsewhere in China and in countries including Thailand, South Korea and the United States.
WHO decision delayed
In Geneva, the World Health Organization (WHO) delayed its decision on whether to declare the outbreak a global health emergency and asked an expert committee to continue meeting for a second day on Thursday.
“We need more information,” WHO Director-General Tedros Adhanom Ghebreyesus said.
The agency defines a global emergency as an “extraordinary event” that constitutes a risk to other countries and requires a coordinated international response.
When asked about Wuhan’s public transport shutdown, WHO chief Tedros said authorities were probably acting to prevent transmission and mass gatherings.
“We cannot say they have done something unusual,” he said.
Reporting from Hong Kong, Al Jazeera’s Adrian Brown said China was keen to show the WHO that it had the outbreak under control.
“If the WHO does declare a global public health emergency then that’s going to harm China’s international reputation,” he said. “That’s going to mean a big loss of face for China so I think China at this meeting is doing all it can to convince members that it does have this situation under control.”
Wuhan’s tourism and culture department cancelled all group tours until February 8, Xinhua said.

It is now very clear from the latest information that there is at least some human-to-human transmission of #nCoV2019. Infections among health care workers strengthen the evidence for this.
— World Health Organization Western Pacific (@WHOWPRO) January 21, 2020

Tourist attractions and star-rated hotels must also suspend all large-scale activities until that date, it added. The provincial library and two leading local theatres cancelled exhibitions and performances, while four museums have suspended operations until further notice, it said.
The annual prayer-giving at the city’s Guiyuan Temple, an important Lunar New Year event that attracted 700,000 people last year has also been scrapped.
The hashtag “Wuhan is sealed off” was trending on China’s microblogging website Weibo with more than 30 million views. “Once there’s a suggestion of a new development, the first thought is to maintain stability” and stop rumours, “hoping that by muffling it, it will go away,” one user said on Weibo. Comments deemed politically sensitive are regularly censored on the social media platform.

Others commended the government’s response, with one person saying “we should spare no effort in supporting all of the country’s policy decisions”.
The illness comes from a newly-identified type of coronavirus, a family of viruses that can cause the common cold as well as more serious illnesses, such as the SARS outbreak that spread from China to more than a dozen countries in 2002-2003 and killed about 800 people.
Such viruses are zoonotic and originate in animals – the Wuhan outbreak is thought to have started in a now-closed seafood market where illegal wildlife was also sold – but there are concerns the infection could now be passed between people.
‘Under control’
Authorities in Thailand on Wednesday confirmed four cases – a Thai national and three Chinese visitors.
Japan, South Korea, the United States, Taiwan and Macao, a former Portuguese colony that is a semi-autonomous Chinese city, have all reported one case each. All of those affected were from Wuhan or had recently travelled there.
“The situation is under control here,” Thai Public Health Minister Anutin Charnvirakul told reporters, saying there were no reports of the infection spreading to others. “We checked all of them: taxi drivers, people who wheeled the wheelchairs for the patients, doctors and nurses who worked around them.”
Hong Kong confirmed its first case on Thursday.
Dr Peter Horby, a professor of emerging infectious diseases at Oxford University, said there were three criteria for the outbreak to be declared an international emergency: it must be an extraordinary event, there must be a risk of international spread, and a globally-coordinated response is required.
“In my opinion, those three criteria have been met,” he said.
In Wuhan, pharmacies limited sales of face masks to one package per customer. Residents said they were not overly concerned as long as they took preventive measures.
“As an adult, I am not too worried about the disease,” Yang Bin, the father of a seven-year-old, said after buying a mask. “I think we are more worried about our kids.”

People in Wuhan have been queuing to buy face masks with restrictions imposed on the number they are allowed to buy. [Dake Kang/AP Photo]

Medical workers in protective suits could be seen carrying supplies and stretchers into Wuhan Medical Treatment Center, where some of the patients are being treated.
Officials said it was too early to compare the new virus with SARS or MERS, or Middle East respiratory syndrome, in terms of how lethal it might be. They attributed the spike in new cases to improvements in detection and monitoring.
“We are still in the process of learning more about this disease,” Gao Fu the director-general of China’s Center for Disease Control and Prevention said at the news conference.
Gao said officials are working on the assumption that the outbreak resulted from human exposure to wild animals being sold illegally at a food market in Wuhan and that the virus is mutating. Mutations can make it spread faster or make people sicker.
One veteran of the SARS outbreak said that while there are some similarities in the new virus – namely its origins in China and the link to animals – the current outbreak appears much milder.
Dr David Heymann, who headed WHO’s global response to SARS in 2003, said the new virus appears dangerous for older people with other health conditions, but does not seem to be as infectious as SARS.
“It looks like it doesn’t transmit through the air very easily and probably transmits through close contact,” he said. “That was not the case with SARS.”
Continue Reading…